Today's trading session is effectively data-free in the US with the never-market-moving International Trade report the only data on the calendar.  Bonds were willing to respond to broad economic implications of covid policies in China as well as econ data in Europe, but none of the above was worth a range breakout for Treasuries in the overnight session.  Domestic trading begins with yields shying away from another attempt at the low end of the range (marked by 3.50% in terms of 10yr yields).  It wouldn't be a surprise to see prevailing ranges hold until next week's CPI/Fed combo on Tuesday and Wednesday.

Speaking of the range, it's worth considering the scope of a potential rally if next week's events are as bond friendly as possible.  Short term rallies are typically limited to 20-30bps a day in extreme scenarios and almost never more than 1% in a week.  Such a rally is likely not possible based solely on next week's events, even if they're as bond-friendly as possible.  Even in March 2020, it took 2 weeks for the 1% rally to transpire and that was arguably a much bigger deal than anything on the horizon might be. 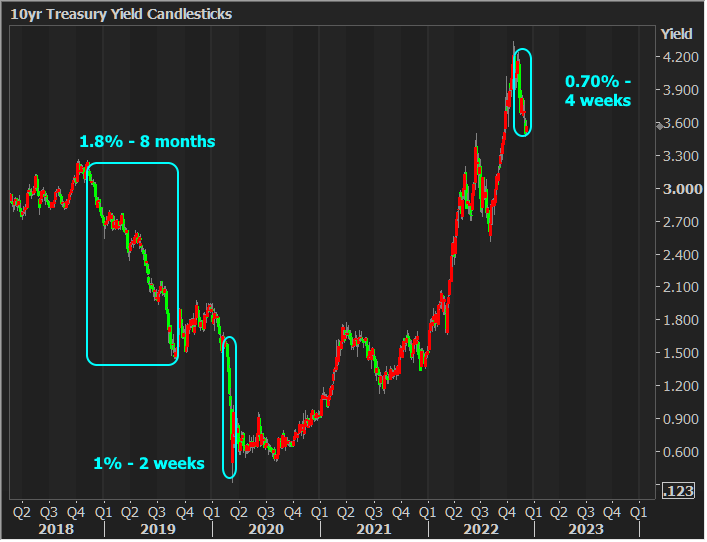 On the other end of the spectrum, the 2019 rally covered almost 2% in about 8 months.  It was extremely gradual and lacked any sensational market motivation apart from the trade war headlines.  Frankly, this would be a slow pace for an environment where the market rapidly repriced a new inflation reality.  As such, let's consider a more intermediate target roughly 30bps below the recent lows (the sort of level that might only take a few days to achieve in the best case scenario).

After breaking below 3.50%, 3.18% jumps off the screen as the scene of two major pivots and as an obvious ceiling earlier in the year.  3.50% was the next obvious ceiling and pivot point on the way up and if we were choosing a level for the new top of the range, that would be the best candidate in a rally scenario. 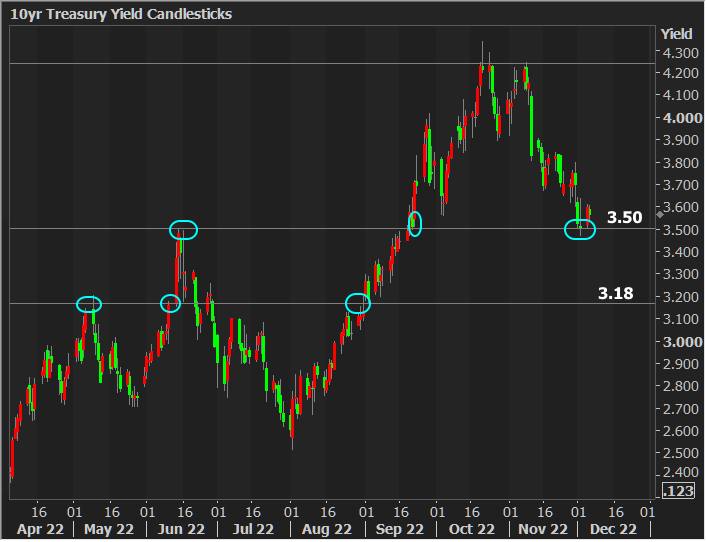 To be very sure and very clear, there are scenarios where 3.50% remains a floor and yields move back up toward 4%.  That's not likely to happen in a single week, but if successive data painted an increasingly inflationary picture, it's a potential scenario that should be considered as the foil of the bullish scenario presented above.