The day is getting off to an interesting start as stronger Retail Sales data initially pushed yields higher.  That weakness lasted for less than half an hour before buyers came crashing into the 9am hour on the back of a larger, ongoing rally in European bonds as well as ongoing pockets of short-covering momentum.  Curve trading is also back in fashion with 2s vs 10s reaching the most inverted levels of this cycle.  Indeed, the curve began flattening aggressively after the data (i.e. 10yr doing better than 2yr), which ultimately contributed to the rally in 10s.

Here's how the curve trading looks in a chart: 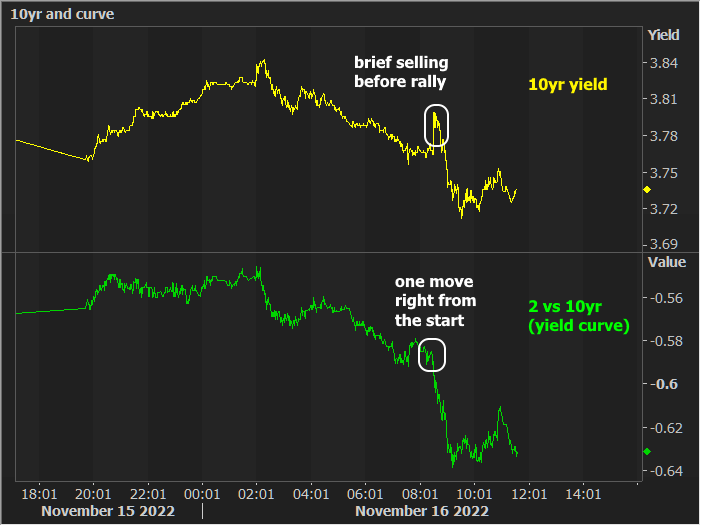 Essentially, what's happening here is an initial sell-off in both 2s and 10s, with 2s selling slightly faster (any time the green line is moving lower, 2s are selling faster or buying slower than 10s).  As the yellow line begins to move lower, it signifies the market focusing its trading of this data on the short end of the curve.  But why?

To some VERY small extent, stronger retail sales data carries an implication for Fed policy.  Indeed, Fed Funds Futures saw a slight bump at 8:30am (less than 0.02% in terms of implied policy rate movement).  2s are more tied to Fed Funds, so they have a harder time recovering.  Higher Fed Funds Rates eventually imply slower growth and lower inflation.  This is, after all, the biggest driving force behind the ongoing curve inversion (i.e. shorter term rates have to be higher due to Fed Funds Rate while longer-term rates are pricing in lower growth and inflation in the future).