Bonds Daring The Fed To Stay The Course

The bond market began the day by doing its best impression of lover scorned, threatening self harm unless it gets some sort of validation from its former partner (aka, the Fed).  At the same time, the bond market is realizing its former partner isn't in a position to offer that validation.  The best we could have hoped for at the outset would be for some qualitative acknowledgement that the Fed is getting closer to considering leveling off.  Failing that, we would need whoever was selling to finally stop.

As the AM hours wrap up, we have both.

The Fed's piece is pretty simple.  It can be summed up with a few newswires from Mary Daly:

FED'S DALY: WANT TO AVOID AN 'UNFORCED DOWNTURN' BY OVERTIGHTENING

DALY: IF YOU KEEP TIGHTENING UNTIL YOU SEE LAGGING VARIABLES OF UNEMPLOYMENT, INFLATION RETURN TO STEADY STATE, COULD EASILY OVER-TIGHTEN

DALY: NOW WE ARE IN THE STAGE OF POLICY WHERE WE NEED TO BE THOUGHTFUL

DALY: SLOWING RATE HIKES SHOULD BE CONSIDERED AT THIS POINT

I cannot emphasize enough how large of a departure this is from the recent ultra-unanimous Fed communications.  All speakers have been reading from the same script and none of them have come anywhere close to saying something like "slowing hikes should be considered at this point."

Even before Daly's comments, bonds were already finding their footing on a WSJ tweet regarding the prospect.  And even before that tweet, everyone else was thinking the market was trying to force the Fed to say something like this on the final day before they enter their blackout period ahead of the next meeting.

And even if there were no tweet and no Fed comments, the market was already concluding that the "sell first, ask questions later" approach in the long end of the curve carried implications for the Fed's rate hike outlook.  Fed Funds Futures had their sharpest rally since the BOE intervention late last month.  Actually, it was the sharpest rally in a 15 minute window that I can see since July. 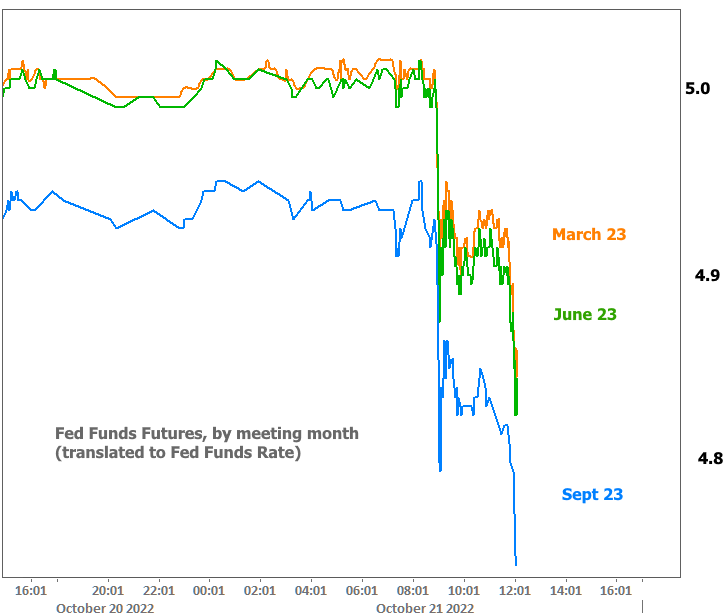 The other elephant in today's room is Japan.  Specifically, Yen has been undergoing an epic crash, ultimately reaching the weakest levels since 1990 this morning.  It's likely we'll learn that the Bank of Japan sold dollar-denominated assets in order to arrest the slide in Japanese currency.  The eventual swing in USD/Yen was not a small one this morning: 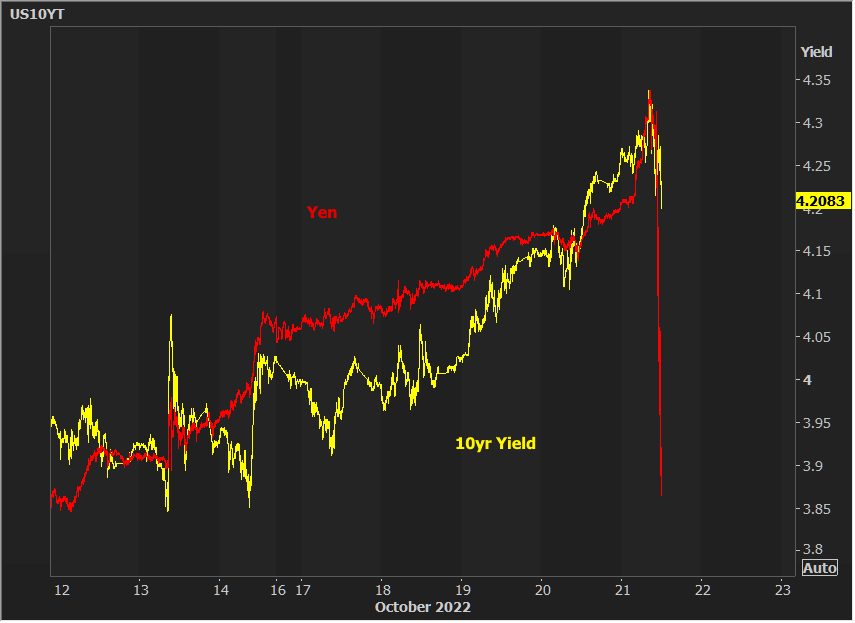