From Bad to Worse, And Running Out of Ways to Blame The UK

Today begins with bond yields at new 14 year highs with the ostensible culprit being the inflation reading in the UK overnight.  While there's no question the data served as a catalyst for additional selling in the overnight trading session, it's not on the same level as the late September fiscal drama when it comes to big, thematic market movers.

A chart of this week's relative changes in US vs UK bonds is downright surprising given the extent to which UK trading has influence US markets in October. 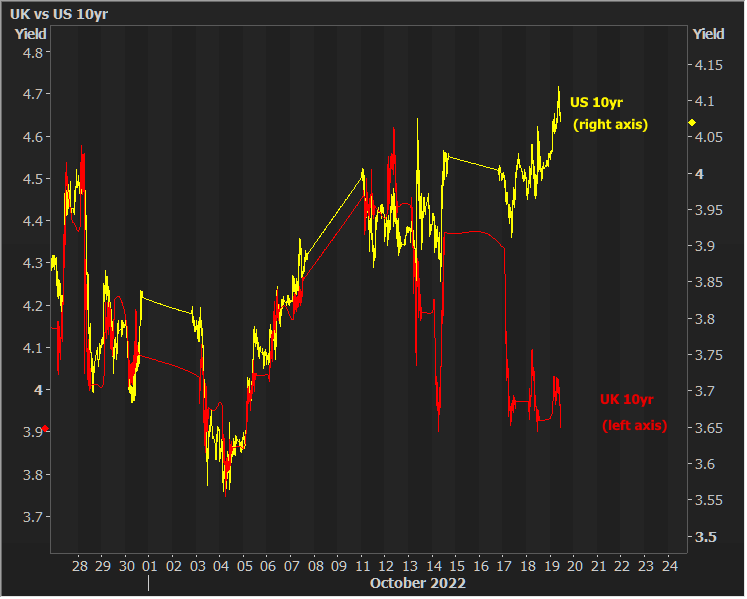 In fact, the chart above is downright puzzling.  If the drama has been in the UK, and UK yields are about 60bps off their highs, why are US yields a few bps higher?  This is a very good question, but one that is easier to answer if we zoom out and put both securities on the same axis.

In other words, US 10s have been trending higher in an almost perfectly straight line.  UK yields snuck up from behind, caused a ton of volatility and both have now returned to "as if it never even happened" status.  Remember the uptrend line we'd been tracking for most of the past two months?  Remove the UK drama and... 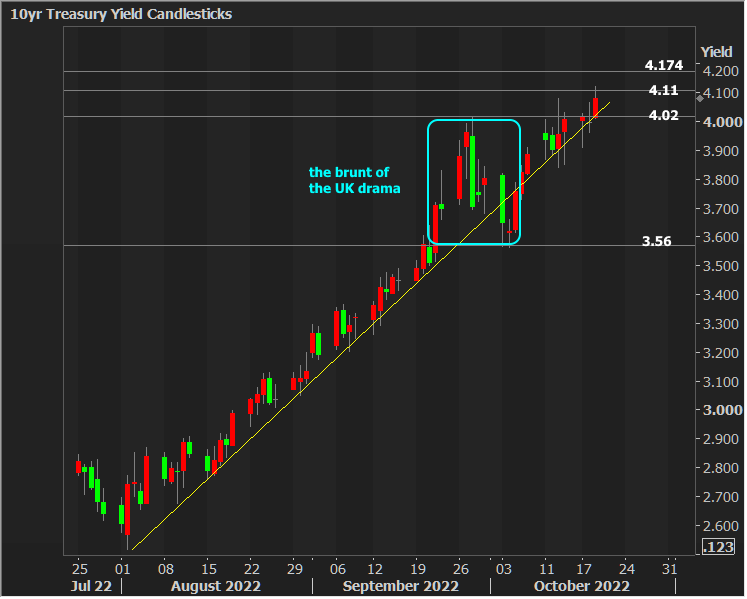 As for the "why" behind the ongoing uptrend, that's more of an open question.  Apprehension is certainly part of it.  Upcoming concerns like today's 20yr bond auction, corporate issuance, corporate earnings, and another pre-Fed-meeting blackout period starting this weekend are all worth considering.  While we have, at times, seen evidence of  buyers stepping in when yields moved over 4%, that clearly hasn't been enough to sustain a ceiling.  We're increasingly inclined to give more credit to short-covering for the early October recovery and to the re-setting of the inflation data countdown clock (the one that won't officially start until core inflation moves down from 0.6% month-over-month) for the weakness seen after last week's CPI and Consumer Sentiment data.