While there's no way to know exactly when it will happen, there's always some point at the end of an epic sell-off where prices have dropped enough to attract buyers and sellers have had their fill.  A technician might simply say bonds were so oversold that they couldn't sell anymore, but such conclusions are typically made in hindsight.  It's important to understand that these sorts of bounces can look big and meaningful at first, but may prove to be nothing more than temporary.

Today is already at risk of providing an example as an EU bond sell-off in the morning pulled longer term Treasury yields into negative territory.  Even if bonds manage to rally back substantially, they'd still be nowhere close to challenging the prevailing uptrend, nor suggesting a shift away from oversold territory (2 things that become increasingly likely as the sell-off continues). 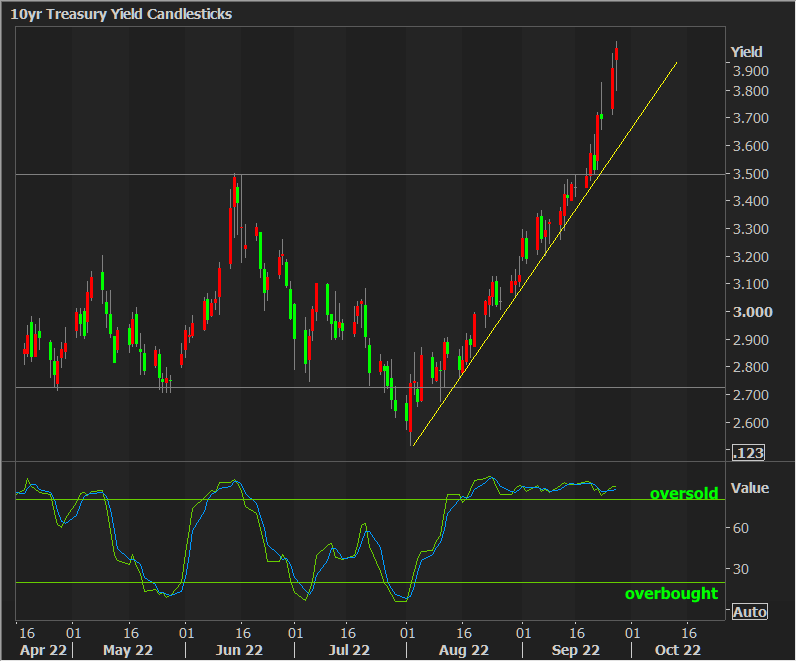 While it's always the case that additional weakness incrementally increases the odds of a bounce in the bond market, it's also true that it's only in relative terms.  We can never truly know where the odds are.  Perhaps there's the probability increases from 85 to 90% with today's weakness, or perhaps it's up to 20% from 15%.  The latter would be a devastating realization, but consider the following:

And despite all that, every Fed speaker who's hit the wires over the past few days has abstained from any attempt to mitigate the volatility.  In fact, several have reiterated that, although rates are already in restrictive territory, they will be going higher and staying higher until inflation is convincingly lower and the economic data shows evidence of the Fed's restrictive policies.

In the mortgage world, things continue to be even more of a mess than Treasuries.  Depending on when you look and how you run the math, MBS spreads vs Treasuries hit their widest levels since the GFC today.  Coupon liquidity has been slow to come online, but we're finally seeing 5.0 coupons overtake 4.0s and 5.5 coupons just overtook 3.5s. 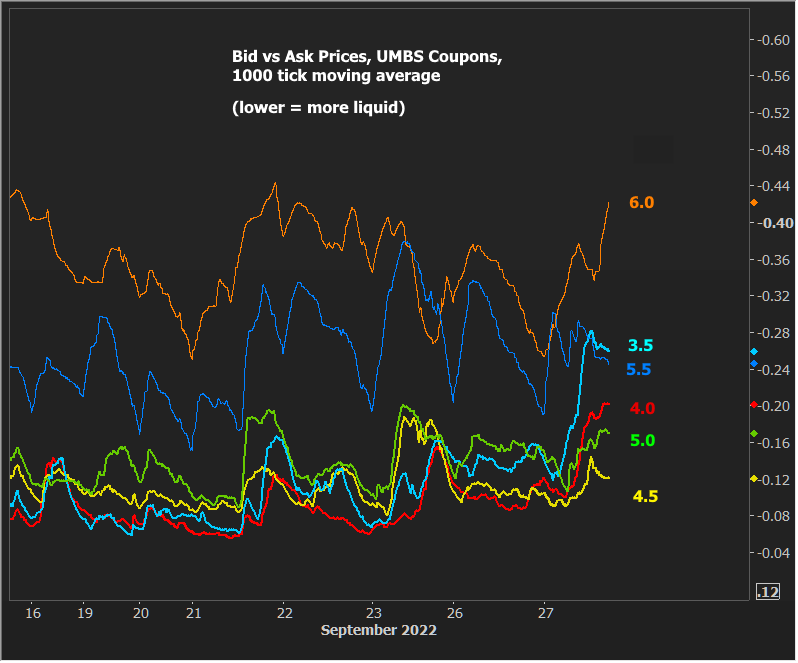 If you're thinking "hey... even after adjusting for the fact that rates can be 1.125% higher than MBS coupons, most of those are irrelevant to the rates I'm seeing," you're totally right.  If you were solely trying to determine rate sheet pricing, you'd probably only be going as low as 5.5 coupons.  But the lower, more liquid coupons nonetheless serve as the foundation for arriving at prices of higher, less liquid coupons.  This is part of the challenge faced by rate-setters at mortgage companies.  Their job is akin to designing a paddock for real live dinosaurs based only on archeological findings and math (and we all know how that turned out in the movie).