This week's decidedly European theme was only reinforced overnight as bonds benefitted from weaker PMI data in Germany, France, and the overall Eurozone.  Not to be outdone, weak US PMI data (specifically in the services sector) added to the gains for bonds.  With these gains, yields are suddenly much closer to challenging the lower boundaries of the big, sideways, summertime range (or Spring/Summer range considering it began in early April, technically). 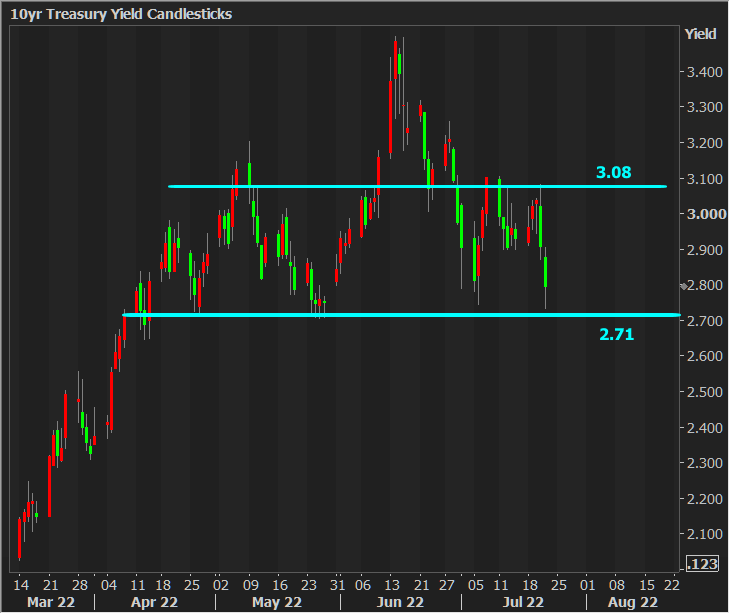 With the past 2 days completely traversing that range, bonds may struggle to muster a big breakout with the Fed on deck next Wednesday.  Indeed we've already seen a bit of hesitation after this morning's US PMI data added to the overnight rally.  Bonds likely need corroboration from lower inflation in the coming 1-2 months before truly confirming a range breakout, but at the same time, it's hard to overstate how abruptly certain economic reports seem to be shifting.

Market psychology has been surprisingly willing to shift as well.  Fed Funds Futures now see the Fed Funds Rate at roughly the same level after the September meeting as they did before the June 13th CPI release.  The end of year expectation has moved 25bps lower in the past 2 days due to econ data, and the June 2023 expectation moved down the better part of 50bps!  The following chart implies that traders see the Fed cutting rates back down to September's levels by the middle of 2023.