This week's economic data is primarily focused on the housing market with NAHB, Housing Starts, and Existing Sales on the first 3 days respectively.  While that's interesting to those in the industry, these reports don't tend to be huge market movers.  Thursday's European Central Bank (ECB) announcement is a bigger deal as it's expected to raise rates for the first time in 11 years.  There's even some debate about a 25 vs 50bp hike, thus opening the door for some volatility.  A virtually data-free Friday could end up seeing volatility as traders position for next week's Fed announcement.

Pre-Fed positioning was the order of business last week as CPI pushed expectations higher before Fed speakers (especially Waller) and Consumer Sentiment ushered a drop in rate hike expectations by the end of the week.  Whereas expectations were ramping up for a 100bp hike next week, they ultimately fell back down to 75bps--the current consensus. 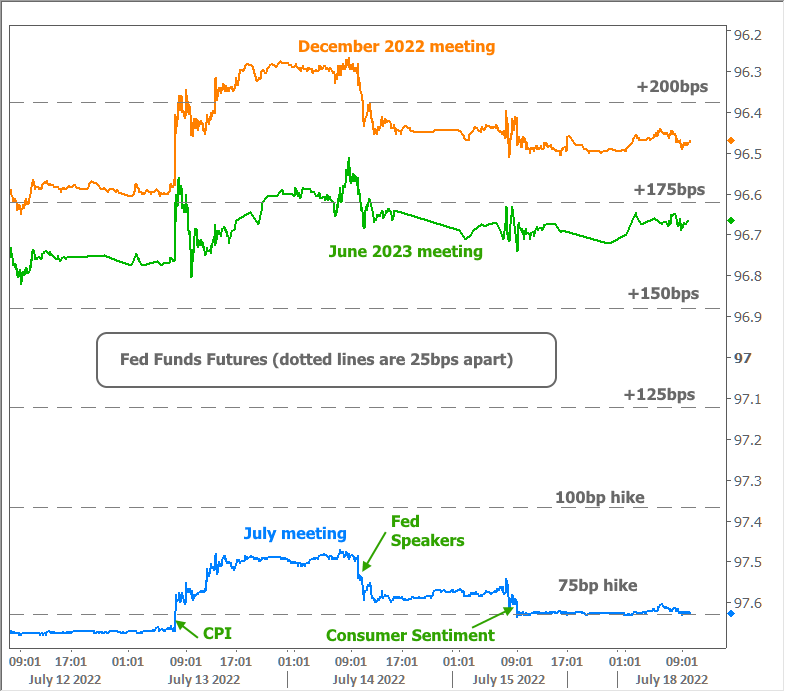 Bonds may feel like they're experiencing quite a bit of volatility, but it remains well within recent ranges.  Last week suggested boundaries of roughly 2.90% on the low end and 3.10% on the high end.  Adding another 2 weeks to the look-back expands that range to a full 50bps (2.75 - 3.25).

Bonds are starting out weaker today, with 10yr yields up more than 8bps and MBS down roughly a quarter of a point.