Lots at Stake With Important Inflation Data This Week

Heading into the new week early this morning, Treasuries refused to move any higher than Friday's highs and ultimately moved lower as they followed an EU bond rally.  Gains continued at the start of the domestic session, following the 2 main opening bells (CME at 820 and NYSE at 930am).  With yields down as much as 8bps in early trading, this is a surprisingly strong start with Treasury auctions and CPI data looming in the next 2 days.

It's strong enough to consider that yields could already be making a case for a lower ceiling than the mid-June levels suggested.  There are no perfectly well-behaved technical levels at the moment, but if we treat the ceiling as a range of yields from 3.08 to 3.17 and the floor from 2.71-2.80, it would capture most of the trading since mid-April and only leave out the wildest moments from mid-June. 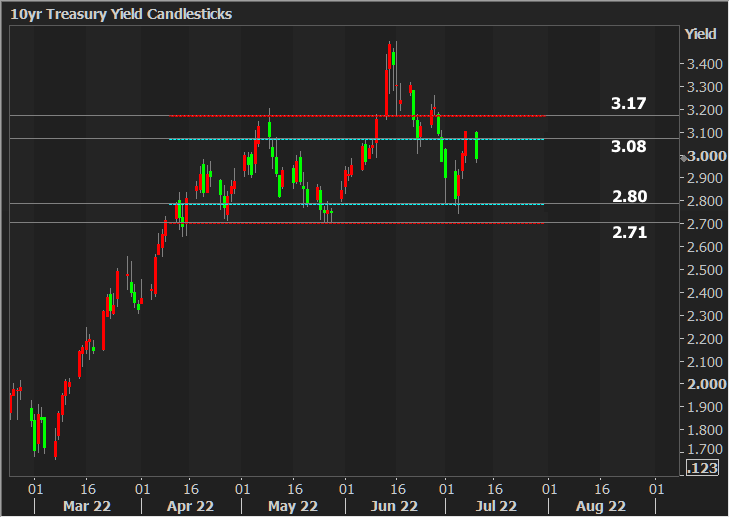 Ultimately, the week will depend on the outcome of several inflation reports.  The first one, Wednesday's CPI, is also by far the most important.  Producer prices follow on Thursday and the inflation expectation component of the Consumer Sentiment data hit on Friday morning.  If CPI hasn't already sent a strong enough message by mid-week, this trifecta of reports should go a long way toward helping the market pick a winner between 50bps and 75bps for the next Fed rate hike.  It should also offer a strong comment on how high or low the ceiling should be for the trading range in bond yields.

Today's calendar is essentially blank with only the 3yr Treasury auction at 1pm.  Tomorrow's 10yr auction has much more market movement potential.