For the first time in months (and longer than that if we factor out the artificial/temporary boost from the Ukraine flight to safety) bond yields are in the lower half of their range over a 4 week time frame. In fact, really only April 25, 26, 27 were noticeably better than today. The 2.83% technical level provides a convenient dividing line for that bull vs bear debate, but what has the bulls out in force on this auction week with higher consumer inflation?

This morning's producer price index might provide half a clue by suggesting that inflation inputs are indeed shifting into a tamer gear. Beyond that, Occam's Razor suggests it's only natural to see some moderation after a slew of Fed speakers hit the wires with various iterations of "a few hikes and then reassessing" as well as various notions of the balance sheet shrinkage only needing to go so far.  What the heck does all that mean?

It's a bit complicated at first glance, so let's try to make some sense of it (I will discuss it more in the video today as well).  First off, the Fed introduced the notion of curtailing balance sheet normalization at some point in the process.  This was a new inclusion in the recently updated normalization principles.  It means that although they will indeed be reinvesting fewer bonds, at some point, they'll return to the current 1:1 reinvestment ration (i.e. every dollar that comes in from refis, monthly payments, and payoffs will be reinvested into the MBS market).  There are currently very big numbers and wide ranges being thrown around on this topic, such a Fed speaker who said the balance sheet could drift down to $1-2 trillion.  Well that's a trillion dollars of difference!  Kind of a big deal if it's $2 trillion instead of $1 trillion, eh?

As for the data-driven volatility of the past few days, the most interesting move was a preemptive drop in inflation expectations that preceded the  CPI report.  This largely traced oil prices, and it exclusively explains the early week Treasury rally.  The lower oil and inflation expectations can be seen at the bottom of the following chart.  The concomitant drop in 10yr yields is at the top.  The flat green line in the top section ("real" or "inflation-adjusted" yields) means that inflation expectations were the only drivers. 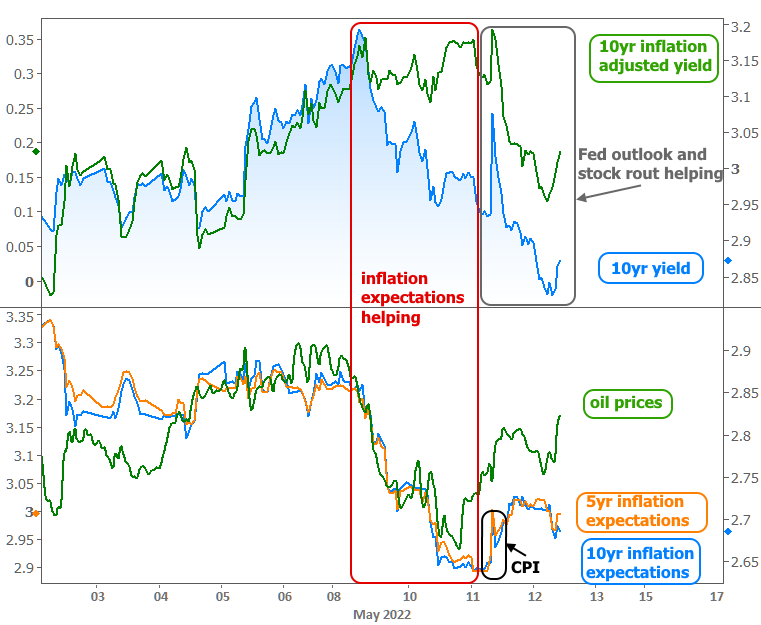 After that, we can see that CPI really didn't rock the bond market in too terrible a way.  Inflation expectations rose logically, but yield actually continued to fall.  That's the part of the chart where we point out the Fed outlook and stock rout helped real yields move lower.  In other words, rates were falling in spite of inflation ticking up a bit.  The "Fed outlook" in this case refers to the moderation in the tone of comments from recent Fed speakers (i.e. 2-3 hikes and re-asses, plus the comments about normalization eventually being curtailed).

Any way you slice it, this is the newest, latest, greatest attempt at big picture consolidation.  A break below 2.83 would be another step in the right direction in that regard while a break below 2.72 (with confirmation from the following session) would act as more forceful evidence that the ceiling is in for now.