MBS Live Morning: Bonds Dressed Up But Nowhere To Go Just Yet

If only the bond rally of the past 2 days had begun next Monday...  Due to its "one week early" timing, the result has been a technical correction that matches the most recent correction in terms of scope (i.e. yields dropped as much over the past 2 days as they did back at the end of March), but one that has a hard time making a case for additional gains until the Fed confirms (or microscopically softens) the threats made in the latest round of speeches.

Between now and then, there is a Treasury auction cycle to deal with, corporate earnings, PCE inflation, ongoing uncertainty surrounding the economic fallout from the Ukraine war, and similar levels of uncertainty surrounding the fallout from China's current covid struggles.  So far this morning, traders have rejected a 3rd day of rallying and yields are retreating back into the Mon/Tue range.  In a way, this is actually a good thing based on the busy chart below.

The chart shows 10yr candlesticks with a stochastic oscillator at the bottom.  What we're looking for in that stochastic section is for the line to trend diagonally to the point that it moves past the middle of the stochastic range and creates a good amount of empty space underneath it.  The only obvious examples are in late 2016 and late 2020 (into early 2021).  These examples collide with the vertical teal lines that mark a big change in stochastics that take the line almost all the way back to overbought territory in one move.  Both examples marked the shift away from a big rate spike trend and resulted in several months of stability and/or gains.  (NOTE: the white/red line combos do the same thing in reverse, but they're not really as obvious in terms of creating that big gap like those seen under the yellow lines).

All that to say that the current selling spree is arguably creating yet another example of one of those big gaps as the lowest stochastic values trend higher.  In that sense, seeing one more bounce on the most recent yellow line would actually be useful in that it could set us up for a more compelling big-picture reversal, and perhaps even one that is more reliably identified.  If past patterns repeat, we'd be looking for that unfriendly bounce within the next month, and then a friendly breakout a month or two after that. 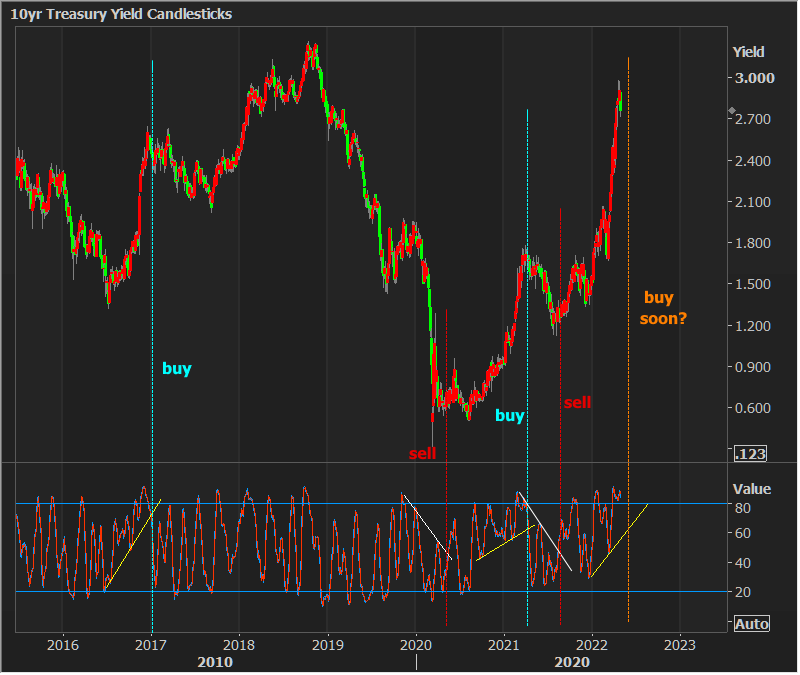 As for today, bonds are already on the back foot, giving up roughly unchanged levels from the overnight session and moving modestly into weaker territory.  MBS and Treasuries are both currently right in line with yesterday's weakest levels (from domestic hours).