Here at the end of April, bonds are seeing a similar rally to the one seen at the end of March.  At least that's true in terms of the number of days of gains and the total amount of ground covered. 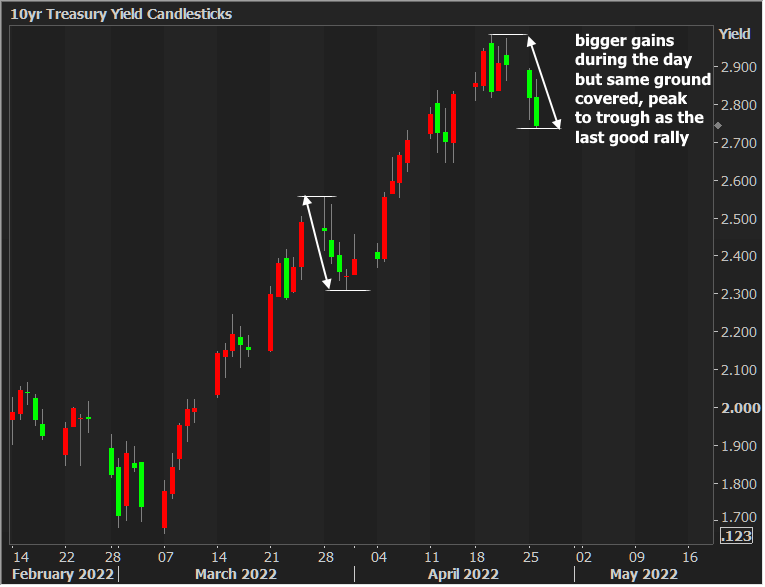 The March rally occurred mostly during domestic hours and was definitely affected by month-end trading/positioning.  The current rally is a bit early to be chalked up to month-end positioning, and has seen much smaller gains during domestic hours.   The following chart from the MBS Live dashboard only includes domestic trading hours.  Note the bigger domestic gains back at the end of March. 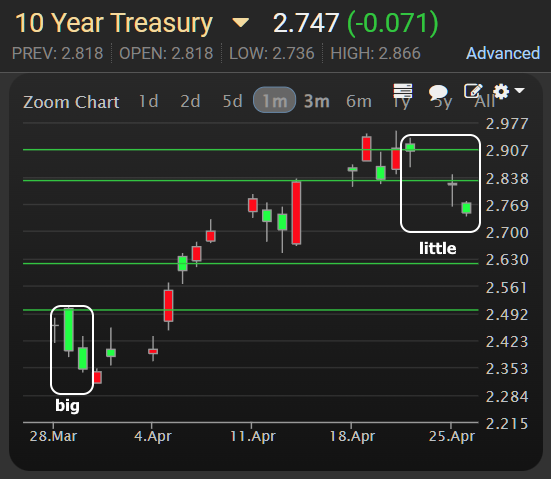 The takeaway is that global markets are doing more to drive this rally than US markets.  Notably, EU bond yields hit long term highs on Friday and have bounced fairly sharply--especially yesterday.  This accounts for most of the ground covered so far this week, but it doesn't tell the whole story as to WHY the ground has been covered.

To be sure, there is a technical aspect to the recent gains.  As we've continued to say/feel/observe, the higher rates go, the stronger the case becomes for support, even if nothing is changing in terms of fundamentals.  But if we had to pick one dominant theme so far this week, it would be the massive day of selling in Chinese equities yesterday followed by another moderate day of selling today.  Markets are pricing in a bit of a global growth slowdown and that's being compounded by Beijing's battle with covid (with Shanghai's precedent fresh in many traders' minds).