Recently, the bond market's job description seems to be almost entirely focused on reacting to CPI and then waiting for the next one.  Perhaps we can throw the Fed into the mix as well, but Fed days have been a distant second fiddle to CPI.  So with CPI out just a day ago, what do we do until the next one comes out?  What does the bond market do?  These are surprisingly fair questions in early 2023, and we won't be entirely sure of the answer until we see what actually happens.

We know that markets were more than willing to react to other data besides CPI recently.  This was especially true of last week's various labor market reports on Thursday and Friday.  Those actually made for bigger moves than yesterday's CPI, but possibly because Thursday accounted for a quick break outside the prevailing consolidation pattern in Fed rate hike expectations and Friday quickly restored the range.  Either way, it's notable that this week's CPI data merely left that range intact as opposed to challenging it (notable, but perhaps not surprising considering CPI was in line with expectations). 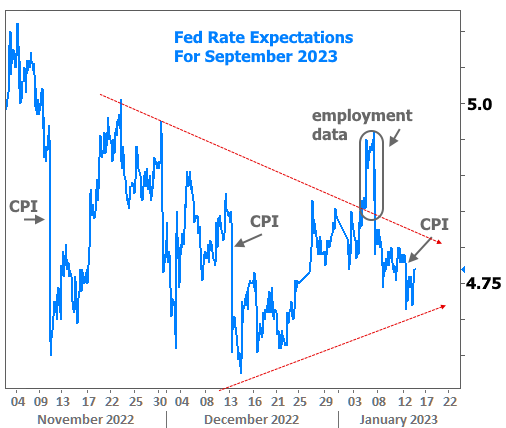 That consolidation pattern suggests the Fed Funds Rate is homing in on 4.875% (technically 4.75-5.00 target range) as the "terminal rate" (aka ceiling).  That would make the path of this rate hike cycle look like this, assuming the Fed can fulfill its goal of holding rates at the ceiling for a long time. 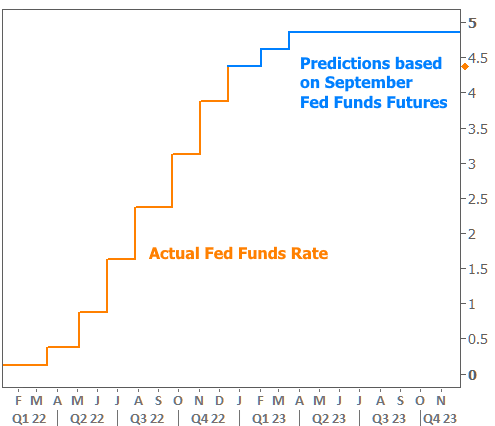 While the Fed Funds Rate moves in a wider range than 10yr Treasury yields, the 10yr tends to move first--sometimes by many months.  In late 2018 through the middle of 2019, 10yr yields were falling as the Fed Funds Rate held steady. 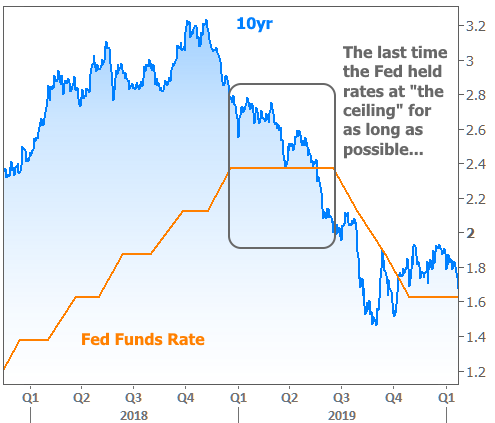 Another takeaway from the chart above is that 10yr yields began to decline even as the Fed undertook the last leg of its rate hike cycle.  In other words, the longer view was that, although the Fed would continue to hike just a bit more in the short term, rates would end up being lower, on average, over the next 10 years.  That's not too different from what many investors are thinking right now, with the downtrend in rates since November looking a lot like the initial drop from ceiling levels in late 2018.

In the short term, the challenge for further progress would be to break below a level of 3.40%.  While this isn't some magical gateway that guarantees additional downward momentum in rates, it would be a somewhat important milestone that confirms traders are comfortable with tentatively beginning the journey toward lower long term rates. 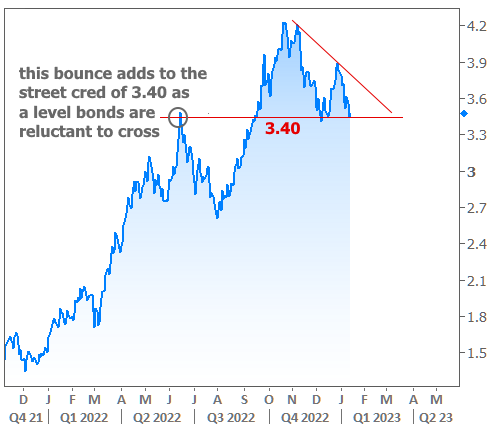 Whether that journey begins or not, it will still depend on incoming economic data.  As long as the labor market situation remains strong and unless prices in the services sector unexpectedly deflate, the Fed won't be seen as having any major motivation to be friendlier toward rates.  That could ultimately change the traditional dynamic between longer and shorter term rates in the next few months.