Due to the "anything can happen" nature of financial markets AND the fact that traders can trade what we can predict, I rarely take an unequivocal stand when it comes to the immediate future.  Yesterday was about as close as I get, apart from those rare instances when I think I see the writing on the wall before the market has fully appreciated what's going on (The run up to the taper tantrum in May/June 2013 was the last obvious instance of that).

Why was I feeling defensive?  Check out yesterday's recap for the details, but between the 5-day rally running the risk of getting tired, the technical resistance at .63%, the artificial extension of the rally thanks to huge stock selling, and the upcoming 3-day weekend, it made significantly more sense to err on the side of caution.

Sometimes a plan comes together.  Bonds are selling off somewhat sharply this morning.  It's hard to say exactly how much of that is due to some strong internal component of the jobs report or simply the laundry list of other justifications in the previous paragraph.  Either way, it's what we were on the lookout for.

How long will this weakness run?  If it gets big enough today, then today may be it!  Buyers are looking to buy at the right levels, and I'd be surprised if they let 10yr yields get much above .695 without opening their pocketbooks.  Push that up to .73, the next technical level, and the friendly rebound would probably be intense.  Bottom line, it's not really a question of how long it lasts as much as how high yields go.  Last week's Fed scare helped define the upper boundary of the range for now, and it would take some major, new development in epidemiology or politics for that to change before the Fed announcement in just under 2 weeks. 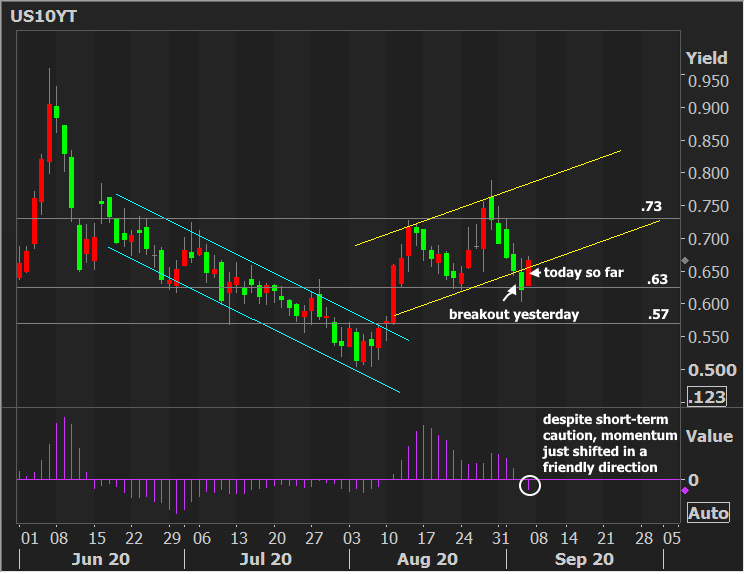 One note on today's chart.  The MACD forest at the bottom finally confirmed a positive momentum shift.  These shifts CAN be as awesome as the one seen on June 15th (not highlighted on the chart, but you can see where the bars dip below the horizontal line).  Although it's not shown on the chart, we had a similar dip back in early April.  It only lasted 2 days before reversing course.  Yields went on to rise all the way through early June.  Technical analysis: no crystal balls.