I talked yesterday about rates "reconnecting with the bond market," and that's an assertion that needs some more clarification on several levels.  By way of background, the original disconnection refers to rates remaining much higher than MBS or Treasuries suggested they should be in the wake of March's massive market volatility.  At the time, I said mortgages would only slowly return to a healthier spread versus bonds, and that the spread had likely sustained some semi-permanent damage due to covid-related mortgage market issues.

I make it a point to remind you that there are no gurus when it comes to predicting the future of rates.  I will continue to make that point as it relates to whether rates will be higher or lower at any point in the future.  After all, that's what really matters, right?  But when it comes to certain binary choices or the probable relationships between two variables, I definitely think we can do better than mere random guesses.

For instance, I couldn't tell you that rates would be higher or lower, but I could tell you with near certainty that they wouldn't be as low as the bond market said they could be for a long time.  I was also pretty confident that they'd reverse course after closing a majority of the gap.  That's exactly what happened, but then the LLPA news threw a wrench in the works by forcibly widening out the spread between mortgages and bonds again.

The chart that follows is potentially confusing, but bear with me and we'll get through it!  The ORANGE line (orange-ish, anyway) is UMBS 2.0 prices, but they're upside down.  This allows us to see correlation with rates. The red box is set such that the far left side is the day of the LLPA news.  It's tough to see depending on your screen size, but important to note that MOST of last week's bond weakness movement (again, that's downward movement in prices even though the orange line is moving higher in the chart) occurred BEFORE that news. 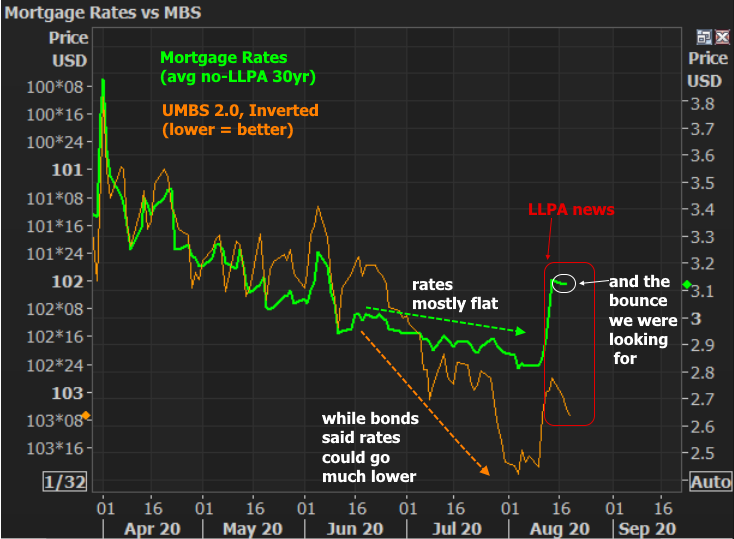 Now consider the green line, where most of the upward movement occurred AFTER the LLPA news.  Thursday was especially brutal.  MBS were pretty darn close to unchanged on the day, yet mortgage rates jumped by another .16% on average.  Friday's closing levels were basically unchanged as well yet rates continued higher.

Bottom line, lenders were clearly pricing in some justifiable gloominess.  We were hoping to see some level of reconnection, but weren't sure when it would show up.  As of the past 2 days, we're finally seeing rates calm down with respect to their blowout versus bond markets.  Please note, this does NOT mean that rates are back down to levels suggested by the bond market (obviously, based on the green line not being as low as the orange line).

In that sense, "reconnection" was a confusing term.  If there was a word like "re-correlation" that would have been better.  In other words, rates were finally willing to improve on days where bonds improved.  We'll work on the magnitude of that correlation by and by, but definitely don't expect it to be 1:1 any time soon.