There is a ton of uncertainty about rates and the economy in the bigger picture.  That uncertainty jives with a broad sideways trend in an all-time low range.  But be aware, if we're truly talking about the big picture and broad ranges, most professional bond market pros have a much wider range in mind than the average mortgage market pro.  In terms of 10yr yields, the range of 0.5 to 0.8 jumps right off the page--perhaps with some overrun to 0.95 as long as it's as temporary as it was in early June.

If market participants are resigned to such as sideways range in the bigger picture, we are resigned to following trends that emerge INSIDE that range.  While that's not as much of a high stakes game as taper tantrums or trade wars (or the initial onset of the covid rally, for that matter), it's the highest stakes game we have right now, and as of yesterday, it just got interesting (even if not in a "fun" way).

It got interesting due to a very VERY clear break of a very well-defined trend.  This breakout was an imminent risk last Friday, as discussed in the commentary here and as seen on the following chart.  I put a new (old) technical overlay today.  We have used the MACD Forest (the lower part of the chart below) many times in the past and it's probably slightly better than the more mainstream momentum overlays (like RSI and stochastics), although slightly harder to explain.  To oversimplify a bit, when the bars cross the middle/flat line, that's generally as clear of a momentum shift signal as MACD will offer.  Or rather, that's the safest way to use the overlay under certain conditions. 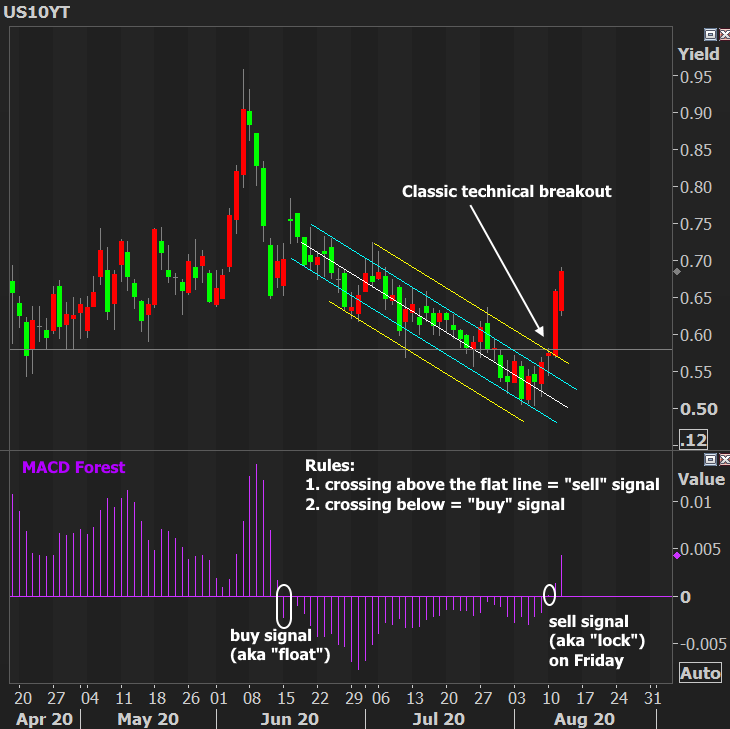 What conditions are those?  There are only 2 that I would suggest:

1. Understand that the middle line can be crossed in one direction only to be crossed again in the other direction a few days later.

2. The longer we go without the line being crossed, the better the odds that a breakout is sustained.

In other words the chart above speaks to rule 2.  The time spent above the line in April/May and early June was the longest such period that I can find looking back more than a decade (the average length of time is about a month, but there is a wide distribution of results).  All that to say that Friday's microscopic breakout (hard to see, but it's there--the value is +.000076) was a clear "sell" signal from a trading standpoint.  And "sell" to traders means "lock" to the mortgage world.

Keep in mind, it's very easy to say that with the benefit of hindsight, but that's why rule 1 is rule 1.  There are plenty of examples of "lock" signals that give way to "float" signals in very short order.  That could happen this time around too, although there's no doubt that Friday would have been a great day to lock.

The bigger question is where we go from here?  Is this the start of a big bad trend toward higher rates or just a temporary correction?  There are a lot of smart people I talk to that are pretty calm about this move.  Granted, they're bond market types who are keeping a wider range in mind in the bigger picture, but they generally agree that bonds were overbought and that this week is a good enough candidate for a technical correction/consolidation.  They feel that selling pressure will top out some time today or tomorrow and bonds will catch their breath.  Whether or not you can afford to bank on that sentiment from a lock/float stance is really up to you.  NO ONE can tell you if my bond market buddies are right.  And if you ever think you see evidence to the contrary, you're actually just seeing a lucky guess.

I will go out on more of a limb than normal however and at least offer you my opinion.  It's a little vague, and it won't provide one right answer for everyone, but it may help you refine your own decision.  Simply put, I saw a very strong case to shift toward a more lock-biased stance last week.  While I would still be erring on the side of caution this week, that was more true yesterday than today--especially BEFORE the reprices.

Given the current state of play this morning, if bonds are rallying after today's 10yr auction, my level of lock/float defensiveness would be significantly lower than it has been in the past week.  Whether or not that would be low enough to avoid locking would really depend on the particulars of my situation and my personal level of risk tolerance.  Either way, we at least have a better fighting chance today than we did yesterday morning.