The Case-Shiller National Index, which covers all nine U.S. census divisions, rose 9.2 percent year-over-year in October, compared to a 10.7 percent increase the previous month. The 10-City Composite annual increase came in at 8.0 percent, 1.6 percentage points lower than in October, while the 20-City Composite’s gain was 8.6 percent, down from 10.4 percent. All 20 cities reported lower price increases in the year ending in October versus the year that ended in September.

Some cities still show exceptional annual growth. Miami led the way with a 21 percent year-over-year price increase, followed by Tampa with a 20.5 percent increase, and Charlotte in third place at 15 percent. The two weakest performers were San Francisco (up only 0.6 percent year-over-year) and Seattle (+4.5 percent). Both cities peaked in May 2022, and both have declined by more than 10 percent since then.

CoreLogic Deputy Chief Economist Selma Hepp said of the results, “Home price growth continued its rapid slowdown, dropping sales volume as much as 40 percent year over year this fall. These trends will likely continue into 2023, with prices expected to decline annually by the second quarter. Even with general housing market volatility, 2022’s home price growth will be the second highest after 2021.” 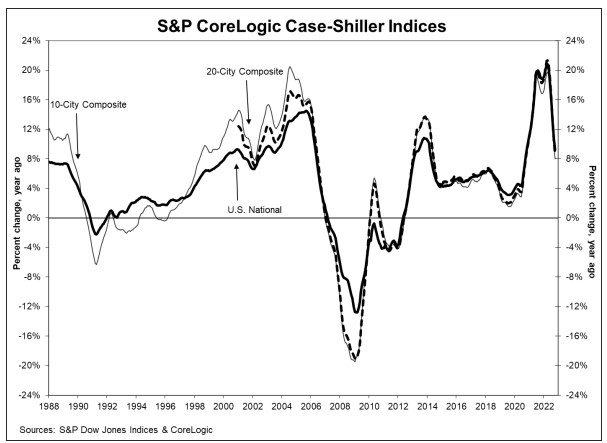 Craig J. Lazzara, Managing Director of the Dow Jones Indices said October marked the fourth consecutive month of declining home prices in the U.S. He noted the National Index is now down 3 points from the market’s June peak and the 10- and 20-City Composites are both down 4.6 percent. “These declines, of course, came after very strong price increases in late 2021 and the first half of 2022.  Despite its recent weakness, on a year-over-year basis, the National Composite gained 9.2 percent, which is in the top quintile of historical performance levels.

“Despite considerable regional differences,” he continued, “all 20 cities in our October report reflect these trends of short-term decline and medium-term deceleration.  Prices declined in every city in October, with a median change of -0.9 percent. Year-over-year price gains in all 20 cities were lower in October than they had been in September; the median year-over-year increase across the 20 cities was 8.3 percent.

“As the Federal Reserve continues to move interest rates higher, mortgage financing continues to be a headwind for home prices. Given the continuing prospects for a challenging macroeconomic environment, prices may well continue to weaken.”

Hepp concurred, saying, “2023 will likely pose additional market challenges as for-sale inventory continues to shrink and both homebuyers and sellers pause because of affordability constraints, fear of falling prices and an unwillingness to surrender locked-in low mortgage rates. But, if mortgage rates continue to fall, renewed optimism could reinvigorate the housing market in 2023.”

The S&P CoreLogic Case-Shiller Home Price Indices are constructed to accurately track the price of typical single-family home pairs for thousands of individual houses from the available universe of arms-length sales data. The indices have a base value of 100 in January 2000. The October reading for the National Index was 298.99. The 10-City Composite was at 315.13 and the 20-City Composite reading was 303.86.

The FHFA index shows a similar pattern. It was unchanged from September, a month that had managed a 0.1 percent increase. On an annual basis, prices rose 9.8 percent. 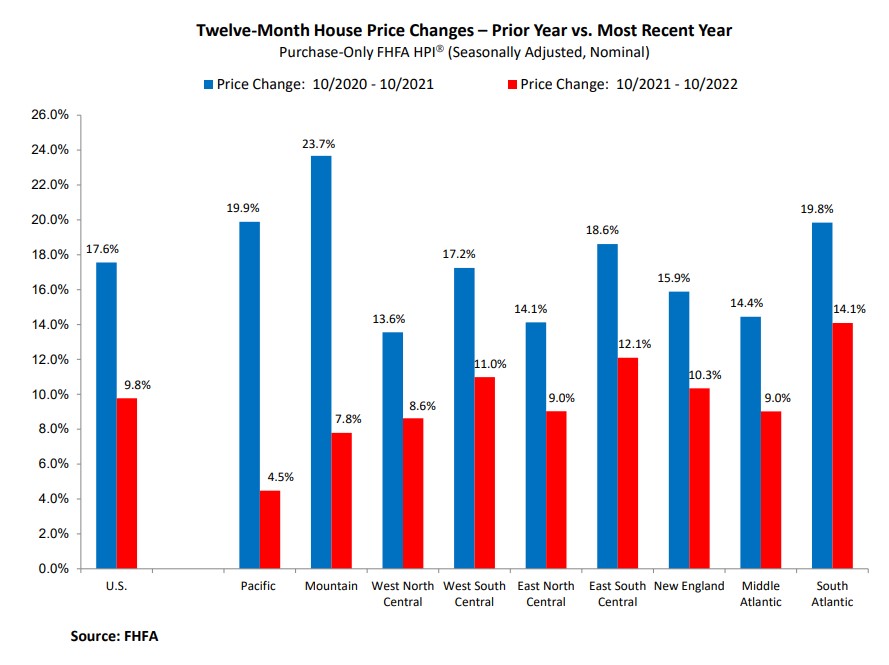 The FHFA HPI is derived from home purchase prices financed by the government-sponsored enterprises Fannie Mae and Freddie Mac. The HPI was indexed at 100 in January 1991. In October 2022 it was at 392.7.