The two headline components of the index – consumers’ attitudes toward buying and selling a home – each increased slightly from their October levels but remained down by double digits from the same month in 2021. When asked if it was a good or a bad time to buy a home, positive answers increased by one point, but the net positive, (good time minus bad time answers) was a negative 63 percent, 28 points lower on an annual basis.

The same pattern prevailed with attitudes toward selling. Good time answers rose from 51 percent to 54 percent while bad time answers declined by 3 points to 39 percent, resulting in a net positive increase of 6 points to 15 percent. This is still 38 percentage points lower than the net positive a year ago.

“Both consumer homebuying and home-selling sentiment are significantly lower than they were last year, which, in our view, is unsurprising considering mortgage rates have more than doubled and home prices remain elevated,” said Doug Duncan, Fannie Mae Senior Vice President and Chief Economist. “Following eight months of consecutive declines, the HPSI did tick up slightly in November but is essentially unchanged since hitting its all-time low last month. Consumers continue to expect mortgage rates to rise but home prices to decline, a situation that we believe will contribute to a further slowing of home sales in the coming months, as both homebuyers and home-sellers have reason for apprehension. We expect mortgage demand to continue to be curtailed by affordability constraints, while homeowners with significantly lower-than-current mortgage rates may be discouraged from listing their property and potentially taking on a new, much higher mortgage rate.”

Elevated mortgage rates continue to constrain affordability, and 62 percent of respondents expect mortgage rates to rise even further over the next year, compared to only 10 percent who expect rates to decline. The net of -53 percent is up 7 points from October and 1 point on an annual basis. 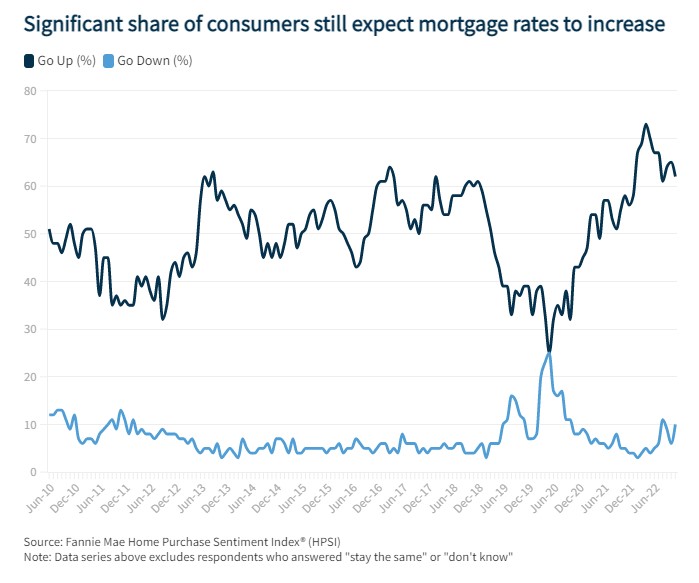 The percentage of survey respondents who expect home prices to rise over the next year was unchanged at 30 percent while expectations about a price decline fell from 37 percent to 34 percent and there was a decrease of 4 points among those who anticipate no change. The net share of those who say home prices will go up increased 3 percentage points for the month but was 28 points lower compared to the prior November.

Respondents expressed growing worry about their job security, the percentage who said they were not concerned about losing their job over the next 12 months decreased from 85 percent to 78.

There was no net change in the percentage of respondents reporting a significant increase in household income over the last 12 months. That figure remained at 10 percent.