Does this mean no one can get a mortgage for more than $726,200?  No.  The conforming loan limit is the maximum amount that can be guaranteed by Fannie Mae and Freddie Mac (the government-sponsored enterprises or GSEs).  That guarantee has advantages in terms of the loan approval process and interest rates.  There are plenty of mortgage options for higher amounts or that are not guaranteed by the GSEs, but conforming loans account for a vast majority of new mortgages.

$726,200 is the base amount.  Higher cost areas have access to higher limits based on the average home prices in that area.  The county by county limits are listed separately, HERE. The highest tier is $1,089,300 (base loan limit x 1.5).

Where do these numbers come from?

The Federal Housing Finance Agency (FHFA) is the regulator of the GSEs.  It publishes various home price data.  Once the data is in for the 3rd quarter (typically by late November), it is compared to the 3rd quarter of the previous year and home prices are adjusted by the corresponding amount.

In situations where home prices fall, the limit does not fall, but it will not rise again until home prices move back above the levels associated with the previous limit.  For instance, let's imagine the loan limit was $700k, but prices fell enough to drop it to $600k.  The limit would remain at $700k year after year (even if prices were rising) until prices got back above $700k.

All that having been said, we're clearly not dealing with falling home prices in year-over-year terms right now.  The month's of July and August did show slight declines in monthly terms for the FHFA price index, but September bounced back.  The Case-Shiller price index, which is typically very similar to FHFA when it comes to monthly movement, continued to decline in September. 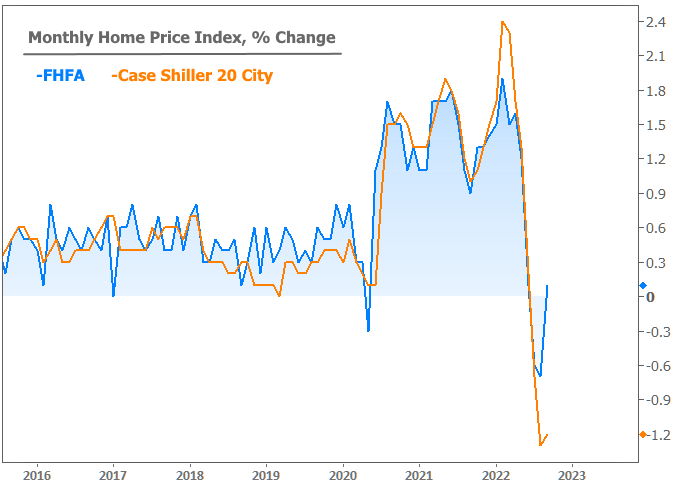 In annual terms, both are still well into positive territory. 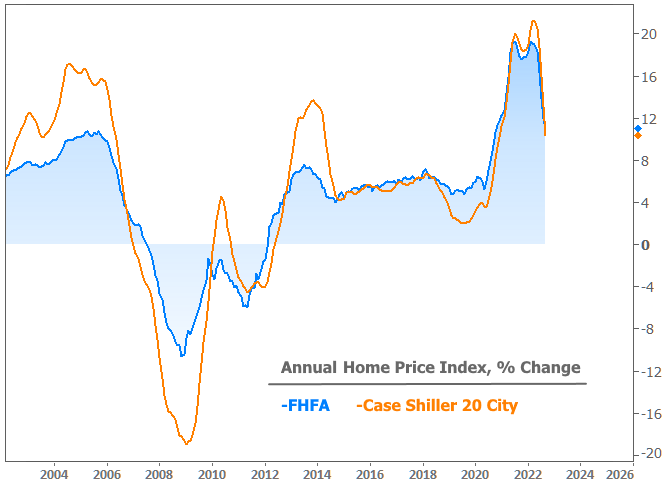 The blue line in the charts above is from FHFA's monthly home price index.  The conforming loan limit is based on an expanded quarterly index which varies slightly.  Interestingly enough, the monthly data showed a decline of 1.2% during Q3 whereas the quarterly data showed an increase of 0.2%.  NOTE: that's an increase from the end of Q2 to the end of Q3.  If we're looking at Q3 2022 vs Q3 2021, the gain is 12.2% (which is why the new loan limit is 12.2% higher for 2023).

The final index value for Q3's quarterly data was 369.50 versus last year's Q3 value of 329.3.  The loan limit increase the the percent change between the two of those numbers.

The limit goes into effect for loans acquired by the GSEs in 2023.  That typically means lenders can apply the limits immediately since it takes at least a month for a new loan to be 'delivered' to the GSEs.  Lenders tend to adopt the new limits at slightly different paces.  Frontrunners will likely announce them today.  Laggards may take a few weeks.

How about FHA loan limits?  These have yet to be announced.  Last year it happened on the same day as FHFA.  In any event, the calculation is known.  FHA will be 65% of the FHFA Conforming Loan Limit or $472,030.