Today brought the release of the two biggest home price indices (HPIs) for the month of July from S&P Case-Shiller and FHFA.  Both HPIs showed a marked deceleration in home price appreciation in June with Case Shiller up only 0.2% and FHFA up 0.1%.  Both moved into negative territory in July with Case Shiller down 0.4% and FHFA down 0.6%.

The notion of falling home prices is potentially troubling to those who lived though the Great Financial Crisis (GFC) in 2008.  But while the present day price contraction has yet to fully play out, there are still significant differences from 2008.  In fact, even if the FHFA price index (the broader of the two) dropped by roughly 20% as it did by the end of 2008, it would merely take year-over-year numbers back to flat. 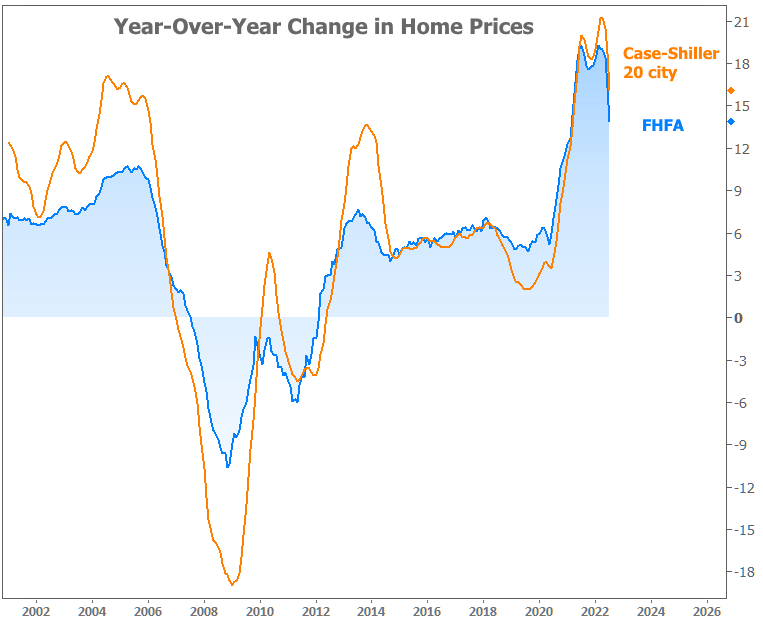 While "flat" year-over-year home price appreciation doesn't sound so bad (and probably wouldn't be so bad in the big picture), getting there from here wouldn't be fun in terms of home equity dollars.  In 2008, a 20% decline was around 50k for the average home.  Now it would be 80k.  Someone who bought a 500k home near the peak could own a 400k home if a 20% correction plays out.

But that is far from a certainty at this point--especially with persistent inventory issues becoming worse in the past 2 weeks as sellers balk at the idea of leaving their existing mortgage rate for something more than twice as high.  All this in addition to the fact that mortgage/housing markets have been operating in an infinitely more sustainable way than in the years leading up to the GFC.  The biggest issue/problem was an external one (pandemic and the associated fallout on the housing supply chain) and its worst offense was causing prices to appreciate too quickly.

Seeing that the 2023 limit would already be up to $724,650 without even adding any appreciation after June, several mortgage lenders preemptively began offering $715k limits when they began seeing early signs that prices wouldn't contract much in Q3.

That's still higher than $715k, but in order for 2023's loan limit to be at or above $715k at this point, the pace of home price declines could not increase in the next two reports.

If all this loan limit pontification sounds like much ado about nothing, it really is.  The lenders offering 715k will survive even if the limit ends up being slightly lower.  There's no implication for borrowers locking loans with those lenders.  The only real fallout would be for the small minority of borrowers who needed a couple thousand extra dollars of loan balance for some reason.

The more relevant concerns go back to the bigger picture for home equity.  A couple months of 0.6% declines in prices would be no big deal.  If that pace accelerates and lasts long enough, it would be a different story, even if not the same sort of story seen in 2008.