Last Week: "Housing Recession." This Week: "At Or Close To The Bottom"

Less than a week later, today's Pending Home Sales release contains quite a different remark: "in terms of the current housing cycle, we may be at or close to the bottom in contract signings."

How can these two comments coexist in such close proximity?  At first glance, it might seem incongruent, but here's the reality: the housing market is absolutely in a recession in the sense that sales have been receding/declining in a meaningful way for more than 6 months.  Pending Sales peaked last October and Existing Sales peaked in January.  If we want to use "bear market" metrics of 20% contractions, both easily meet the requirement.

In other words, the "recession" comment is no great mystery and not a matter of debate.  So it's really the "at or close to the bottom" comment that deserves scrutiny.  On that note, there's no way to know if it's premature or not.  Certainly, if econ data remains strong, inflation remains intractable, and the Fed extremely restrictive in terms of monetary policy, rates are far more likely to revisit June's highs than July's lows.  That could definitely dampen hope that housing has bottomed, but again, it depends on data that has yet to be revealed.

What we know at the moment is that Pending Sales only declined a modest 1.0 percent in July--a major improvement from June's 8.9% drop and well above the median forecast of -4.0%.  It's not unfair to surmise that homebuying demand is waiting in the wings, ready to improve if affordability (via rates and/or home prices) does the same.

The "bottoming" narrative also has some support from the sheer size of the decline seen so far.  It's not quite as big as the housing meltdown that preceded the GFC (great financial crisis), but it's far bigger than any other response to rapid rate spikes AND it takes the index to the lowest levels since the GFC (lockdown months notwithstanding).  Note, the previous sentence assumes the GFC decline lasted until 2010 despite being artificially punctuated by 2 rounds of homebuyer tax credits. 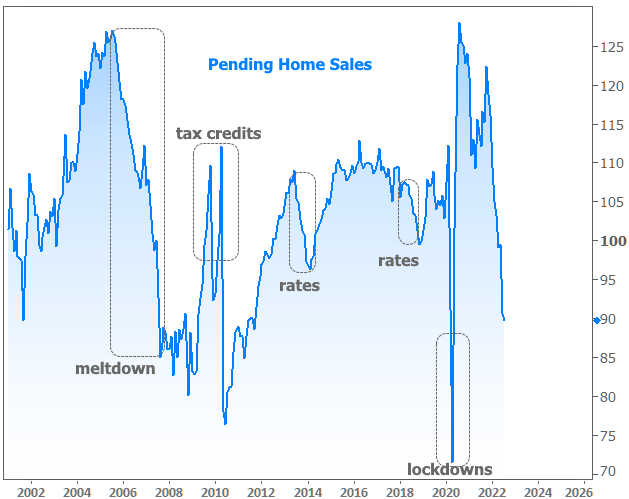 Bottom line: the faster and bigger the decline in anything, the closer it is to a bottom. It remains to be seen how close we truly are.  We could indeed be close, but we also need to be cognizant of the fact that July was a much more hopeful month in the mortgage market than August is turning out to be.