The National Association of Realtors (NAR) reported that June saw the 5th consecutive monthly decline in Existing Home Sales today.  The annual pace of sales came in at 5.12 million, well short of the consensus (5.38m) and 5.4% lower than May's 5.41m reading.

In the grand scheme of things, sales were already back in line with pre-pandemic levels over the last 2 months.  Today's release leaves them near the lower end of the range seen from 2015-2019, but sharply lower from the post-covid peaks around 6.5m.

One major gripe about home sales (and one major explanation for an epic surge in home values) over the past two years is the broad notion of "inventory."  In other words, there weren't enough homes on the market to match the level of demand. 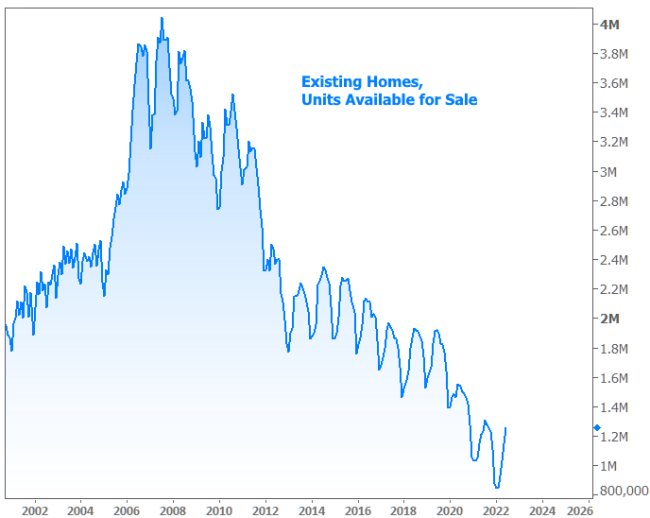 Even now, inventory levels remain historically low.  That was a problem that was only getting worst until the first part of 2021 when rates began to move noticeably higher from all-time lows.  Since then, inventory was still shrinking in year over year terms, but by smaller and smaller amounts.  Today's report is significant because it's the first time since mid 2019 that inventory has increased year-over-year.

The following charts from Redfin's market data center show other ways to visualize the same phenomenon.  The first is the outright level of active listings in markets it covers.  Notice the black line (2022) overtaking the orange line (2021), but still very low compared to the 2019 and 2020 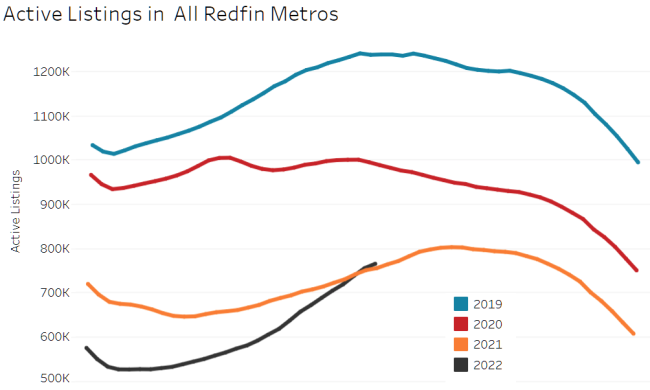 Inventory is typically increasing at this time of year, but the next chart shows that it's increasing at a far faster pace than it has over the past 2 years.  It's also been accelerating whereas year-over-year inventory gains were cooling off in 2019. 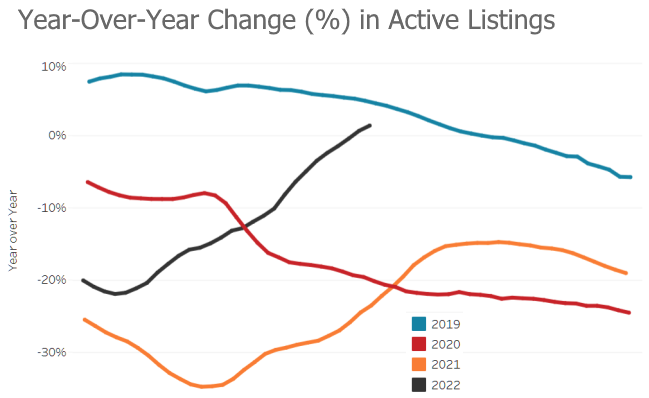 Inventory improvements can be thought of as both a cause and effect.  Home sales were given reasons to cool off by 2 straight years of 20% appreciation combined with one of the sharpest rate spikes in history.  Fewer sales = more inventory left on the shelf.  In that sense, they're an effect .

Higher inventory also acts as a root cause--one of several--when it comes to prices.  The median price of existing homes was only up 13.4% year-over-year--a far cry from the 19-21% gains seen in home price indices or the 25% increase at the peak in May 2021.

13.4% is still a scorching pace, historically, but if present trends continue and if forecasts hold, it should continue to move back toward 0%.  Whether or not price gains move below 0% (i.e. true price declines) is a matter of great debate, and not easily predicted based on unique aspects of the post-covid economy and supply chain. 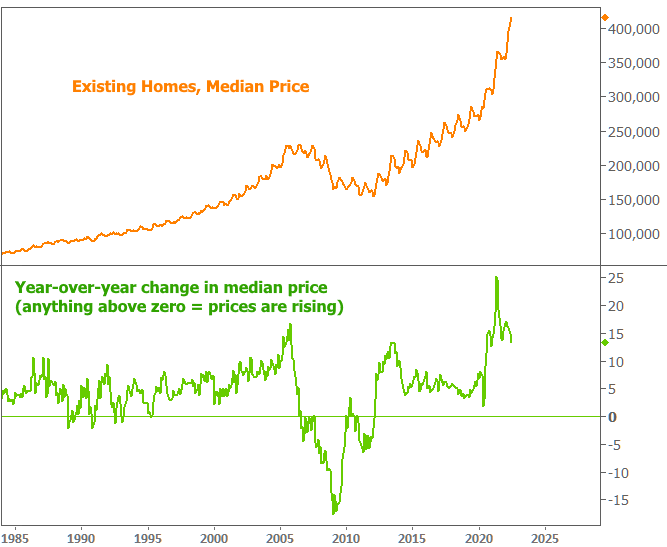 One of the easiest places to observe the unique post-covid reality of the housing market is in the number of days that properties remained on the market in June.  The day count dropped to a record low of 14 from last month's 16.

"Finally, there are more homes on the market," said NAR Chief Economist Lawrence Yun. "Interestingly though, the record-low pace of days on market implies a fuzzier picture on home prices. Homes priced right are selling very quickly, but homes priced too high are deterring prospective buyers."