Consumers Think It's a Terrible Time To Buy, But They're Also Fairly Terrible Housing Forecasters

Fannie Mae conducts a monthly survey on homebuying sentiment, officially known as the Home Purchase Sentiment Index (HPSI).  It tracks buyer/seller attitudes on whether its a good time to buy/sell in addition to price/rate expectations.  Given the ongoing surge in prices and the recent surge in rates, the latest results hold few surprises.

One thing to understand about the HPSI is that it benefits from components that don't necessarily have a positive impact on the housing market--at least not directly.  For instance, price trends, employment, and income all factor into the headline number.  These components are the only things preventing the HSPI from sending its purest message, but when we look at the "good time to buy" component, the message is clear: 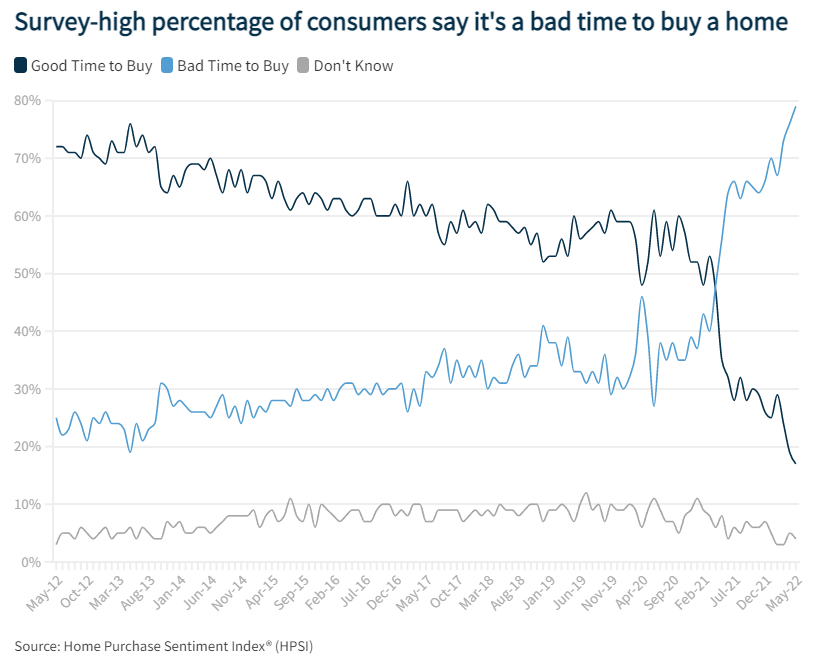 Fannie only started collecting this data in 2010, so there's no telling if the depths of the housing crisis would have seen a more severe imbalance between those who think it's a good time to buy vs sell.  That doesn't much matter though.  What matters is that homebuying sentiment is in the toilet--a funny thing to consider for buyers in some geographies where inventory constraints are still leading to multiple offers over asking price.

If only homeowners would listen to their own advice and list their homes!  After all, 76% of them say it's a good time to sell!

And now for a few of the dirty little secrets of consumer sentiment surveys...  Economists and traders often use these surveys as contrarian indicators based on the belief that by the time the masses figure out a broad economic trend, it's time for the actual market/economy to move on to the next trend.  To be clear, this is not an assertion made in Fannie's data--simply my own color commentary.  It's necessary, in my opinion, to preface the following two components.

First off, a near record high number of of respondents continue to say rates are more likely to go up in the next 12 months.  There's nothing too terribly wrong with that, but it's important to note that all these consumers are really doing is observing what has happened with rates in the recent weeks/months.

In other words, it's more a reflection of how rates have been moving as opposed to a thoughtful analysis of how they might move in the future.  Otherwise, we'd see a lot more balance here as financial markets are increasingly getting into a more neutral stance that allows for economic data and Fed policy shifts to push rates higher or lower over the next 12 months.  Either way, based on the jump seen so far in 2022, it's less and less likely that the market could sustain another meaningful surge in rates.

Incidentally, this chart has a strong bias which is easily seen throughout the middle of 2020.  In a nutshell, consumers are always skewed toward the belief that rates will go higher.  A strong trend toward lower rates leads to the assumption that "it can't get much better," and a strong trend toward higher rates doesn't seem to have the opposite effect (i.e. "it can't get much worse").  To be fair, perhaps we're seeing some of the latter in the latest bounce in the dotted red line above as it moved down from 73% to 70%.

The final piece of evidence in today's argument against reading too much into consumers' guesses about the future of rates/prices comes in the form of the average expected price change chart.  I'll let this one do the talking for itself.  Suffice it to say that the recent high guess of 3.8% annual price appreciation was just a bit lower than the ~20% increases that have consistently been coming in.