The brutal interest rate spike of 2022 has been all over the news for more than a month, but the strong pace of home sales (or purchase mortgage applications) has been a silver lining to that dark cloud.  In data released today by the National Association of Realtors (NAR), Existing Home Sales fell 2.7% in March to an annual pace of 5.77 million.

5.77 million is certainly well below the post-covid highs of 6.65 million, but notably higher than any pre-covid month going back to 2007.  In that sense, we can continue to entertain resilience in the purchase markets, but even NAR's chief economist Lawrence Yun expressed some concern, saying, "the housing market is starting to feel the impact of sharply rising mortgage rates and higher inflation taking a hit on purchasing power. Still, homes are selling rapidly, and home price gains remain in the double-digits."

This is a fair assessment as long as we assume the recent, moderate decline in existing sales is a reflection of rising rates.  Precedent isn't entirely unified on that correlation.  The following chart shows a few examples of rate spikes that had no discernible impact on sales.  The most notable among these was the spike in late 2016.  In fact, we might even question the spike in 2018 as it took a long time for sales to eventually trail off in the 2nd half of the year. 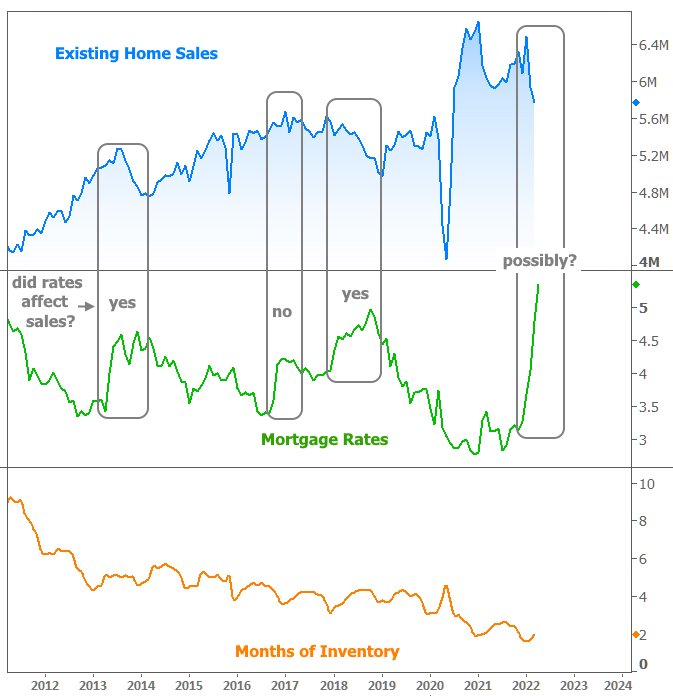 The same time lag between rates and sales is seen in 2013.  Rates began spiking in May, but sales continued higher through August.  Over time, there's enough inconsistency when trying to line up sales and rates that it makes sense to look elsewhere to round out explanations.  Yun essentially did that by mentioning inflation hitting purchasing power.  Prices of homes themselves are part of that equation.

The next chart shows the median price for existing homes as well as the year-over-year change.  It suggests some cooling impulses on sales from the pace of home price appreciation. 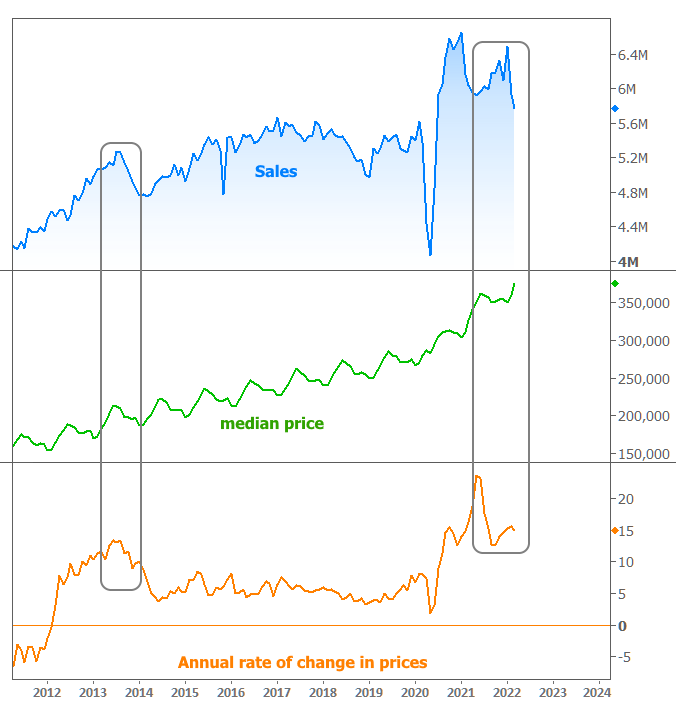 In other words, median prices hit another record high and have risen in year-over-year terms for a record number of months.  This was all made possible by the post-covid supply/demand environment.  There is plenty of uncertainty about the road ahead for sales and prices.  Experts agree prices will continue to decelerate, but the tight inventory situation makes it unlikely that prices are anywhere close to reversing course in year-over-year terms.

Other highlights from the Existing Sales data include: