Overall volumes of mortgage loan rate locks appear, as yet, largely unaffected by the recent increases in mortgage interest rates, but have definitely changed their composition. Black Knight says, in its current Originations Market Monitor, that total rate lock activity rose 19 percent from February to March, driven by 31 percent growth in those for purchasing. That brought the growth in those locks to 70 percent over the past three months. In the meantime, refinancing locks dropped 13.8 percent in March.

“Mortgage interest rates spiked in March, with 30-year offerings climbing 70 basis points over the course of the month,” said Scott Happ, president, Optimal Blue, a division of Black Knight. “In fact, our Optimal Blue Mortgage Market Indices daily interest rate tracker (OBMMI) showed the average 30-year conforming rate reach as high as 4.93 percent late in the month before pulling back slightly to close out March at 4.79 percent. And yet, despite seeing the fastest one-month rise in rates in nearly 13 years, we saw purchase lock volumes increase by 31 percent from February – likely as prospective buyers moved to lock in their loans before rates climbed any higher.”

While total refinancing fell, cash-out refinances, which are somewhat insulated by continued home value appreciation, increased by a modest 1.6, slightly offsetting the now six-month long slide in rate/term refis. They were down another 15.4 percent in March. for an 81percent year-over-year decline. The share of refinances in the pipeline was 28 percent, the lowest since November 2018. 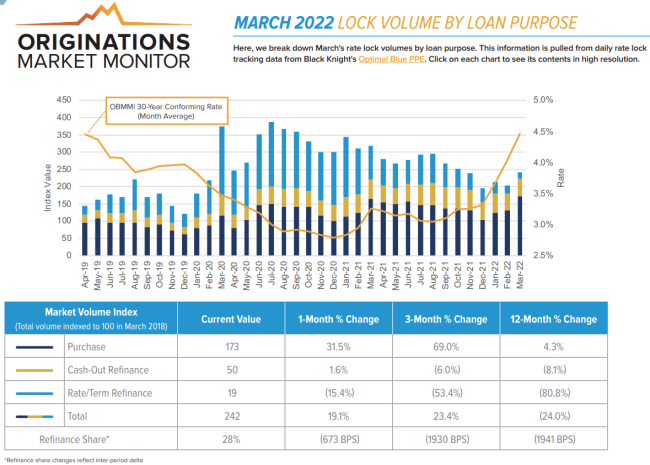 Another change in the composition was the size of the mortgages. Happ said, “As home prices continue to climb – even in the face of sharply rising interest rates – we’ve seen the average loan amount rise as well. The average loan rose by $8,000 to just under $362,000 in March, representing a more than 23 percent increase over February’s rise. In turn, non-conforming products – including both jumbos and loans with expanded guidelines – continued to take market share from conforming loans and accounted for a full 18 percent of the month’s lock activity. The FHA share of lock activity also rose on strong purchase lending demand.” 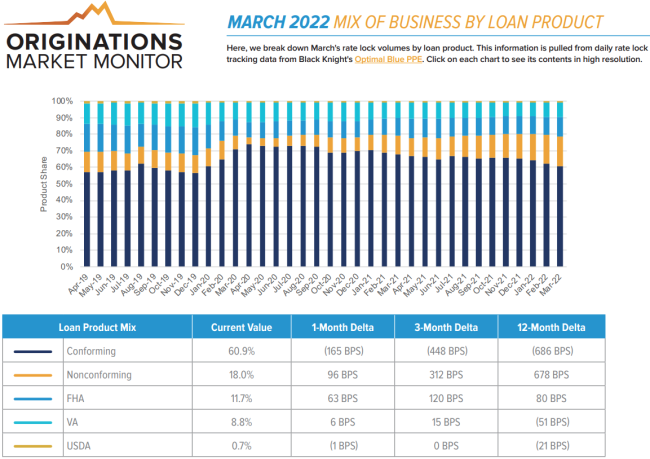 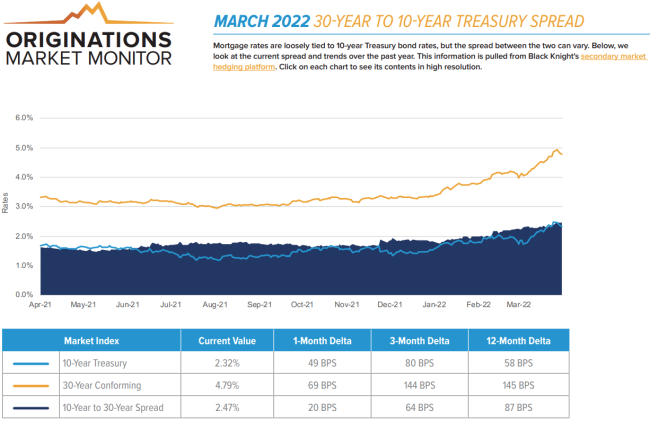 Credit scores for home purchase loans have risen slightly since the first of the year, but at 734, are unchanged from March 2021. However, scores for refinancing borrowers have fallen sharply in recent months. Cash-out borrowers had an average score of 713, down 5 points in March and 13 points since the first of the year. The score for rate/term refinancers has changed less radically, with declines of 1 and 6 points, respectively. Those borrowers have an average score of 729. 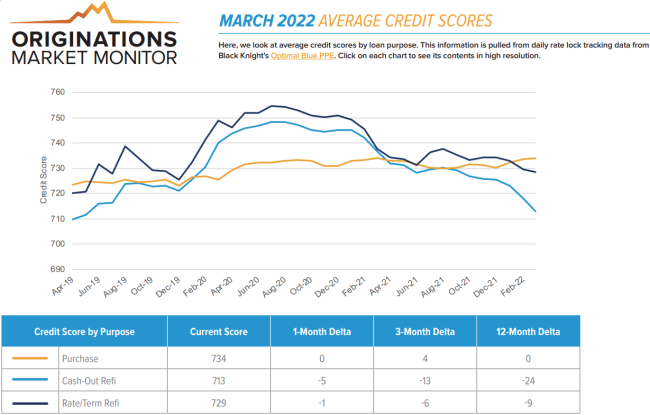 Pull-through rates – the share of locks that result in funded loans – fell on both purchase and refinance locks, with refi pull-through falling to just 65.7 percent. The pull-through rate for purchases was nearly13 percentage points higher. 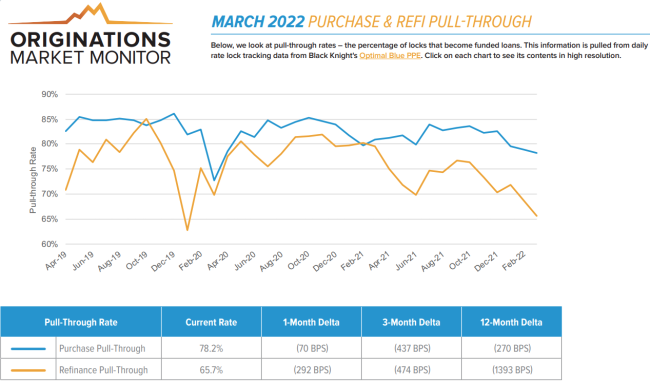