More than a half-million loans remained in forbearance at the end of February according to the Mortgage Bankers Association (MBA). Its monthly Loan Monitoring Survey, which coverers 73 percent of the 36.4 million loan first-mortgage servicing market, shows the preponderance of forborne loans are being serviced for bank portfolios or private label securities (PLS).

The 590,000 loans represent a 12-basis point decline from January, leaving 1.18 percent of all active mortgages in the program. The share of Fannie Mae and Freddie Mac (GSE) loans in forbearance decreased 8 basis points to 0.56 percent and those serviced for Ginnie Mae (FHA, VA, and USDA loans) fell 10 basis points to 1.50 percent. There was a 30-basis point decline in portfolio and PLS loans, but the forbearance share is still elevated at 2.72 percent. Of the remaining loans, 30.1 percent are in their initial plan stage, 57.0 percent are in an extension and the remaining 12.9 percent are reentries into the program.

Servicers also report that 94.94 percent of all loans serviced were current at the end of the reporting period. This was an increase from 94.91 percent in January. 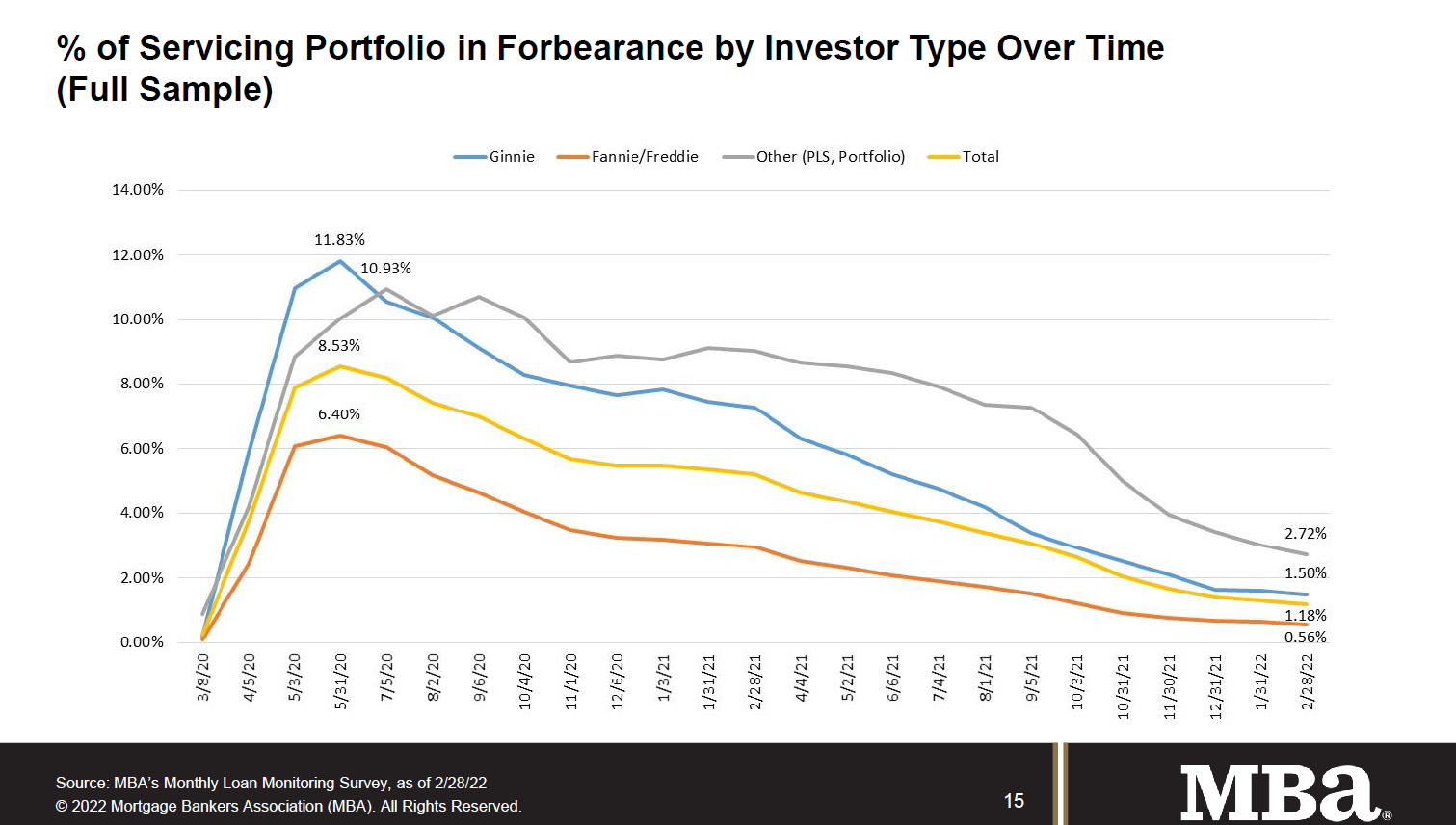 Walsh added, “We can credit several factors to the improved performance, including the availability of viable loss mitigation options, low unemployment that is now below 4.0 percent, strong wage growth, and rising home equity.”

The states with the highest percentage share of current loans were Idaho, Washington, Colorado, Utah, and Oregon. The lowest shares were in Louisiana, Mississippi, New York, Indiana, and Oklahoma.

Of all loans that exited forbearance plans between June 1, 2020, and February 28, 2022, 22.2 percent resulted in a loan deferral/partial claim, 11.5 percent of borrowers paid back past due amounts as they exited the program, and 15.2 percent left the program with a loan modification or a trial modification. Another 17.0 percent of borrowers did not make all of their payments but exited forbearance without a loss mitigation plan yet in place.

Nineteen percent of borrowers had continued to make their payments during the forbearance period and 6.8 percent paid off their loans either through a refinance or home sale. The remaining 1.2 percent resulted in repayment plans, short sales, deeds-in-lieu, or other reasons.

Of the completed workouts put in place from 2020 onward, 82.78 percent were current at the end of February compared to 82.26 percent the prior month.