For the second time this week a major report on loan performance has confirmed that homeowners are recovering rapidly from the pandemic. The National Delinquency Survey from the Mortgage Bankers Association (MBA) put the nationwide rate of non-current mortgage payments at 4.65 percent of outstanding loans at the end of the fourth quarter of 2021. This is down 23 basis points (bps) from the third quarter and 208 bps lower than a year earlier. The figure includes delinquent loans that are in forbearance programs.

“Mortgage delinquencies descended in the final three months of 2021, reaching levels at or below MBA’s survey averages dating back to 1979,” said Marina Walsh, MBA’s Vice President of Industry Analysis. “The fourth-quarter delinquency rate of 4.65 percent was 67 basis points lower than MBA’s survey average of 5.32 percent. Furthermore, the seriously delinquent rate, the percentage of loans that are 90 days or more past due or in the process of foreclosure, was 2.83 percent in the fourth quarter, close to the long-term average of 2.80 percent.”

Added Walsh, “The quarters right before the COVID-19 pandemic represented some of the lowest delinquencies ever recorded. Delinquencies are now approaching levels not seen since the first quarter of 2020, which is a testament to the strength of the U.S. labor market.” 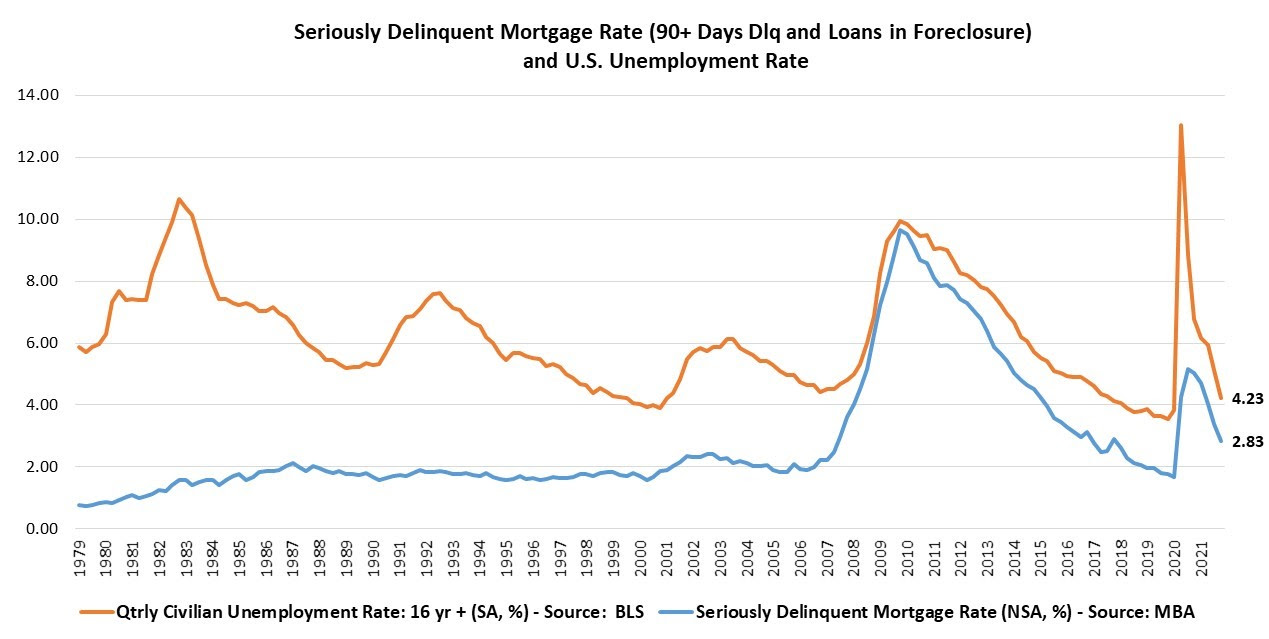 There were some increases in seasonally adjusted rates by stage compared to the prior quarter. The 30-day rate was up 14 bps to 1.65 percent and the 60-day rate rose 4 bps to 0.56 percent. However, a 41-bps improvement in seriously delinquent loans (90 or more days past due) to 2.44 percent overrode the other gains.

Delinquencies among conventional loans rose 3 bps quarter-over-quarter and 151 bps year-over-year while the rate for FHA loans fell 58 and 389 bps from the two earlier periods and VA rates declined by 57 and 205 bps. At the end of the fourth quarter the rate for conventional loans was 3.58 percent, FHA was 10.76 percent and VA 5.24 percent.

The delinquency rate includes loans that are at least one payment past due but does not include loans in the process of foreclosure. Those loans represented a 0.42 percent share, down 4 basis points from the third quarter of 2021 and 14 basis points lower than one year ago. This is the lowest foreclosure inventory rate since the third quarter of 1981. The percentage of loans on which foreclosure actions were started in the fourth quarter rose by 1 basis point to 0.04 percent, up from the survey low seen in third-quarter 2021 at 0.03 percent.