Fannie Mae’s Economic & Strategic Research (ESR) Group writes that it expects 2022 to be a year “of transition for both the economy and the housing market.” While it hedges its bet as to whether COVID-19 will end any time soon, it expects the market and policy choices driven by the pandemic to be gradually be replaced by more typical pre-COVID economic and housing patterns.

This won’t happen overnight, and the group says the changes may never be completely reversed. Alterations to work, school, and housing arrangements may prove to be long-lasting and even though inflation is expected to slow, it may remain higher than the pre-COVID range for the foreseeable future. That said, this month’s economic commentary from the ESR describes the year ahead as ‘returning to a 'new' normal.”

With unemployment below 4 percent and the Federal reserve expected to increase rates starting in March, the economy appears to be entering the mature stage of the business cycle, during which growth decelerates toward the long-run trend. Labor demand and the need to rebuild inventories should mean solid economic growth in 2022, but the period of rapid recovery has passed. The group expects improvement to supply chain difficulties, but risks around how fast this occurs, the duration of continued high inflation, and policy maker and financial market reactions to these economic conditions remain.

Recent economic forecasts from Fannie Mae have been notable for many revisions to economic and housing predictions, usually moving the metrics higher. January’s report, they say, contains only modest changes. GPA growth in 2021 is still expected to be 5.5 percent, the highest since 1984, but the growth this year has been lowered 0.1 point to 3.1 percent with 2023 still expected at 2.2 percent. Recent inflation data has likewise been in line with the prior forecast, so related adjustments have also been modest.

The impact of the Omicron variant will probably be less severe than earlier waves, provoking smaller economic effects and changes in consumer behavior and those are likely to be felt on the supply side because of the volume of cases and the number of workers calling in sick or needing to be quarantined. This could further delay supply chain improvements and put additional pressure on inflation.

When it comes to housing, the report says, “The past year's demand surge was driven by a combination of factors, low mortgage rates, down payments supported by stimulus checks and other savings, and a pandemic-driven reshuffling of preferences and move timing on the part of many households, all of which are expected to wane. Furthermore, the recent rapid house price appreciation and rising mortgage rates will lead to growing affordability constraints, dragging on home sales, but also likely limiting further price appreciation to a more sustainable pace.”

The economists don’t expect a soft year for home sales, existing sales will slow by only 3.2 percent this year, to the second fastest annual pace since 2006. But they do expect extremely limited inventories to produce “hypercompetitive bidding wars” in which potential homebuyers are priced out of the market. Rapid price growth will eclipse wage gains and waning stimulus checks and built-up savings, will make it increasingly difficult for many potential buyers. Mortgage-backed security issuance data continues to show the average back-end debt-to-income (DTI) ratios of borrowers increasing, indicating growing affordability pressures. There appears to be ample prospective homebuyers currently, but their volume will likely lessen as the year unfolds.

Changes to the sales forecast are minimal. Total home sales are expected to fall 1.2 percent, an improvement from last month’s -1.4 percent forecast. The 2023 slowdown has been revised from -3.8 percent to -3.6 percent.

Worsening affordability is still expected to dampen home price growth, but Fannie Mae expects prices growth to slow to 7.6 percent from the probable 17.3 percent in 2021. This is still considerably higher than the average pace of 5.4 from 2012 to 2019. Price growth will slow further to 3.3 percent in 2023. The current estimates are higher than the December forecasts of 7.4 and 2.9 percent. 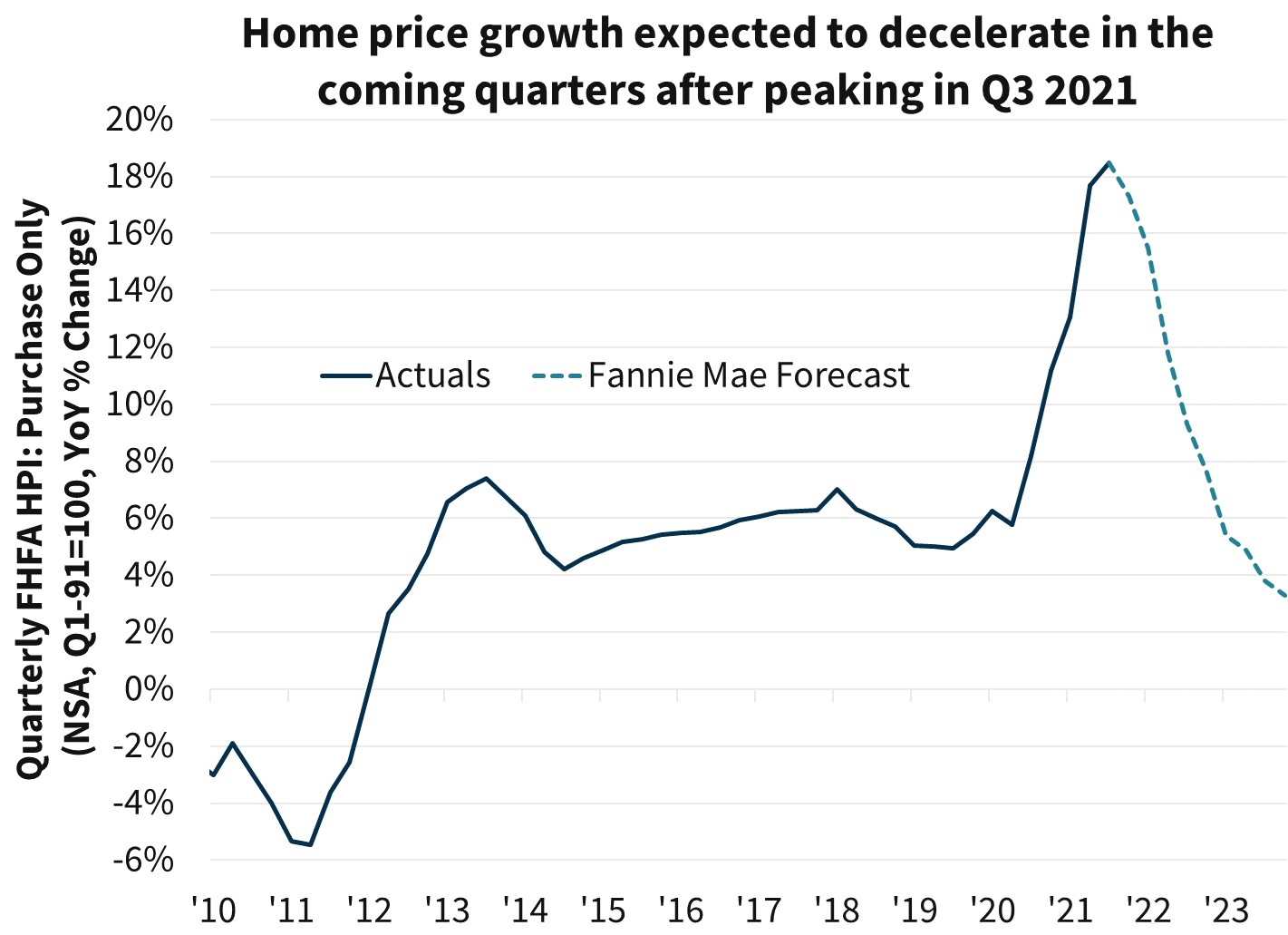 The economists see inventories improving, but slowly. The total number of homes under construction, including both single-family and multifamily units, is the highest since 1973 and homebuilders have acquired and are developing a promising number of lots. However, supply chain disruptions and ongoing labor scarcity issues are delaying many projects from being completed.

Homebuilders continue to report they are limiting sales orders because they can’t keep up with demand, while recent surveys continue to report heightened buyer foot traffic. While the Omicron COVID wave may extend the labor and supply disruptions, the ESR group anticipates an increase in home deliveries and new home sales later this year, helping to ease the overall tight housing market as both rental units and existing owned homes are vacated for these new units.

Fannie Mae continues to believe that much of the demand for housing over the past year was due to many buyers moving forward their plans to purchase a home, taking advantage of low interest rates and their ability to work from home. At first this was driven by higher-income renters who moved away from urban areas to buy. The patterns broadened over time to include a wave of early retirements which is now reflected in the lower labor force participation rate among older workers and likely accelerated many moving plans involving retirement locations. In some cases, pre-COVID migration patterns were simply accelerated. Successive waves of stimulus checks and increased savings also helped facilitate down payments, and over the past quarter, survey evidence published by Redfin suggests that many buyers have rushed to get ahead of rising mortgage rates.

These pandemic effects should wane moving forward, helping to soften the pace of sales in coming quarters but it is still unknown to what extent the reshuffling will last. As households reassess new working, living, and schooling arrangements, there may be a continued level of re-sorting between urban and suburban areas, as well as broader regional migration shifts leading to a heightened level of home sales. 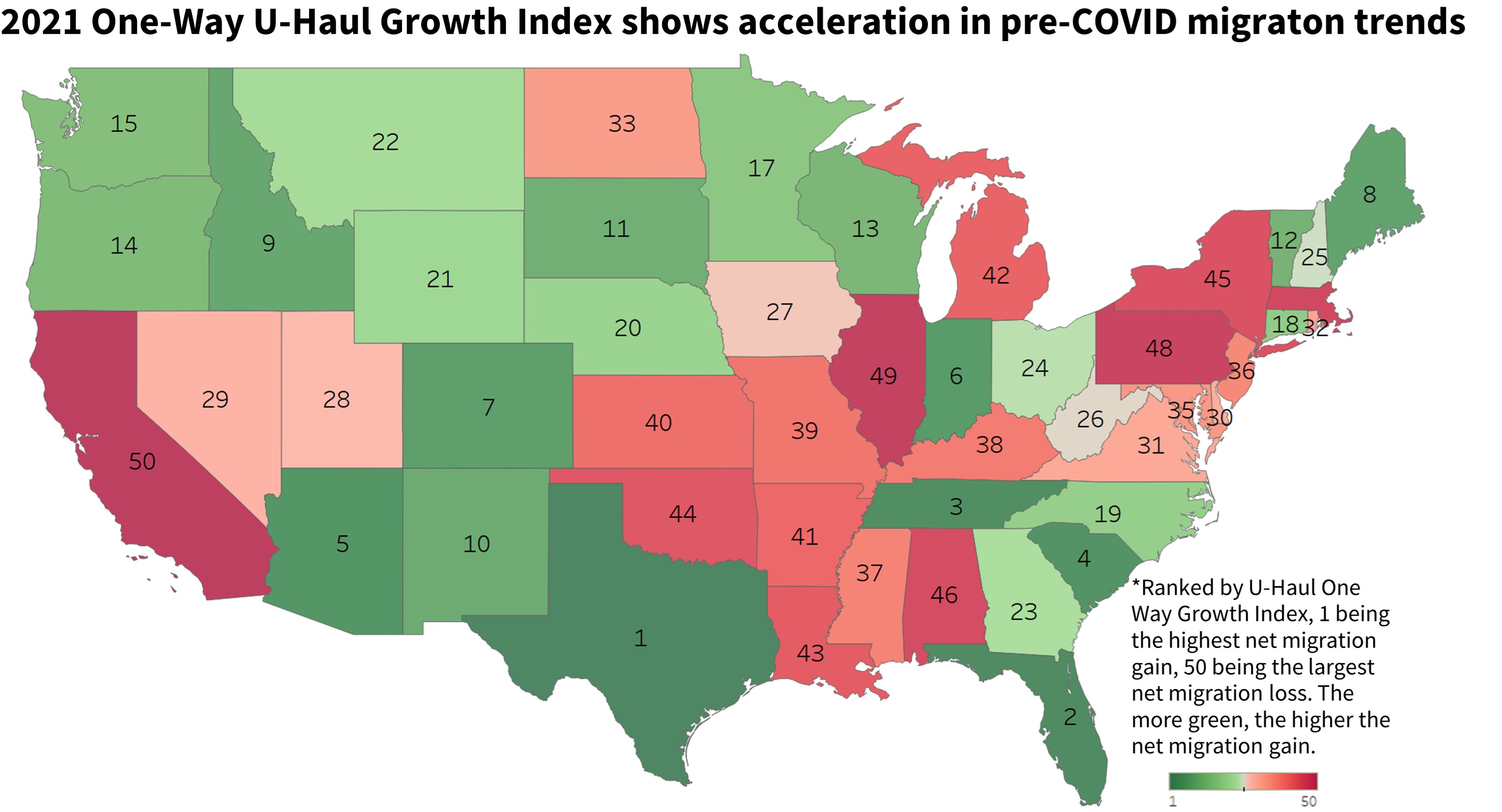 The forecast also notes a recent shift in home sales away from first-time homebuyers to a higher share of investor and cash purchases, especially in hot markets. Rental vacancy rates have heightened interest in single-family rental properties and Redfin estimates that investors bought 18.2 percent of single-family homes in Q3 2020 compared to 11.2 percent a year earlier. The demand might not last, but ESR says the long-run lack of inventory suggest it could. However, much of the activity could be "hot" money preferring performing residential real estate with its current low-cost leverage over low-yielding alternatives. Rising interest rates and decelerating economic activity could quickly reverse investor demand for housing, leading to fewer sales and slower appreciation, less competition for homebuyers, and improving affordability.

Fannie Mae’s December forecast for 2021 purchase mortgage origination volumes was revised downward based on incoming data but the forecast of future growth was revised higher due to strong expectations for home price increases. This year’s purchase volumes have been increased by $17 billion to $2 trillion and to $2.1 trillion next year, $27 billion higher than the previous forecast.

The refinance origination for 2021 was also revised up by $5 billion relative to last month while the 2022 forecast was downgraded by $25 billion to $1.3 trillion. The 2023 forecast is essentially unchanged from last month at $1.1 trillion, as the impact from stronger home prices and higher interest rates are projected to offset each other. At the current mortgage rate of 3.22 percent, the group estimates that about 32 percent of outstanding mortgage balances have at least a 50-basis point incentive to refinance.

Finally, the company says there are significant uncertainties about the direction of the macroeconomy and interest rates. Stronger than expected inflation, December’s 7 percent rate was the highest since 1982, could push the Fed into a swifter pace of monetary policy tightening. The ESR Group expects the first of three rate hikes in 2022 will happen in March rather than June and there are even hints of four increases. There were also suggestions at the Fed’s December meeting that, rather than simple tapering asset purchases, the Fed might shrink its balance sheet, potentially not too long after the first interest rate hike. With little history of such action, it is unclear what the results would be.