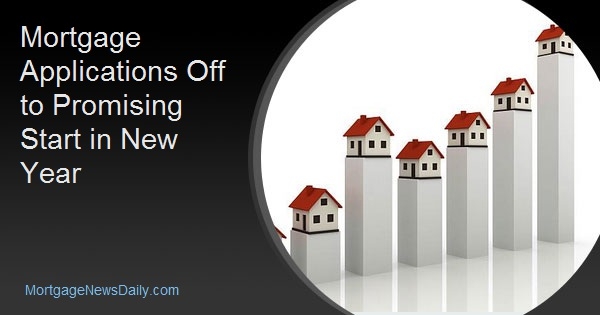 Mortgage Applications Off to Promising Start in New Year

By: Jann Swanson
Mortgage application activity gained ground for the second straight week, with significant increases across the board during the week ended January 13. The Mortgage Bankers Association (MBA) said its Market Composite Index, a measure of loan application volume, increased 27.9 percent on a seasonally adjusted basis and was 32 percent higher on an unadjusted basis compared with the previous week.


The Refinance Index rose 34 percent week-over-week but remains 81 percent below its level during the same week one year ago. Refinance applications made up 31.2 percent of those submitted during the week compared to 30.7 percent during the week ended January 6.

The seasonally adjusted Purchase Index rose 25 percent from one week earlier and was 32 percent higher on an unadjusted basis. Purchasing activity was down 35 percent on an annual basis.

Added Fratantoni, “Mortgage rates are now at their lowest level since September 2022, and about a percentage point below the peak mortgage rate last fall. As we enter the beginning of the spring buying season, lower mortgage rates and more homes on the market will help affordability for first-time homebuyers.”