How Long Can The Good Times Last For Housing and Rates?

While it wasn't quite the biggest surprise of 2020, the strength of the housing market was one of the best. The just-released numbers for December keep the good times rolling.

Leading the charge was December's Existing Home Sales report from the National Association of Realtors (NAR).  The annual pace wasn't quite at the recent 15-year high seen 2 months ago, but it hasn't really fallen since then.  No complaints. 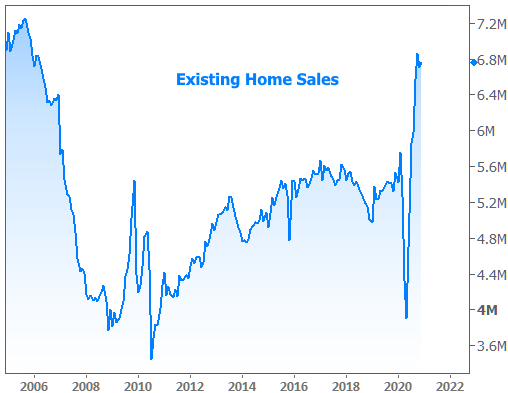 If you want to see more 15-year records broken, you'll have to rely on The Census Bureau's New Residential Construction numbers.  While not a direct measure of New Home Sales, the correlation is high (we'll get the official sales numbers next Thursday).  For now, we can bask in the warm glow of another long-term high in Housing Starts. 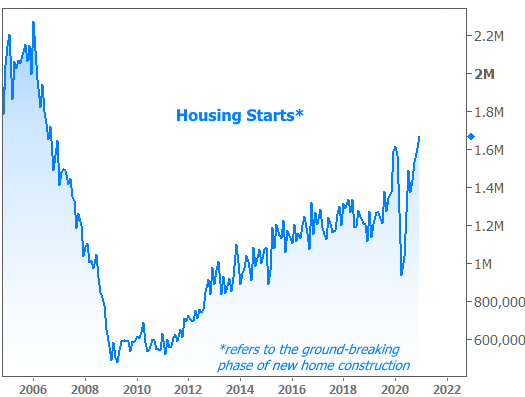 With sales and construction numbers like this, it's no surprise to see builder confidence remain in record high territory.  The National Association of Homebuilders (NAHB) reported another slight drop in builder confidence for January. The silver lining?  If not for the past 3 months, January's index would have been an all-time high. 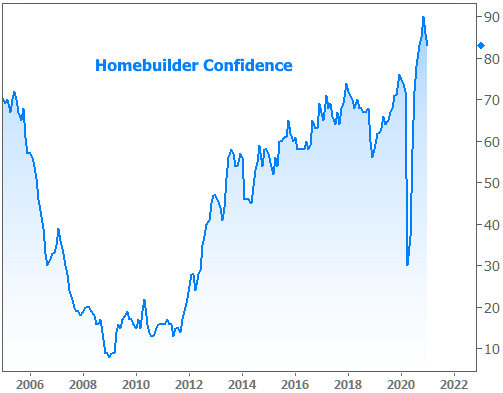 Silver linings aside, do builders know something that the home sales data has yet to tell us?  That's possible, but most of the drop was chalked up to higher costs for materials, and shortages of labor and lots.  In other words, the only thing the builder confidence numbers are telling us is that the housing market is a victim of its own success.

If we want to worry about the future of housing for more legitimate reasons, the most obvious candidate is the threat of rising rates.

Actually, there have been indications of upward pressure on interest rates for months.  That hasn't been immediately apparent in the mortgage world because mortgage rates diverged from their normal benchmarks in such an unprecedented way in 2020.

Chief among those benchmarks is the 10yr Treasury yield, which has been conveying a slow, steady rise in rates since August.  Mortgage rates, however, moved mostly lower since then, largely because they still had a lot of catching up to do following 2020's initial bond market shock. 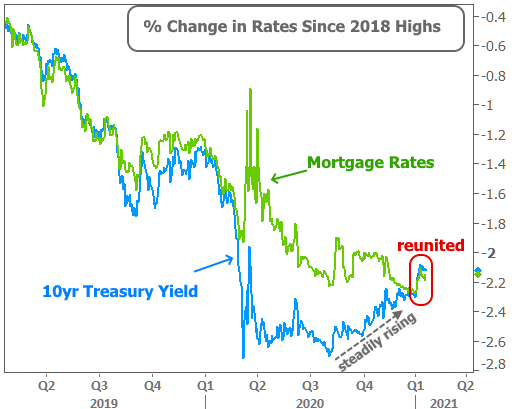 Now that mortgage rates have been reunited with Treasuries, so to speak, we can expect to see bond market volatility have an easier time translating to movement in the mortgage market.  From there, to whatever extent we credit low rates for benefitting the housing market, there is indeed some cause for concern.

Are we talking about huge, immediate concerns?  Probably not.  The trajectory of rates depends heavily on the trajectory of the pandemic and its economic impacts.  It goes without saying that covid won't be defeated overnight.  Moreover, progress may be uneven (2 steps forward, 1.X steps back?).  As such, even if rates continue trending higher, they would be hard-pressed to do so very quickly.

The week of the Georgia senate election was an exception, and rates have already recovered significantly since then. As of this week, the average lender was almost all the way back in line with early January levels. 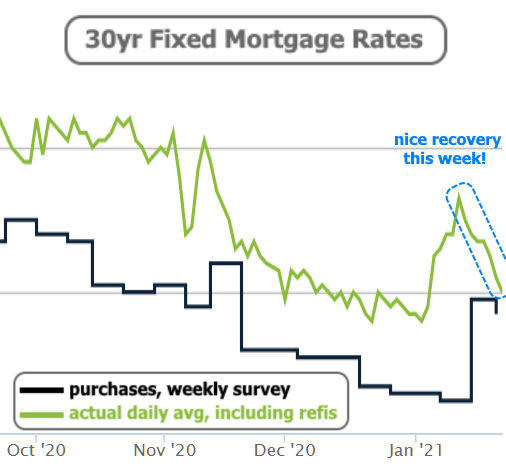 The week ahead brings more housing data with home price reports on Tuesday, New Home Sales on Thursday, and Pending Sales on Friday (a leading indicator for next month's Existing Home Sales report).  In addition the Fed releases a policy statement on Wednesday.  Given what we've heard from Fed Chair Powell recently, it's too early for investors to be looking for any major changes from the Fed, but hints about those changes will eventually be a big motivation for upward pressure in rates.