In the week just passed, bonds set out to react to the Fed announcement and a slew of important domestic economic data.  While all of the above exerted SOME influence on the bond market, Trump tariff tweets stole the show on Thursday morning with the announcement of another 10% on $300bln Chinese imports.  Stocks and bond yields tanked around the world in unison.  US bonds improved at their fastest pace of the week.  Notably, however, the Thursday morning trading environment was already pointing toward strong gains.

In the week ahead, although there is a smattering of econ data and a Treasury auction cycle, US/China trade relations are in sharp focus after overnight developments.  Specifically, China's central bank the PBOC (People's Bank of China) set its currency target right on the borderline of its weakest levels since before the financial crisis.  Markets promptly traded it well past those levels (over 7.0 Yuan to the Dollar).  To get a sense of how big the move was, here's a candlestick chart of Yuan showing the "gap."  We've never seen a gap that big in Treasuries relative to the past year's trading range. 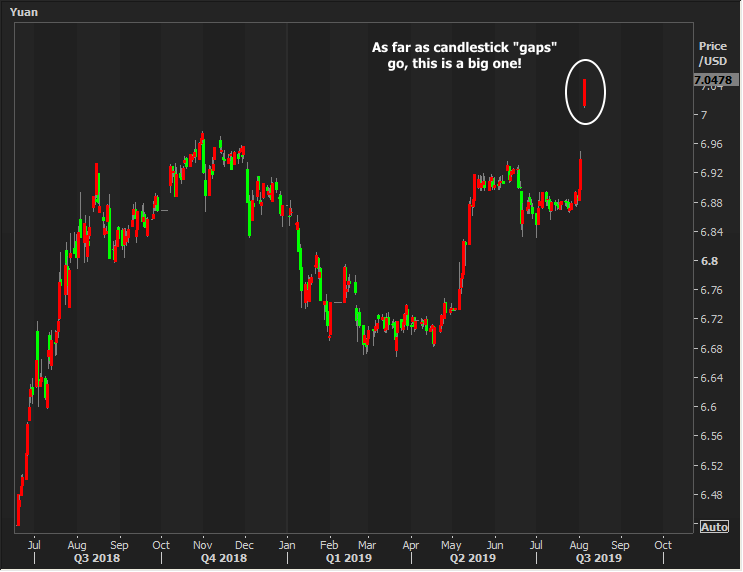 Breaking above 7.0 is an excruciatingly big deal for Chinese currency.  The PBOC has a rich history of open manipulation of the Yuan, and these sorts of decisions have often been seen at inflection points for global financial markets.  We can expand the Yuan chart and add some notes to explore this thesis. 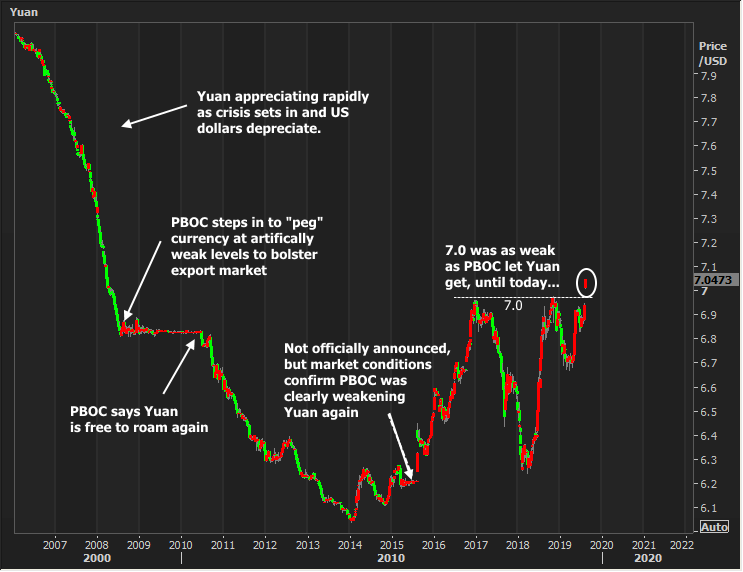 If you're looking for the simplest possible thesis about what's going on here, it's probably this: the Yuan breakout signifies China's willingness to brawl over trade/tariff issues.  An ancillary thesis is that markets are concerned about central banks losing control.  The PBOC's statement on these currency moves was less than reassuring.  It was the subject of an uncommon Sunday night update on MBS Live.  I'm going to re-post it below for posterity.

Bonds are rallying sharply overnight as the Yuan hit the weakest levels against the dollar since before the financial crisis.  The move follows as periodic rate-setting from China's central bank (People's Bank of China or PBOC).

The gains may or may not be intact by the domestic session open (10yr yields flirting with 1.76%), and indeed, I rarely write updates at this time of night for that reason.  But the following is worth an update just because it's so hilariously awkward.

What follows is a bullet point list of comments from the PBOC (People's Bank of China) following it's decision to peg Yuan at 6.99 vs the dollar (and subsequent panic move up and over 7.00).   Let's put it this way: have you ever seen someone try to convince you of an untruth be repeating the same thought multiple times in slightly different ways?

You might be trying just a bit too hard to maintain the illusion, PBOC!