MBS Live Week Ahead: Running Out of Superlatives to Describe Fed's Fury and MBS Volatility

There was a time when several billion dollars a day of Fed MBS purchases was considered a lot.  Then the Fed's coronavirus response happened.

The Fed didn't like what it saw on Wednesday and Thursday.  The already huge $5bln / day in MBS wasn't enough to prevent prices from tanking.  So on Thursday, they decided to bring out bigger guns by announcing an extra $10bln in bond purchases.  That easily made Thursday the biggest day ever ($15bln).

Despite the big guns, MBS simply doubled down on volatility and eventually ended up as the single most volatile day in the history of the secondary mortgage market.  Part of the reason was a late day announcement from the Fed about the following day's plans.  In addition to the $2.5 bln on the calendar, they would be adding another $32 bln!  This caused a surge in afternoon pricing on Thursday (rounding out the 2nd of two huge swings higher in price to offset 2 other swings lower in price).

Friday was special.  MBS started out fairly close to Thursday's latest levels but quickly began sliding lower in price as sellers continued coming out of the woodwork.  At that point, the Fed really got angry--not "angry" per se, but utterly determined to impose its will on the market (ok, maybe not even that, but 100% resolved to not let a lack of liquidity cripple debt markets, but it's way easier to just imagine the Fed turning into The Hulk and pounding MBS into submission with green fury).

The fury was channeled via another surprise announcement of $15bln (in addition to the $34.5bln mentioned above) for Friday and a $40bln bump to Monday's scheduled buying of $7.5 bln

For those playing along at home, the tallies were consequently as follows:

I'm pretty sure markets were ready to trust that the Fed would stay in Hulk-mode in the coming week, but the Fed decided not to leave anything in doubt.  Here's what they had to say this morning: https://www.newyorkfed.org/markets/opolicy/operating_policy_200323

Translation: $50bln per day, every day this week as needed.  And this is in addition to $75 bln per day for the Treasury market.

All of the above is why MBS were flirting with all-time highs this morning.  If this doesn't do the trick, it's probably best to retreat to the compound and check back in tomorrow.  Who knows... by then we could be up to $100bln a day.  Eventually, MBS will get the message if they haven't gotten already.

We're not expecting econ data to matter much, if at all, this week, unless ultra weak readings merely confirm a worse version of what we already know is coming.  Keep in mind that this week's GDP reading is for Q4 (meaningless now).

In terms of this week's market movements, EXPECT VOLATILITY.  You're going to be seeing the biggest back-and-forth swings you've ever experienced in MBS, unless you're only using last Thursday as your benchmark.  Even then, I wouldn't rule anything out.  Already this morning, we've lost nearly 3/4's of a point after starting out with twice that much improvement.  It's fairly impossible to think about or discuss negative reprice risk in any way that draws on past precedent.  We'll have to turn off our targeting computers and use the force. 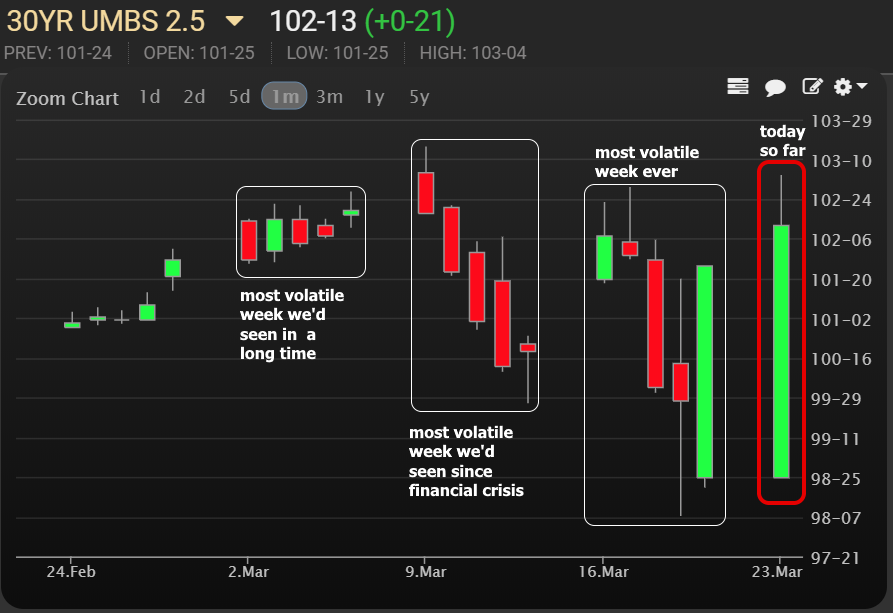