Over the past 3-4 months, the prospect of fiscal stimulus has done major damage to the bond market.  It wouldn't have been a surprise to see more weakness this morning due to the confirmation that the full $1.9 trillion made it through the senate (which is as good as full passage because the senate was the only real hurdle to clear).

Indeed, there was some weakness in the belly of the yield curve that some traders are chalking up to stimulus, but if that's the case, it's barely noticeable as the domestic session gets underway.  The real issue is that yields are not stampeding lower after Friday's drama.  The more time we spend in this new, higher yield range, the more we're confirming its validity.

What's the new, higher yield range?  It's still being defined, but here's a sobering factoid: for 7 straight trading days (since Feb 25th), 10yr yields have been unable to even attempt a break below 1.38%--one of several technical levels we've been tracking recently.  The next higher rung on the ladder is 1.44+, a level that was based on past precedent, but that also turned out to be relevant at the end of last week.

The past precedent in question is due to 1.44's role as the lower boundary of the "hitch" zone discussed a few weeks ago.  The "hitch" refers to a corrective consolidation (yields pushing back in the other direction in a narrowing pattern after a big, sustained move) that interrupts an even bigger overall move.  It's like a lightning bolt shape.

The hitch signifies a trading range that was extremely important/pivotal at the time.  It also happens to coincide with the past 3 instances of all-time lows.  While those lows have been in the 1.3's, sellers start to get antsy as soon as yields get under 1.5%.  Covid obviously changed that, but with covid hopefully en route to eventual containment, markets must wonder if the 1.3-1.5 floor area will be a thing again.  At the very least, the late 2019 "hitch" provides some context for where we should see things level off for the current sell-off. 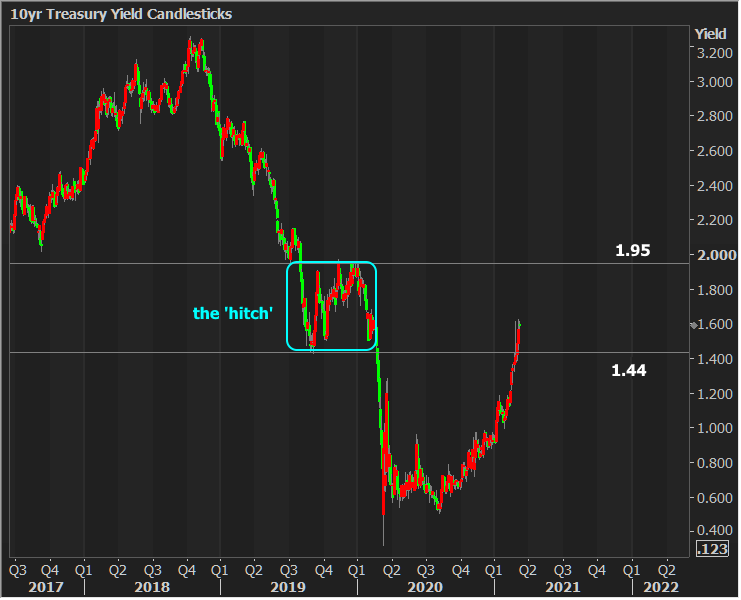 Considering the top of the hitch zone is 1.95, that's not really saying much.  So the more important role becomes one of identifying a friendly shift in the event of a break below 1.44+%.  With yields closer to 1.60% this morning, that would be a solid goal for the entire week.  Much may depend on how the auction cycle goes with 3, 10, and 30yr Treasuries scheduled at 1pm on Tue-Thu respectively.

We'll get 3 readings on inflation this week as well (CPI Wed, PPI and Consumer Inflation Expectations on Fri), but short of a massive surprise, it's still a tall order for inflation data to have a big influence.  Traders know it's coming, and we need to make it through the next 3-4 months of highly distorted data before assessing the real inflationary impact of the unprecedented stimulus cocktail (monetary from the Fed + Fiscal via covid relief).