MBS Live Day Ahead: 4 Ways to Look at The Trend Heading Into Year-End

For all practical purposes, today is the last trading day of the year.  In fact, based on volumes so far, today may actually be the first day of the winter holiday break.  Either way, we've certainly passed to last of 2019's "high consequence / high significance" trading days.  That doesn't mean we can't end up seeing some volatility over the next week and a half--just that any such volatility is much more likely to be the product of illiquidity and temporary factors as opposed to an indication of new, substantial momentum.

As has been and will continue to be the case, the most viable market-watching strategy at this time of year is simply to keep an eye on the prevailing trends and react accordingly if they make a convincing case for a shift or breakout.   There are at least 4 ways to approach this when it comes to longer-term rate benchmarks like 10yr yields.

1. The simplest approach would be to slap a few horizontal pivot points on the chart and call it a day.  There's nothing wrong with this old school approach and indeed, it can be used in conjunction with almost any other technical framework.  In other words, a "key level" is always a key level, regardless of the other math applied to the chart.  The most important key levels nearby would be 1.95% (just overhead) and 1.895 (the dividing line between yesterday's lows and Mon/Tues highs. 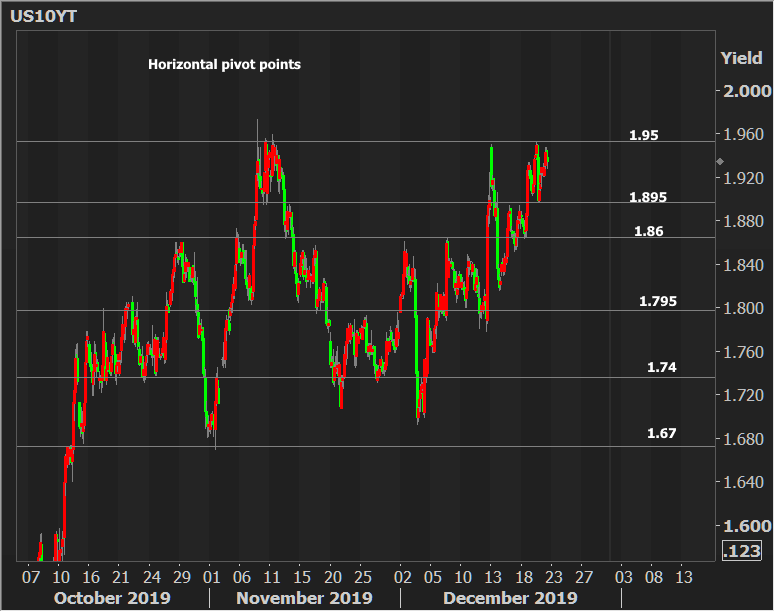 2. This is the broadest way to approach the past 2 months of market movement by using trend-lines connecting the highs and lows.  Doing so yields a symmetrical, flat consolidation pattern heading into Q1-2020.  While this makes a lot of sense with the fundamental landscape, it's worth noting that this is one of the riskiest ways to approach the market.  It wouldn't take much weakness to break the upper line. 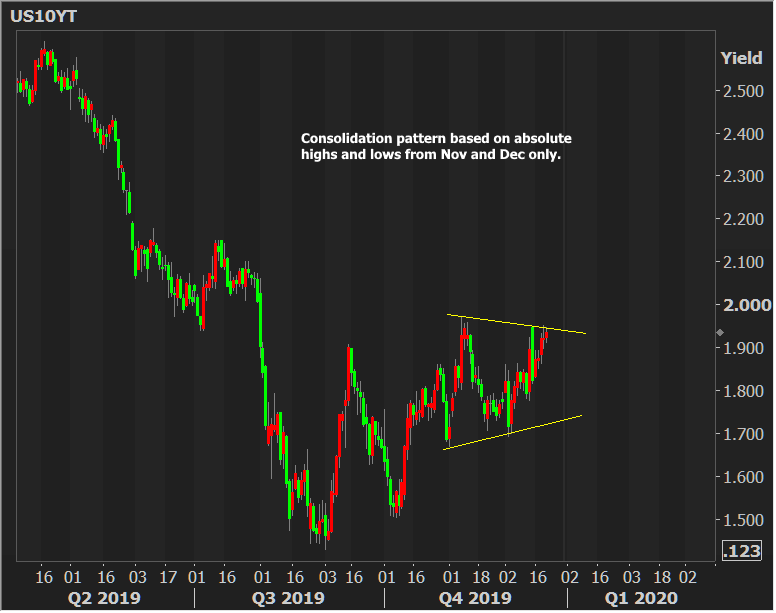 3. This approach uses "internal" trendlines.  While these don't capture all of the highs and lows, they encapsulate 80%+ of recent trading while still connecting as many high/low bounces as possible.  These are an often-overlooked type of trendline that I personally like very much.  Think of them as highlighting a sort of central zone of gravity with yields orbiting around that zone for better or worse.  This method suggests a bit more overrun potential for higher yields before matching the distances seen in the previous breakouts. 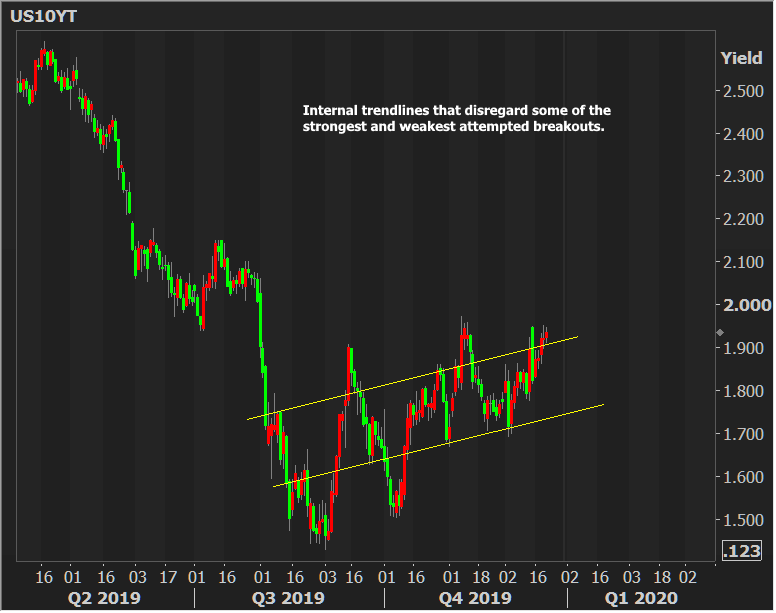 4. This is another iteration of using the absolute highs and lows to draw trendlines, but one that goes back in time farther than chart 1.  When we bring in those September highs and early October lows, it gives the consolidation trend a decidedly bearish slant. 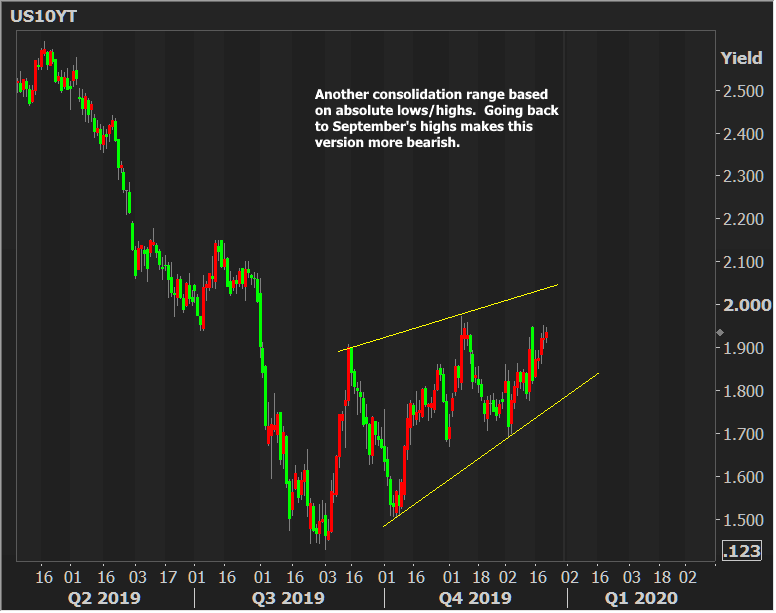 What does it all mean?

The last 2 charts could be combined to arrive at the conclusion that "yields are generally heading higher" since bottoming out in September.  This is a perfectly acceptable (even if slightly less pleasant) way to look at the broader trends.  After all, multiple risks flared in Aug/Sept and created massive uncertainty.  As those risks begin to abate, yields are logically moving higher.  This is the big risk I've been harping on for more than 3 months now.

The first 2 charts definitely paint a sideways picture, but it's important to note that they do so by relying on November and December trading.  If there is a time of year where we're more likely to see directional trends "pause" for reflection, this is it.  There's no inherent implication as to how the trend will resume, but it's safe to say that a vast majority of the trading community is expecting rates to find continued justification to move higher vs lower (which is probably exactly why we're pushing the upper boundaries of those horizontal trends).

Today brings several pieces of economic data, but traders are pretty well tuned out.  If one of the reports absolutely crushes (or completely misses) the forecast, the few traders left in the office could take bonds on a bit of a run, but such a move wouldn't necessarily be indicative of things to come as much as it would be simply an intraday risk to be managed.