It's been almost exactly 3 months since the quick rate spike in early September.  That, of course, followed an impressive run to the lowest rates in more than 3 years in August.  The combination of those long-term lows and the quick bounce set the stage for a consolidation trend that's been intact ever since. 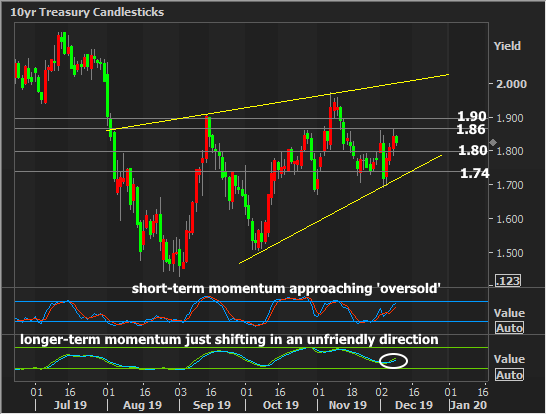 If we approach the range in horizontal terms, the week begins with rates almost perfectly centered in the most recent section of the range.  It's possible that the boundaries could be challenged, but it's not likely that we see a big breakout unless its prompted by an unexpectedly robust update on the phase 1 US/China trade deal.

Why might we see action on that front?  Simply put, December 15th (this Sunday) is the deadline for the implementation of the next round of tariffs.  If anything is going to happen to delay or cancel that tariff hike, it becomes increasingly likely as the week progresses.  Moreover, even if it's not seen during the business week, investors may keep their options open based on the risk of news over the weekend.

In terms of scheduled events, this week's headliner is Wednesday's Fed announcement and updated forecasts.  The Fed is expected to confirm that it's now in "wait and see" mode as it backs away from the fine-tuning rates cuts seen over the past 3 meetings.  This shouldn't come as a surprise to financial markets, but the Fed forecasts and press conference could prompt a rethink of some traders' stances heading into 2020.