MBS Live Day Ahead: Big Decisions to be Made, But Not Today

Due to the holiday-shortened work week, today's economic calendar is empty and Wednesday's was about as clogged as it ever gets, with the following reports all within the space of 90 minutes (except the early bird mortgage application data):

It really doesn't get any more action-packed than that, but in the bigger picture, bond markets couldn't care much less.  The trade war won't be resolved this week.  The several-months-worth of economic data required to confirm a major shift in economic momentum won't be released for--well... several months.  Trading motivations are a bit different due to the confluence of month-end and a weird weekend.  Bottom line, even if we get what looks like bigger movement, it may quickly change in the coming week when the trading environment returns to normal.  That too may change in the coming months when the economic picture and trade deal come into clearer focus.

Between now and then, bonds are trading in a fairly flat, and increasingly narrow range.  There are several ways to chart the range, but I think the most important one for this week is the recent, super narrow, super flat gap between 1.74 and 1.80.  Interestingly enough, despite several of Wednesday's reports making a case for break outside that range, we're still right in the middle of it.  That's not to say we will be by the end of the day, but even being there now is evidence of the sideways momentum. 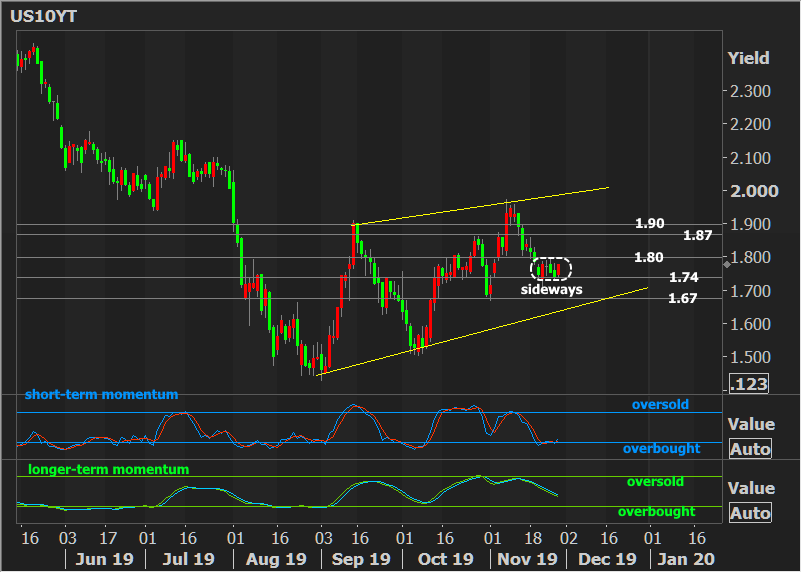 Let's close this out with a snippet from our friends at BMO capital markets who managed to put my thoughts about waning trade headline impact from earlier in the week much more eloquently in their commentary on Wednesday:

If the experience of the last 510 days of the trade war (for anyone counting) has left the market with any enduring impression, it is that a ‘grand compromise’ has been abandoned for a watered down ‘phase-one’ agreement which is proving to be far more elusive than the market initially anticipated. In recalling the numerous occasions in which media reports concluding ‘a China/US trade deal is close’ triggered a risk-on move and spiked Treasury yields only to be reversed by a moderate official tone, it is somewhat surprising just how willing investors remain to trade such ‘insights’. Perhaps the range trade in Treasuries over the last six sessions is a demonstration of an underlying headline fatigue which has set in and risks lingering until the market has a better vision of 2020. Alternatively, it could be a semantics argument and alternative definitions of the word ‘close’ as it relates to a trade accord. After all, the moon is relatively ‘close’ in a celestial sense; much less so if one is attempting to self-drive there in a cybertruck.