I'm sorry if the following is starting to sound like a broken record, but it's all we really have at the moment.  The bond market encounters these sorts of trends from time to time.  They're often seen after a substantial move either higher or lower in yield when markets are waiting for some sort of big flashpoint to play out.  Several past examples include the months leading up to the Brexit vote in 2016, and the first few months of Trump taking office in 2017.

Those examples are fairly specific as they pertain to external events that we knew we were waiting for (i.e. yes or no vote on Brexit, and "what sorts of policies and legislation are we going to see from the new administration?).  But other examples of this sort of pause for market reflection have to do with the state of the broader economy itself--arguably the most fundamental source of inspiration there can ever be for bonds.

2015 was a fantastic example of this.  Pretty much the entire year was spent in the same sort of consolidation we've seen over the past 3 months.  It culminated in the economy sliding to the brink of a very mild recession but ultimately avoiding it.  Paradoxically, yields continued to move lower due to European bond buying and the ramp up in Brexit fears in early 2016.  But the point is that it was "decision time" for the entire market with respect to where things were going to go from there.  Yields moved in a narrower and narrower range all year and with a bias toward weakness due to the technical correction from 2014's shockingly impressive strength.

Sound familiar?  We've had shockingly impressive bond market strength in 2019, and now traders are asking themselves if there's any reason for it to continue.  The slight bias toward higher yields is a natural reaction to that strength and the range-bound nature of this gradual sell-off is a natural byproduct of true uncertainty (the kind that is coming not only from the big-picture economic questions, but also the implications of specific flashpoints like the US/China trade deal).

The moral of the story is that the specific flashpoints will continue to cause small-scale volatility in the bigger picture, but the bigger picture currently consists of yields grinding sideways-to-slightly-higher in this broad consolidation pattern.  We're very close to the center currently, which is about as boring and indecisive a place as we can be. 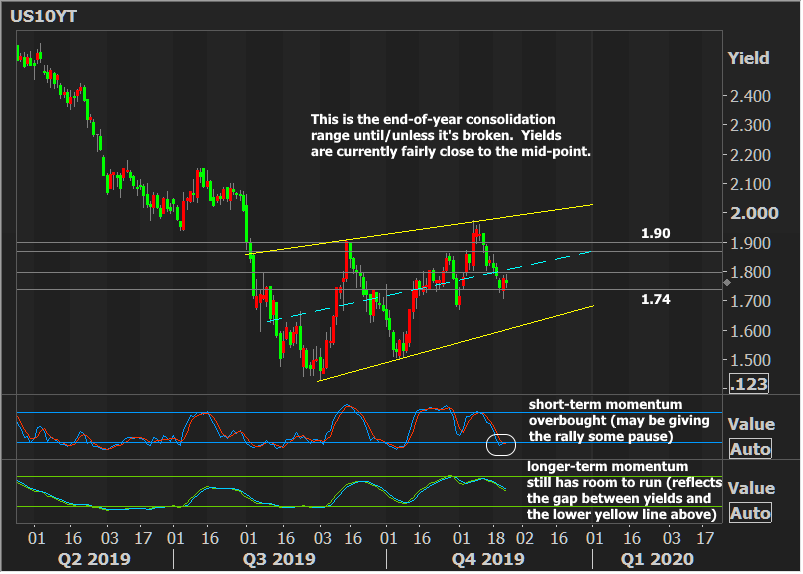