Daily and overnight trading volumes have been declining, and intraday trading ranges have been getting more narrow.  The starting point for that trend was the day after November 7th (when all the news hit about tariff roll-backs seemingly being in the bag for the US/China trade deal).  By the beginning of the following week (last week), we had the White House saying no rollback had been agreed to.  At the same time, bonds were working through the 2nd biggest week of corporate bond issuance of the year and breathing a sigh of relief as Powell did no harm during his congressional testimony.  A mid-week Trump speech also lacked any of the trade deal optimism that has been a constant enemy of low rates.

In short, there was a big blow-up for yields 2 weeks ago and then multiple reasons to recover last week.  But rather than accelerate back toward the center of the previous range, bond momentum waned and volumes continued to decline.  This is somewhat reminiscent of movement typically seen this time of year where bond traders increasingly tune out heading into Thanksgiving.  The only issue is that Thanksgiving doesn't happen until next week. 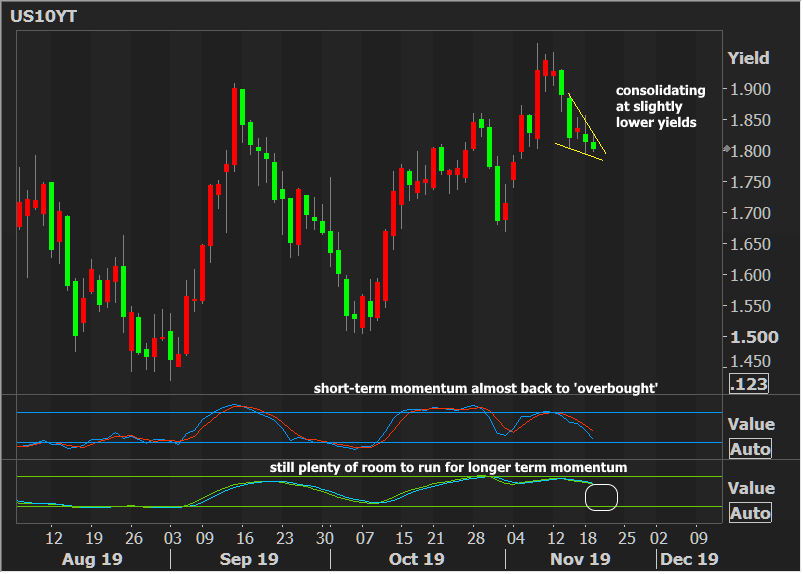 The extent to which bonds tend to consolidate heading into thanksgiving is borderline uncanny.  When it comes to market movement, few things can be expected with better than 50/50 probability, but this is certainly one of them.  There are notable exceptions, however, and one in particular that I won't ever forget.  It was 2012 and the first time I'd attempted to work somewhere other than my own office in the history of MBS Live.  My extended family was excited to finally get to spend some time with me (at least that's what they said!) because up until then, I'd generally been unavailable on weekdays during the holidays.  After all, markets are still technically open.

I figured I'd be able to jump into the makeshift office in the back room of my folks' house on the gloomy Oregon coast, check in with markets, then get back to family festivities while keeping an eye out for any significant market movement via the MBS Live mobile site.  As it turns out, they didn't get to see much of me, because bonds decided to blow up (relatively) for no apparent reason.  Then, as now, the week before saw an obvious consolidation with lower volume and volatility.  The chart below has the 4 trading days of Thanksgiving week in the white box. 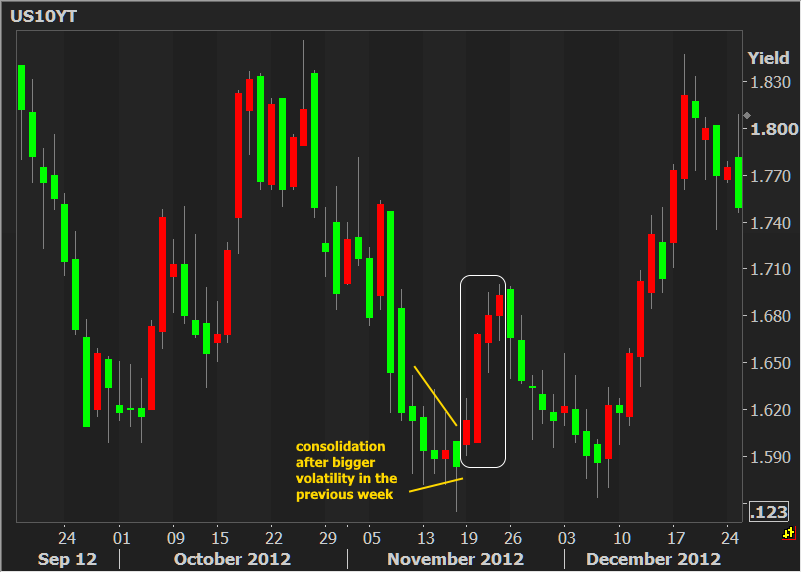 In hindsight, this turned out to be a random move motivated primarily by light volume and light liquidity on a holiday week.  In the current case, we're about 3-4 days early to that type of early consolidation seen in 2012, and 6-7 days early for the typical Thanksgiving consolidation.

What does it all mean?  The big takeaway for me is that we want to take upcoming market action with a grain of salt and carefully consider if the motivations match the movement.  With limited motivations on tap yesterday and today, that examination is yielding logical results so far, but I have a feelings we'll soon be needing to make sense of another pre-Thanksgiving bout of volatility.  Hopefully it goes in the other direction this time.