MBS Live Day Ahead: Best Levels Since February As Unseen Hands Load Up

Whether it's an imperfect catch-all term like "tradeflows," or a similarly imprecise reference to the "unseen hand," bonds often find motivation from factors that defy and transcend the market movers relied upon by the average rate watcher.  A much weaker economic report or friendlier-than-expected Fed communication... These are the sorts of conventional market movers that are well understood.  On the other side of the spectrum, there are things like short squeezes, technical triggers, curve trades, real money accounts scrambling to lock in yields before they move any lower, and many other trading motivations that don't make themselves readily apparent on anything other than a forensic level.

Read this post from a few weeks ago for an example of the last time we explored those sorts of forensics.  That episode had to do with a broad repricing of yield curve expectations following the mid-June Fed announcement.  It was generally focused on repositioning Treasury holdings out of the short end of the yield curve and into the longer-end.  A similar level of curve-flattening is in play this morning, but this time it's more to do with the longer end of the curve rallying while the short end is only modestly weaker.

Several 'unseen hands' could be in play for longer-dated Treasuries.  We've even heard talk about "real money" accounts (insurance/pension funds and other large, unleveraged money managers) making a strategic shift into bonds earlier than expected as they increasingly give up on yields making it up to more attractive entry points.  In other words, these money managers were looking forward to a well-timed trade that took advantage of the near-2% 10yr yields that seemed much more likely when rates were surging higher in March.  At this point, yields have fallen enough for those traders to cut their losses.  This is one of several reasons we can see bigger bouts of momentum after yields break various technical levels. 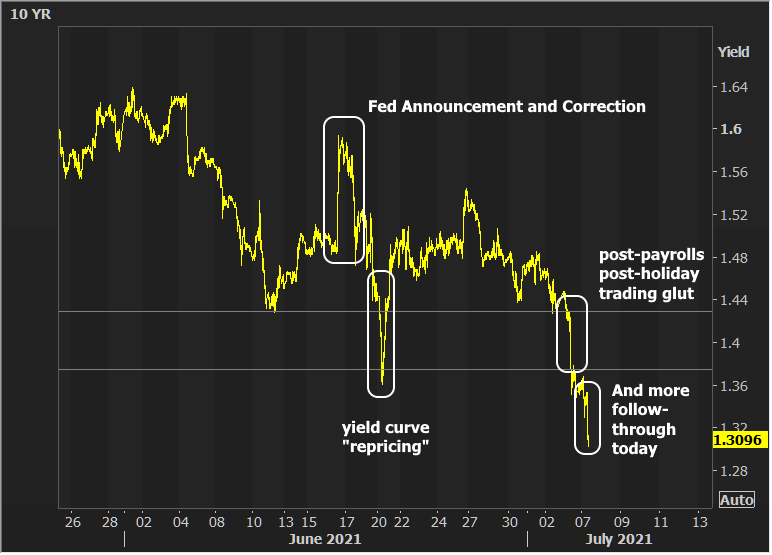 The curve traders may get a few more tidbits to digest today as the minutes from the most recent Fed meeting will be released at 2pm ET.  That's the only major event on the calendar--not just for today, but for the rest of the week.