Last month's jobs report shattered records, both for the outright level of job creation (2.509m) and for the gap between job growth and forecasts.  In fact, we won't likely see a gap that big, ever.

We may, however, see a bigger month of job creation, and if economic forecasters are right, we'll see it this morning.  The consensus calls for a payroll increase of 3.0 million.

Even if that happens, it remains to be seen how willing the market is to react to such things.  Last month's labor market numbers arrived at time when the market was more susceptible to second guessing the current ultra-low rate environment.  Covid cases hadn't really begun their recently troublesome spikes in several states.  And other economic data that week made it look like the economy may indeed have been able to pull off a V-shaped recovery.

This month is different.  Even a strong jobs number would likely be tempered by lingering concerns about "the 2nd wave."  In any event, there's probably not any number that has the power to nudge bond yields outside of the broader sideways range marked by 10yr yield boundaries at .57 and .79. 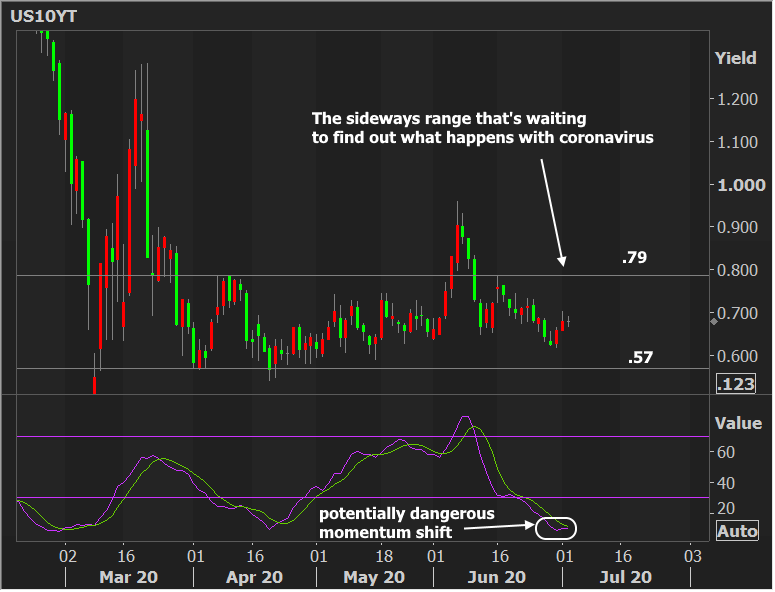 In addition to the jobs data, we'll also get Jobless Claims (weekly), factory orders, ISM New York, and the trade deficit.  None of the above are of much consequence compared to NFP although Jobless Claims data is the clear runner-up.  Bond markets close at 2pm ET for the Independence Day holiday and will be fully closed tomorrow.