MBS Live Day Ahead: Bonds Take a Few Steps Back Ahead of Another Light Event Calendar

Since the 2nd week of June, the bond market has been operating in a fairly narrow range with trading momentum being largely flat in the bigger picture.  That range is in slightly stronger territory compared to most of the previous 2 months with credit going, in part, to a weaker than expected jobs report at the beginning of the month.  Now, with the next jobs report days away, bonds are arguably setting up in the same sort of sideways pattern, ready to make an adjustment based on the data's implication for Fed policy.

10yr yields are operating between the mid 1.40's and mid 1.50's for now with only two quick breakout attempts: one after the Fed announcement 2 weeks ago and one more serendipitous example driven by illiquidity early in the overnight session last Monday. 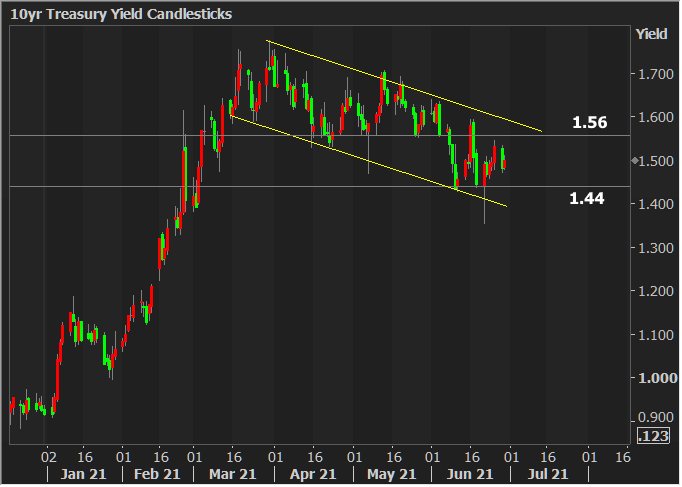 Serendipity will come into play once again today, in the event there's any major market movement to explain.  Reason being, there's no significant economic data on tap.  The only exception we could even remotely consider would be the 10am Consumer Confidence data, but it has a very poor track record of getting the market's attention.