MBS Live Day Ahead: Another Chance to Break The Range

Although markets are still sideways relative to the bigger volatility of the previous 3 weeks, bond yields have trickled lower this week. This brought 10yr yields just outside their prevailing range yesterday morning, but they moved back up by the afternoon. Now today, they have another chance to break the range.

The range, in this case, is upwardly-sloped.  Technically, that makes it a "trend channel" in market jargon.  Either way, we can plot lines resting along the highest and lowest closing levels each day, and those lines are parallel (yellow lines below).

Incidentally, we can also examine a perfectly sideways range with .74% as a ceiling of sorts.  Yes, yields have been over .74% on 7 days since early April, but it's also the one level they've been most hesitant to break above during that time.

If you're not familiar with candlesticks on charts, I included the secret decoder ring in this one.  They basically just give us a way to see open, high, low, close levels on any given day in the same space that would normally be only 1 point on the chart.  In other words, you wouldn't see the chart breakout outside the yellow lines on a line chart (except for the obvious breakout in early June).

I don't view this as a significant breakout.  It looks more like an incidental trickle due to recent market indecision surrounding a 2nd wave of covid-19 led by several hot bed states. 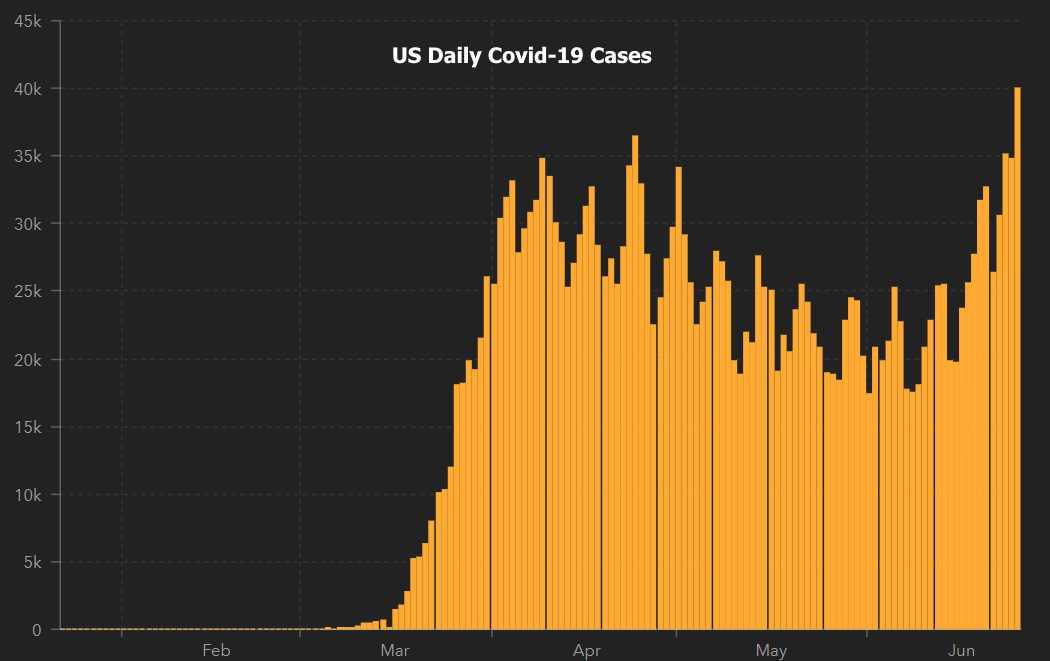 Granted, testing is up.  That makes case counts a less relevant metric.  Hospitalizations are all the rage.  The cause for concern is easy to see in CA, TX, and AZ (FL would be on the list too, but they apparently refuse to make hospitalization data easily available). 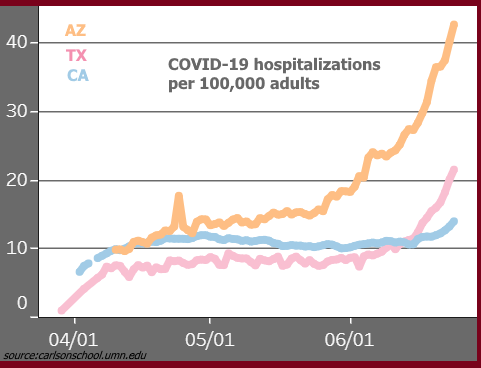 Hospitalization data still leaves lots of room for confusion due to other states' numbers declining rapidly and being significantly below their previous peaks.  Here's how the numbers above compare to NY/NJ, for instance: 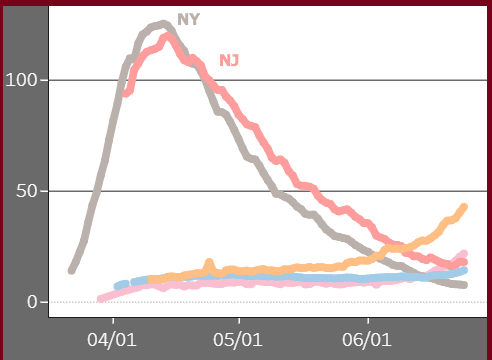 From there, we would then need to examine how each state has handled its reopening.  And what other factors could be contributing.  Needless to say, that's a complex task without one clear answer.  As such, it makes sense for both stocks and bonds to be hunkered down at levels that are neither panicked nor optimistic.  Both sides of the market are waiting for more information and that information comes in bits and pieces.

As long as the risk remains on the table that a 2nd wave of the virus will keep a lid on the economic reopening, rates will be able to remain low or move gradually lower.  But to whatever extent progress can be made in the other direction, rates would likely move higher at a pace already laid out for us by the trend channel in Treasury yields.