The Fed's messaging is in a state of flux to some extent, as they move away from the "full speed ahead until further notice" and toward an evolving conversation about tapering asset purchases.  As always, asset purchases are a critical consideration for the bond market.  Is it better to have more info, more frequently on that topic?  Yes and no.  It limits the risk of a big 2013-style taper tantrum, but it makes for more volatility between now and the official announcement.  While it's not clear what would have changed much since last week, we'll hear from Powell again today at 2pm ET as he testifies on the Fed's pandemic response.

When compared with the bigger-picture range in bonds, short-to-medium term volatility has a fairly limited range in which to operate.  With 10yr yields around 1.48 this morning, we're much closer to the lower end of this range.  Bond bulls see a contrarian breakout to lower yields due to timing.  Specifically, the Fed won't have enough data to make an informed decision for several more months.  Bond bears are concerned that next week's jobs report will pain a more clearly positive picture.  Taken together with the Fed's qualitative comments along the lines of "the jobs market being much stronger than recent data suggests," and these fears are not without merit.

Ultimately, the question that traders are seeking to answer is whether the economy is definitively on track to dispense with Fed support.  That scenario sees yields rising back toward 2021's highs in the coming months.  It also requires inflation to stay hot and foreign economies to be on a similar track (no major country can be too much of an outlier when it comes to growth and inflation in this globally interconnected economy). 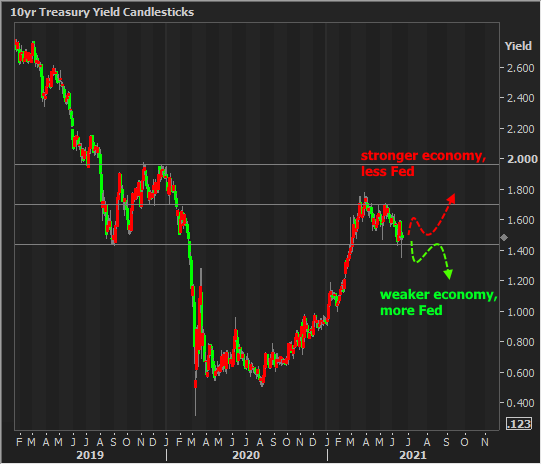