MBS Live Day Ahead: Time to Talk About a New Rate Ceiling Already?

Last week saw rates rise at the fastest pace in months in an apparent lift-off from an extended stint near all-time lows. Now the current week looks vastly different with bonds set to improve significantly for a 2nd straight day. Is it already time to talk about last week's highest yields being the ceiling for now? 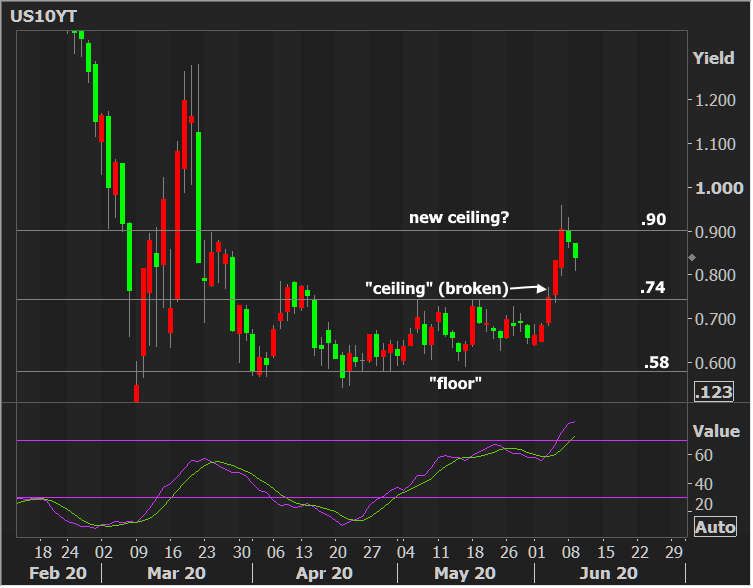 Sure!  We can TALK about it, but that doesn't necessarily mean it's going to predict the future.  If econ data continues in the same vein as that seen last week, it would be reasonable to see yields continue to grind generally higher.  That said, no one would sound crazy if they argued that 10yr yields really had no business surging back up and over 1% just yet.  There are still too many unknowns about the economic restart and the progression of covid numbers (which are best described as "flat" instead of "falling" for at least a month now).

Our friends at BMO Capital Markets have an even stronger assessment with respect to potential ceilings, saying "it’s clear the efforts to redefine the upper-bound of the trading range are behind the market for the time being." For what it's worth, they're referencing the intraday highs at .96%, but I think the established pivot point and closing high from last Friday at .90% is a more interesting battleground.  Either way, .90% is on the radar to a much greater extent in the event this week's heretofore strength gives way to weakness.

Today's only significant calendar event is the 10yr Treasury auction at 1pm.  The auctions haven't been reliable market movers of late, but they can have an impact.  Even if there's no major reaction, the simple act of making it past the auction without losing much ground in bonds would add to the case for last week marking the rate ceiling for now.