MBS Live Day Ahead: There's Something About 2.50%

2.50% has been more than just a reasonably round number marking the midpoint between 2.0% and 3.0% as far as 10yr Treasury yields are concerned.  Actually, I take that back.  That's exactly what it is, and that's exactly why it's been important in the big picture.

The first mega-rally for bonds back in 2008 started when yields were well above 3.0%.  In a single week, they moved from 3.75% to 2.98%.  After breaking below 3%, the quickly proceeded almost all the way to 2%., but notably bounced right at 2.5% for several days.  Ever since then, these big psychological levels have given investors pause.

In other words, rallies and sell-offs have clearly tended to slow down when approaching 2.0% or 3.0%.  That makes 2.50% an important line in the sand.  It can play the role of "resistance," "support," or "gatekeeper."  It has done this fairly regularly throughout the post-crisis era, even as underlying trends have come and gone.  In several instances, bonds have bounced on a trend-line that coincides with 2.50%.  In fact, that may be what we're seeing right now. 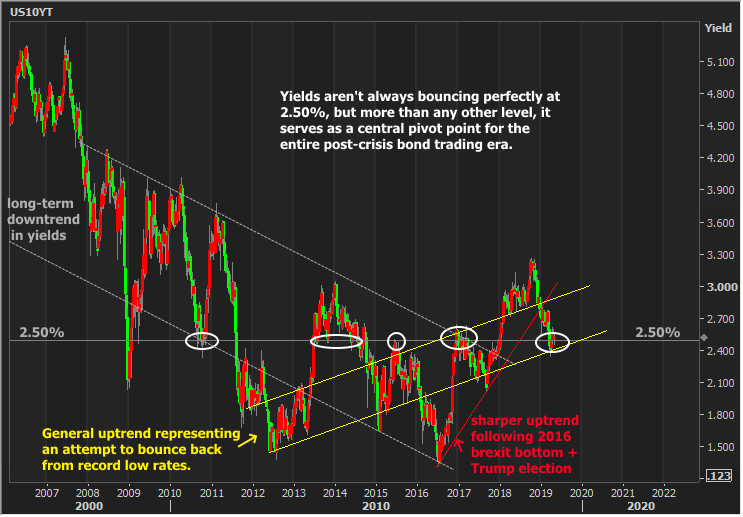 When we talk about 2.50%, or any super-big-picture technical level, it's important to know it's not always going to be exact.  In some situations, rates could move as low as the mid 2.3% range and sill end up looking like they were bouncing at 2.5% in the bigger picture (2010, for example).  In the current case, we've seen this play out in similar fashion with a strong case to be made for adjacent levels at 2.62%, 2.47%, and 2.35%.  Looked at another way, the walls of the stadium for bonds' current game could be viewed as 2.62% and 2.35% respectively and 2.50% is merely the midfield line.

In the short-term, intraday time frames, however, those boundaries are too wide to be meaningful.  We can zoom in to a more granular view and still keep tabs on the battle.  The first step to any potential breakout would be for bonds to get back to yesterday's pre-rally (and post-sell-off) pivot point at 2.504%.  Higher odds of a friendly breakout would kick in after moving below 2.496, which is why I referenced "half a bp" in this morning's first update on MBS Live. 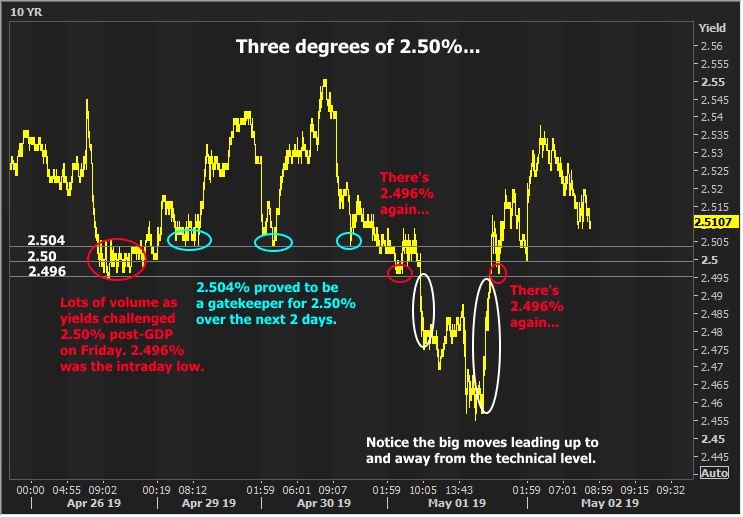 If you're thinking that we're far more likely to see a convincing move in bonds AFTER tomorrow's big slate of economic data (NFP and ISM, specifically), I agree with you!  In any event, weak readings on those reports would probably be prerequisites for that sort of breakout.  Between now and then, we just need to avoid moving too far away from striking distance.  To that end, the overnight highs of 2.538% offer a good initial boundary with 2.55% being a bigger deal.