MBS Live Day Ahead: Two Ways to Look at The Yield Curve

The yield curve--technically a reference to the full spectrum of Treasury yields versus duration/maturities (i.e. 2, 3, 5, 7, 10, 30 years), but often simply assumed to be the 2yr vs 10yr curve--has been a topic of increasing interest lately.  But that doesn't mean that INTEREST (in terms of rates) is increasing.  Well, sometimes it does and sometimes it doesn't.  I'll explain...

Because the yield curve is determined by one value minus another, it can move for a few different reasons or in a few different ways.  Using 2yr and 10yr yields hereinafter, let's count a few basic ways the curve can steepen (10s and 2s getting farther apart) or flatten (10s and 2s moving closer together).

And of course the inverse is true for all of the above:

Right now, the curve is steepening, so we know we're dealing with one of the first 4 "steeper" options.  Here's how I see it on the chart, which shows 2 different forms of steeping in the past several weeks:

Given the fairly linear uptrend in the curve, it's no wonder that interest (in terms of focus/attention) has increased.  While it is true that the curve is as steep as it's been since November, it's not necessarily a big deal just yet.  To be sure, the longer the time frame examined, the less significant any 3 weeks will look.  No exceptions here: 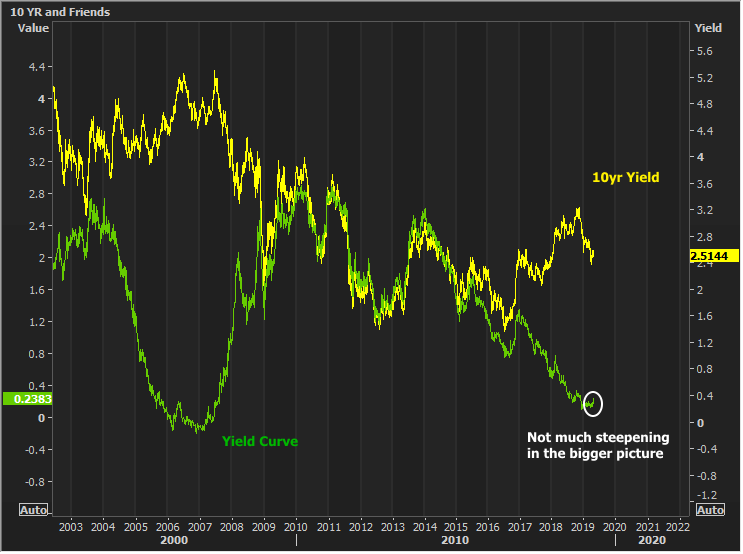 The 2009-2015 time frame is so perfectly aligned because those were the years where the 2yr yield was pinned to the floor by 0-0.25% Fed Rates.  The 2yr is never too far from the Fed Funds Rate and rarely moves in a different direction than Fed Rate Hike Expectations.

It can be a bit mind-numbing to look at a chart where one line is a yield and another line is a derivative of that yield.  So let's make the curve even more simple by putting 2 and 10yr yields on the same chart with the same axis: 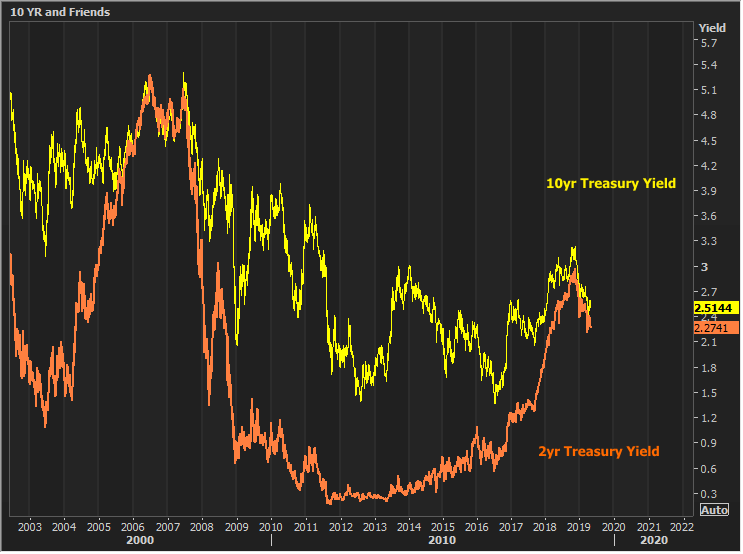 Here we see 2s drop to the basement while 10s go about their business.  Then we see the subsequent rise in 2s start small and pick up steam as Fed rate hikes get into full swing by 2017/2018.  Now that the Fed is "patient," it makes great sense that 2yr yields have come well off their highs.  At the same time, the yield curve is even moving up (steeper) or at least flat in the bigger picture (since late 2018 anyway).  The reason is simple: 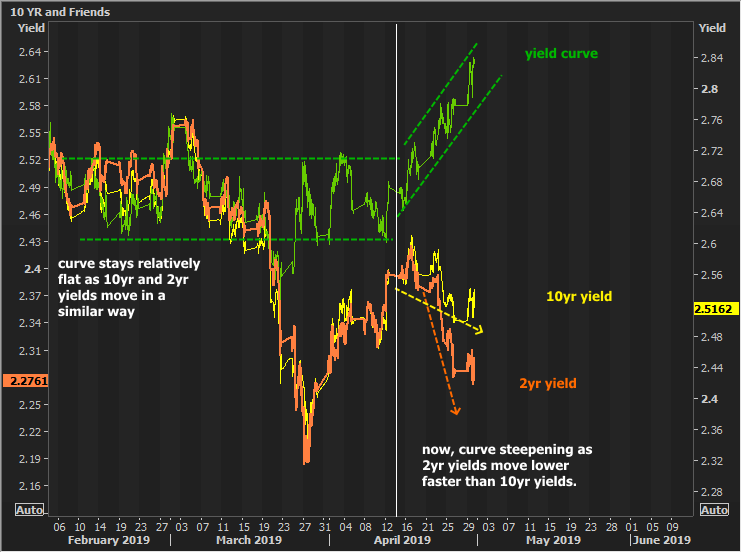 If you're going to focus on one chart today, make it the 2nd one.  Point being: it's far too soon and the move is far too small to draw any conclusions about the curve's performance in the longer term.  All we know right now is that the curve was trading in a very narrow range and then 2yr yields began to fall faster than 10s.  Inflation and a patient Fed are likely the biggest culprits there.  To that end, tomorrow's Fed announcement would offer important confirmation that the Fed still hasn't seen any reason to change its patient tune.