MBS Live Day Ahead: Data Doesn't Matter? Oh, It Will...

This morning's ADP Employment showed a loss of 27k jobs.  Forecasts called for a loss of 150k jobs compared to last month's report that was strongly positive at +183k.

Normally, when ADP or NFP job counts beat their forecast by more than 100k jobs, it's enough to prompt at least a little bit of bond market weakness (i.e. higher rates), even in the recent era where jobs counts weren't that big of a deal.  And it's a big deal for me to say ADP/NFP are not a big deal because they have historically been very big deals.  In fact, there is no bigger deal in the economic data world than NFP (the non-farm payrolls component of the big jobs report).

If it hasn't been a big deal for the past however many years, it's because the labor market has been so stable and strong.  Almost all payroll counts have fallen in a range between 126k and 278k since 2010!  The only major exception was a stint of time spent closer to 300k in 2014-2015.  With no visible deterioration in a decade, there hasn't been much reason for markets to react to jobs numbers.

As the current recession unfolds, jobs counts will be very important once again as they will help measure the depth and duration of the pain.  I've been reminding you about that here and there for several years now as the economic expansion grew older and older (and thus closer and closer to the next contraction).

Now the next contraction is here, to say the least.  Yet here we are with no reaction to the data.

The reason is twofold.  On a more superficial note, this is as simple as ADP going out of their way to point out that more pain is coming.  In other words, the data doesn't yet reflect the new reality.  That part is easy enough to understand, but how do we reconcile -27k with the 3.3 million jobless claims from last week and forecasts for another 3m+ tomorrow?

Simple!  Both ADP and NFP focus on a certain week of the month.  NFP states it's the week that contains the 12th of the month, generally, and ADP's stated goal is to emulate/predict the 2nd revision of the NFP number.  As such, it's no surprise to see ADP explicitly reminding us that the current report relied on data collected through March 12th.

And what hadn't happened by that week?  That's right!  The massive increase in joblessness was only a twinkle in the eye of the recession monster.  Jobless Claims reported on March 19th (for the week ending March 13th) were only 281k.  While that was up sharply from a recent average under 220k, it did almost nothing to represent the move to 3.283 million claims the following week.

That brings us to the second reason that today's data doesn't matter.  Simply put, we're not dealing with a gradual slide into recession where jobs numbers can help us identify a shift.  We're dealing with the biggest and sharpest shift into a recession in history.  It's well-understood that any jobs number that isn't showing that simply hasn't caught up yet.  Jobs data will be much more informative after it's clearly bottomed out and can then tell us something about how people are being REHIRED, as opposed to laid off.

To put things in perspective when it comes to payroll counts not yet reflecting the reality (and Friday's NFP won't either), here's a long-term chart showing jobless claims (inverted, so lower = more claims/more joblessness) and Non-Farm-Payroll (where lower already = more joblessness).  Note the depths of the most recent recession saw the two numbers at roughly equal levels. 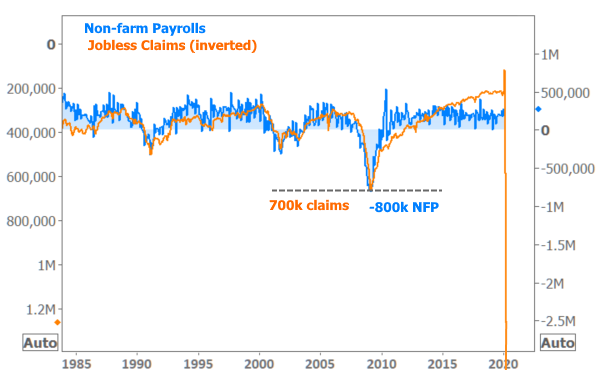 I had to set the y-axis range fairly narrow in order to still see the correlation.  If we gave jobless claims all the room they needed, the chart would look like this: 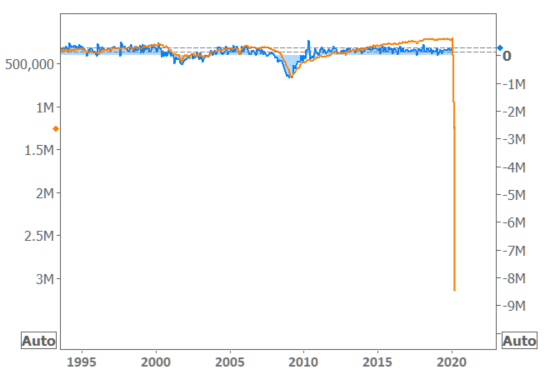