2021's rate spike is big enough and has been going on long enough that there is widespread speculation about how much worse it could get.  While it is true that more pain would only increase the odds of a bounce, it's also true that we've seen more pain on several occasions where many market participants thought we'd bounce.  Point being: rates can keep going higher from here despite the hope or expectation of a bounce.

But "going higher" can take several paths.  One common path with moves this big is for rates to level-off for several weeks (or even months) before continuing higher.  This "hitch" in the trend could already be taking shape, and today's 10yr Treasury auction is well-positioned to let us know if we should continue to hope for such things.

The auction essentially provides a litmus test for investor demand.  If it's exceptionally strong (or if bonds rally significantly before 1pm and the auction is merely "OK"), it would greatly reinforce the case for the top of the near-term range being 1.62%.  Why 1.62%?  No other reason than its recent performance in a ceiling-like role: 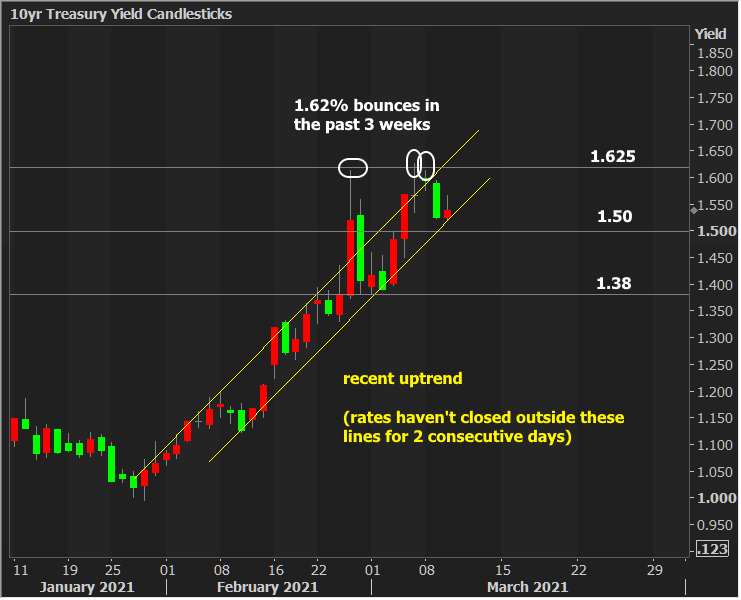 If we've learned anything in 2021, it's to avoid getting carried away with expecting a friendly bounce.  So keep in mind that weakness is an equal possibility today (i.e. perhaps we'll reinforce 1.50% as a floor instead of 1.62% as a ceiling).  Either way, auctions, in general, have had a bigger impact than normal recently.

Moving on to MBS, the 2-day charts look worse than they are due to THE ROLL.  Click that link for all the backstory, but the short version is that the left side of today's 2-day charts shows March coupons.  March coupons are in the settlement process now and no longer trading today.  April coupons have taken their place.  April coupons have been around for several months, but we don't show "back month" prices on MBS Live.  If we did, April coupons would have looked like the red line yesterday in the following chart: 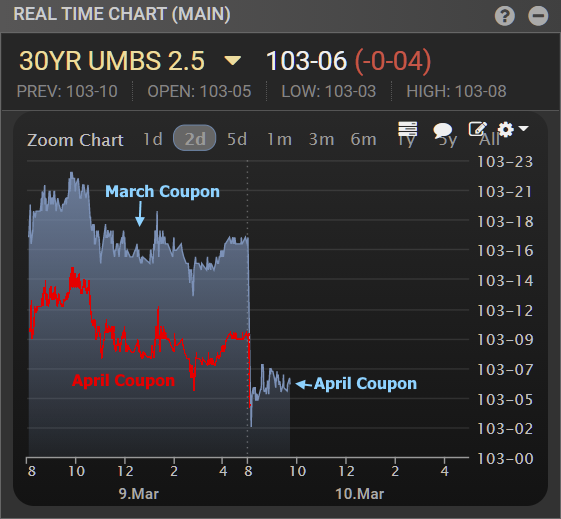