After the GA senate elections, the bond market immediately knew it needed to prepare for additional stimulus, even if moderate democratic voices might serve to limit the size and scope.  We hazarded a guess that this was worth 10yr yields rising 25bps, roughly and finding support around 1.17%.  Bond traders have now effectively made the same guess with yields switching into rally mode almost immediately after breaking above 1.17%.

If that sell-off was based on the expectation for additional near-term stimulus, then last night's Biden speech was exactly what traders had priced in.  The name of the game is "consolidation" now... the bridge... the intermission between the initial push up from super low covid-inspired yields and the significantly higher levels that traders can imagine in a future with much less covid and a much better economy.

The intermission's ceiling is up for debate, but as mentioned, 1.17% was a good guess.  Let's call it 1.187 though, as that's the high yield that 10yr Treasuries actually hit.  How much might we recover during this intermission?  Without a surprising amount of economic pain or covid resurgence, it would seem downright silly for yields to go back under 1.0%.  The highs from the day after the GA senate election were 1.054%, so let's start there.  In between those 2 levels, 1.088% and 1.125% have seen more action as pivot points than other random levels.  Here's how those levels look in the context of the longer-term uptrend (still assumed to be intact until it's convincingly broken): 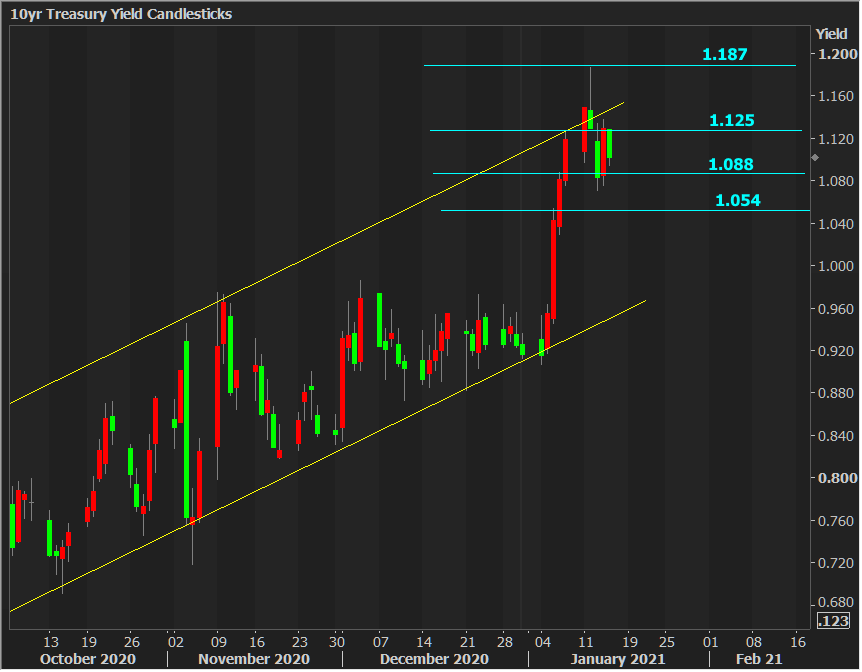 Econ data is less important to bonds at the moment, relative to political developments (mainly... how quickly will the next round of stimulus make it through congress?  How much weight will it shed before hitting Biden's desk?  And how effectively will Biden be able to accelerate vaccine distribution?)  This morning's Retail Sales number would normally have a more noticeable impact, but even after coming in at -0.7 vs 0.0, bonds have barely budged.