In case you missed it, things have been bad for bonds since last Thursday. A combination of factors conspired to push yields higher at the fastest pace since the springtime surge credited to vaccines, plummeting case counts, and fiscal policy.  Incidentally, all  3 factors remain in play to some extent.

The new vaccine info concerns potential approval for children under 12, and that would only add to the assumption that a recent decline in case counts will continue.  As for the present pace of case counts, the recent decline has slowed in the past few days--something that helps the bond market reconcile a bit of consolidation.

On the fiscal front, all eyes are on the stop-gap bill to avoid a government shutdown and allow time to hammer out details of the larger infrastructure bill.  D.C. drama isn't necessarily a huge market mover, but the 11th hour uncertainty likely contributed to the recent ground-holding as well.

If all of these factors were to be instantly resolved such that the government was spending as high as it could and cases were falling as fast as they had been at the beginning of last week, then yields would surely be surging to even higher highs.

As it stands, today's early trading falls in the same range as the last 2 days.  While that could be viewed as a positive sign--potentially suggesting a reversal, it's probably better viewed as a consolidation and confirmation of the past week of losses.  We'd need to see 10yr yields make a solid move under 1.50% to consider other conclusions. 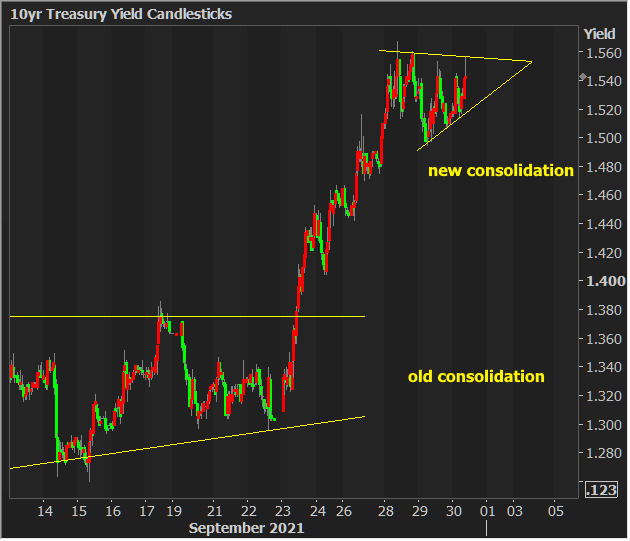