MBS Live Morning: Tapering Should Remain on Hold, But Still Lots to Consider on Fed Day

We've been pining for this particular Fed day for weeks, at least.  In fact, as early as June 1st, we pointed out that Fed speakers seemed to suggest their decision-making hands were tied until they could observe labor market changes at the start of the new school year.  Then in late July, we added the delta variant to that conversation as another reason to delay a tapering decision.  Epidemiologists guessed that case counts would peak in late August.  They were pretty close based on weekly numbers peaking in early September.

The Fed could take some solace in that fact--especially considering school has been back in session for several weeks and daily case counts are still declining week-over-week in most states.  The counterpoint is that the cases/deaths chart still looks like this: 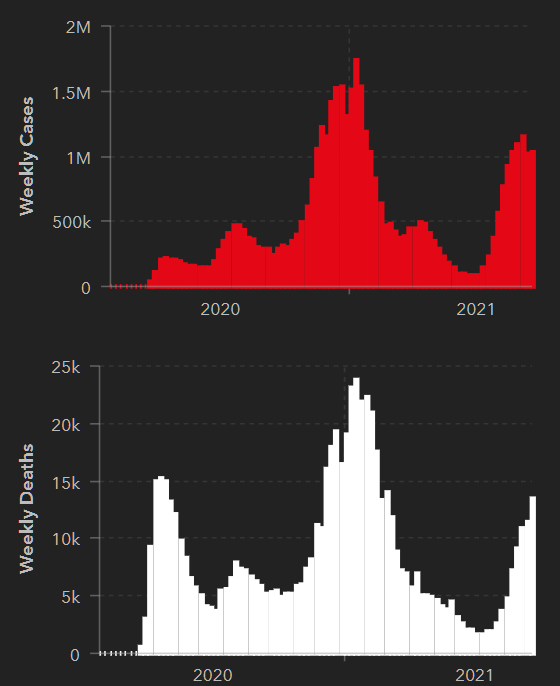 In other words, delta has taken a much more proportional toll to the previous wave than initially expected (i.e. deaths have been ramping up nearly as quickly as they did this past winter).  Even if that weren't the case, the Fed would still not be comfortable disregarding covid as an economic input while case counts remain this high.

Speaking of economic inputs, that's where the rubber really meets the road.  With or without covid, it's jobs and inflation that ultimately matter.  As far as Fed goals are concerned, they can already declare success on 2.0-2.5% inflation.  Market-based inflation expectations (10yr yield vs 10yr inflation-protected yield) have been super stable in the 2.25-2.40% range since leveling off in June. 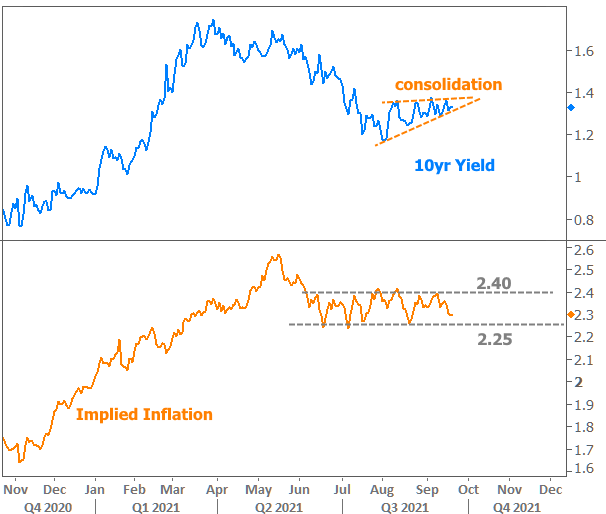 10yr yields, themselves, have been consolidating toward slightly higher levels for other reasons.  These include things like supply (both of new Treasuries and corporate bonds), fiscal policy, and of course, eventual changes in Fed policy.

That brings us to the most important consideration for the Fed: JOBS!

Rest relatively well assured in the following: had the last jobs report been closer to the +1m mark, we'd be having a serious conversation about whether or not the Fed would announce tapering at today's meeting.  As it stands, jobs came in at 235k vs a previous reading of 1.053m and forecasts calling for 728k--easily weak enough to ensure the Fed avoids pulling the trigger today.

That doesn't mean today can't move markets.  In fact, simply due to the fact that it's a "dots" day (the dot plot refers to the Fed's updated rate hike outlook), volatility is all but guaranteed--especially in the first few moments following the 2pm release of the announcement and the SEP (the "summary of economic projections which includes the dots).  The announcement itself could also contain another shift in verbiage that hints more forcefully at November or December tapering.  Then, of course, there's the Powell press conference at 2:30pm which could either accelerate or counteract the move at 2pm (assuming we have a directional move as opposed to a wide-ranging knee jerk.